If you google Commands and Colors, you’ll get a startling array of results all of which are connected to a simple game system for modelling warfare that’s become so wildly popular with board gamers that it’s spawned a mass of iterations across historical and even fantastical settings. However, ask most experienced gamers what the best of these titles is and they’ll tell you it’s Commands & Colors: Ancients from GMT games, which deals for the most part with the Punic Wars between Rome and Carthage. That publisher recently sent me a big box of various Commands & Colors material for review and, given that an iOS implementation is due from Playdek some time this year, Ancients seemed a good place to start.

All the Commands & Colors games operate on the same basic mechanical principles. The board is divided into three areas, left, right and center, and each player has a hand of cards most of which will allow the movement and attack of a certain number of units across one or more of those areas. So, one card might say three units in the center for example, another might be one unit in each area and so on. One card is played each turn. This is a very simple and intuitive way to model the chaos of command and control in real-life battle situations where your subordinates might well be unaware of or unable to comply with your orders for reasons beyond your control. Usefully it also offers some interesting tactical and strategic decisions, both on board and in terms of hand management, for the board game player. One of the reasons that Ancients is so feted amongst all the games that use this system is because the era is so peculiarly well suited to this model. In more recent warfare, order relays have been improved by things such as flag signalling and more recently radio, increasing exponentially the ability of a commander to command effectively. Back in the ancient days though, there was nothing but runners to communicate orders down the line and things could and did become exceptionally confused.

All Commands & Colours games also add more complex card effects into the deck and Ancients makes full use of these to maximise its model of ancient warfare for minimal overhead. A lot of cards allow you to give orders to units depending on their adjacency either to other units, or to leader units so you’re encouraged to fall in with ancient battle doctrine and try and keep your units in a line, with leaders at vital points of control. Again, usefully for the board game player, it also gives you a lot of tactical and strategic headaches to deal with in terms of trying to keep a cohesive front in the face of a system that naturally tries to split things between three areas of the board, the sorts of headaches that real-life ancient commanders would have had to deal with in trying to keep the flanks of their forces coordinated with the center. The simple and easy manner in which the mechanics put you in the right frame of mind for warfare of the era without you even realising it is just a joy to behold, especially when compared with the wealth of historical simulation games that hit the players with a ton more rules to considerably less effect. 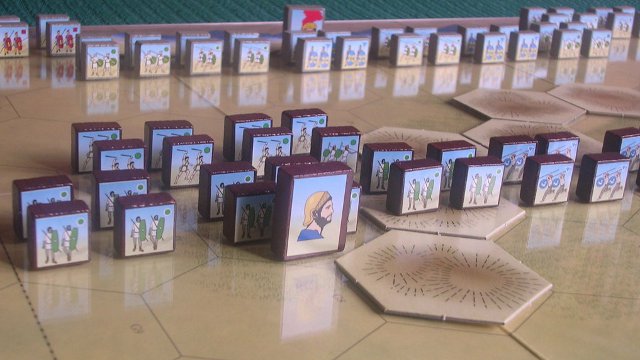 Sadly, while you do get an awful lot of strategic and simulation value from a relatively meagre 18 pages of rules, the game still suffers a bit from detail overload. There are a lot of different unit types in Ancients – 14 to be precise – all of which require very slightly different rules and have very slightly different stats. That’s a lot to take on board. The need for good leader positioning and line cohesion give you a lot to chew over in terms of decision making. And yet the essence of the Commands & Colours system is very much controlled chaos: combat is dice based and maneuver is card based and no matter how much effort to put into learning those rules and planning those moves, your entire game can still be completely screwed over by one unlucky turn. Ancients plays in about an hour, and set-up time, which is typically significant in its peers, is relatively quick thanks to minimal battlefield terrain, so this is largely forgivable. But I still find myself hanging back from a completely wholehearted recommendation on this game because of these issues: it’s simply that the Commands & Colours system feels like it’s better suited to lighter rules and faster, more immediately exciting play than Ancients can deliver, whatever it gives you in terms of simulation value and depth in return.

Which isn’t to say that the game isn’t exciting, more that it’s a slow burning thing that gradually builds towards a crescendo. You’ll start off struggling to keep your line in place whilst moving toward the enemy, and additionally co-ordinating missile attacks from light troops and flanking maneuvers from your more mobile cavalry and chariots. You’ll curse the dice, and you’ll curse the cards more. Then, at some point, one player decides he’s got the momentum and the cards to pull off the big charge, the light infantry will melt away, and a big part of the lines will clash for a grand melee and suddenly the tension is at fever pitch because in Commands & Colors: Ancients, enemy units you don’t kill or rout get to strike back at full strength and that means that in the space of minutes, it’s possible to go from being in the ascendancy to being ignominiously torn apart by the very enemy you’d thought to conquer. Thrilling? Absolutely. Frustrating? Sometimes, and doubly so when you’ve put in the effort to learn the rules and work through the strategies. That’s pretty much the highs and the lows of the entire game experience in one neat package. 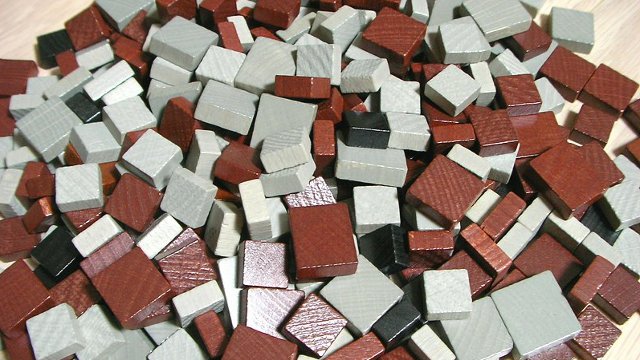 I don’t normally pass much comment on components nowadays: if a game is good it’s worth playing even if it looks awful, but there are two things you need to know about what’s in the Commands & Colours: Ancients box. Firstly, wargame publishers are not known for quality components and while GMT are know as a frequent exception to this rule, they’ve outdone themselves here. The board is mounted, the cards thick and well finished and the artwork both functional and striking. Secondly, units in the game consist of wooden blocks to which you apply stickers denoting the unit type. There are several hundred blocks. There are double the amount of stickers. Getting this game ready for play therefore requires a very considerable amount of time and effort. You can do a lot of it while you’re half-watching the TV or, better yet, just having a good chat but if the idea of carefully applying many hundreds of stickers to small bits of wood has you running for cover, avoid this game like the plague.

Even though I have minor reservations about the game play in Commands & Colors: Ancients and can’t therefore join the unadulterated love-in that it enjoys in some gaming circles, I have no dispute with the popular opinion that as a single, stand alone game, it’s the best of the entire Commands & Colors series. When you add in expansions things become more complicated but it’s still right up at the top as a contender. The effortless manner in which it draws players unwittingly into its simulation elements and the uneasy yet strangely addictive balance between luck and strategy that it achieves make sure of that. If you’ve never played a Commands & Colors game but have room in your life for a short military simulation for two, you owe it to yourself to try one, and the one you should try first is very probably this one. Hopefully, Playdek will work their magic and that opportunity will also come within reach of anyone who might otherwise balk at paying the asking price for a physical copy, or stickering all those blocks.