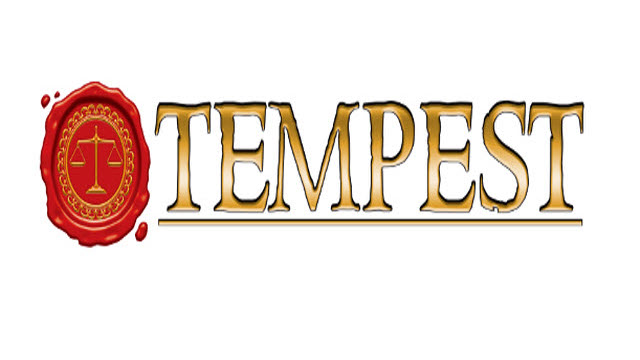 It’s certainly not unheard of for publishers to concoct settings and “worlds” that connect disparate games along lines of theme or setting but rarely is this approach applied to Eurogame-styled titles. Eurogames, barring expansions, tend to exist in their own universes with no narrative connectivity or resonance between them. AEG, who came up with this crazy idea of creating a “living” game world that would change as a result of organized play and other events in their long-running Legend of the Five Rings CCG, has come forward with a concept that attempts to do exactly that. The product line is called Tempest and the setting is a kind of ersatz Venice circa the Renaissance, with nominal historical trappings shunted aside in favor of in-game fiction, recurring characters and groups, and generalized themes of control, deceit, treachery, and politics.

Out of the gate, this idea runs into some issues because the games- Love Letter, Dominaire, Courtier, and Mercante- fall in line with the typical thematic expectations of the Eurogame genre, which is to say that narrative and specificity are de-emphasized in favor of mechanics and process. The Tempest idea emerges unfortunately as little more than fluff text and artwork justification, and the overwhelming sense I get from these titles is that none were specifically designed to be Tempest games.

This isn’t necessarily a blanket damnation of the line, because what we’re getting out of it are two solid if not particularly innovative Eurogame designs, one workmanlike clunker, and one absolutely brilliant out-of-the-park smash. But the question remains if the Tempest idea and the great artwork are enough to differentiate these titles from other Euros on the market or to persuade Eurogame fans to move on from old favorites or flavor-of-the-month titles to these not particularly extraordinary examples of area control, worker placement, and auction mechanics. 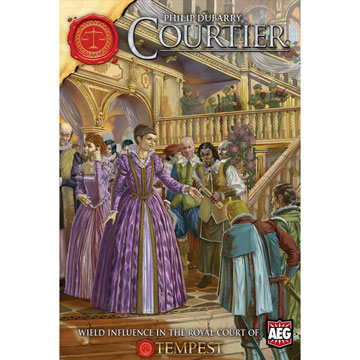 Courtier, designed by Philip DuBarry, is a two to four player influence game with shades of Ticket to Ride’s card drafting and goal cards that require players to control different courtiers and factions within social circles close to the royal family of Tempest. In game terms, this translates to using cards to place or dislodge wooden cubes from influence tracks to determine control while attempting to fulfill petitions by getting these people under your sway. Additionally, controlling a coterie grants you a special power.

It’s definitely a workable, not at all unappealing game. There are a couple of compelling ideas that elevate the game. I particularly like that there are two card decks to choose from when it’s time to draw or draft, one of which is focused on placing cubes and the other more on manipulation and “take that” effects. It adds an unusual strategic layer while also letting in a little welcome nastiness. It’s a little gamey, but there is kind of a neat thing with neutral influence and how you automatically control all neutral markers on your turn. This makes the demands on the petitions way easier to meet, but the rulebook declares the rule “cheese” in a variant that eliminates it. Don’t do that.

I’m also fond of the game’s timing mechanic. There’s a deck of “Fashion” cards that describe what’s going on at court culminating with the Queen’s arrest (read the story if you really want to know why). These cards add just a touch of narrative life. Maybe the Queen wore her hair down that day or something, breaking with tradition. These impart global gameplay effects but more importantly it makes the game feel at least a little less like a rank-and-file, soulless cube pusher. At 45-60 minutes and with a $35 retail, It’s a game that knows its place in terms of longevity and value.

Mercante, as the title would suggest, is the economic game of the lot. Designed by Jeff Tidball, I think I’d say it’s the second best of the games if only because I like buy low, sell high games and also because it’s something like an extrapolated version of Reiner Knizia’s classic Medici. Three to five players represent powerful merchant houses in Tempest, with each of course having a unique ability. The game action is chiefly purchasing individual goods or lots of goods at auction, selling said goods at fluctuating market prices, and using your profits to improve operations by buying additional dockworkers or agents (yes, this is a worker placement game) or warehouses to increase your storage capacity. There are also some nice direct conflict elements. You can steal from other players’ warehouses, play cards on each other, and artificially inflate prices at auction.

It’s a neat looking game even though it’s text- and numbers- heavy. It all looks like ledger sheets, shipping manifests, and so forth. It feels fairly thematic at least as far as business games go and the economic play is mostly appealing, as players take on contracts for delivery and attempt to meet orders. But there is one piece of this game that I absolutely despise because it is so artificial and unnecessary. It’s a victory point game.

It boggles my mind that the designer of this game couldn’t see that this is one where victory should be measured in dollars, not in VPs. It’s such a terrible design decision to have players buying and auctioning VPs over the course of the game with an end-of-game VP purchase. The value of completing a contract ought to be income, not VPs. It’s completely needless, and I honestly cannot come up with a reasonable explanation why the game was designed this way. I like the game, I like the way it plays and I think it’s a good buying and selling game but the reliance on VPs is definitely a big mark against it at a design level. 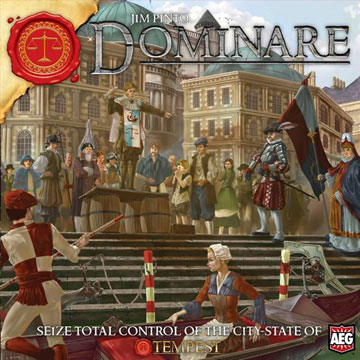 Dominaire is designer Jim Pinto’s entry and it follows on from the arrest of the Queen in Courtier. This is the “big” game of the lineup, and it is ostensibly the most complex one. It’s also the least interesting, a somewhat unoriginal game that repeats some of the area control and influence mechanics of Courtier but in a much larger scale with elements of geography. In it, two to six (yes, six) players attempt to exert clandestine influence over the city districts of Tempest, expanding and developing a conspiratorial cabal while attempting to limit exposure and the negative VP effects of dirty deeds brought to light. The more powerful and influential your people are, the more exposure your conspiracy faces.

Sounds great on paper, but in reality it’s another card-driven influence game with a couple of frills. I do like certain aspects of it like the conspiracy element, but it’s also one of those Eurogames that is extremely regimented and metered with very little room for the players to move outside of the rules. It’s a seven turn, 15 action game so everything you do is crucial. But it’s also a seven turn, 15 action game that takes anywhere from two to three hours to play. Event cards add some variety, but by and large this is a very dated-feeling game that reminds me of some of the Euros that were coming out in the early to mid 2000s. This is not a compliment.

Honestly, the ho-hum core mechanics didn’t hold my interest beyond a pair of test games. I can definitely see that it’s a game that needs a couple of plays and experienced players, I think, to really get the most out of it since there is a lot of information, positioning strategy, and card effects to consider. There is definitely depth, but it’s of a dry and particularly dispassionate kind and I’m frankly not sure if it’s worth putting in the effort to get at it. Play El Grande instead. 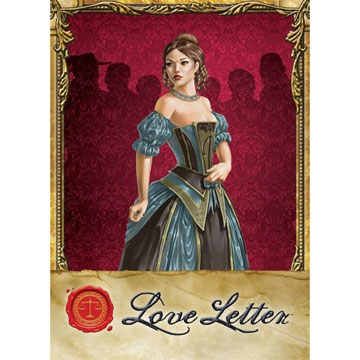 Finally, we come to the best game of the set and the best game of 2013. At less than three weeks in, at least. Seiji Kani’s Love Letter is a mini-masterpiece of refined, minimalist design. This is a game that comes in an embroidered velvet pouch, its components being only 16 cards and a handful of cubes. The rules are appropriately slight- this is a game about playing, not about rules. The concept is that the Princess of Tempest is receiving love letters from a variety of suitors and you want to get yours into her hands.

You’ve got a two-card hand. You play one card and simply resolve its effect, consulting the player aid card to see what it does if need be. Draw back up to two at the beginning of your hand. Whoever has the highest ranking card at the end of the deck wins the round. You are now ready to play.

But you see, there are eight ranks of cards depicting a Guard, a Priest, a Baron, a Handmaid, a Prince, The King, and The Countess. And of course the Princess, distraught over her mother’s arrest, is the last card. Her only effect is that if you discard or are forced to discard her, you are out of the round. Each of the others have effects that let you look at, swap, or discard other players’ cards. The lowest-ranking Guard lets you call out a card and if a player has it, they’re out of the round immediately. If you have the Countess and either the King or the Prince in your hand, they’re caught in a tryst and she has to be thrown out- a shame, since she’s only outranked by the Princess.

The idea is that you use limited card knowledge, observation, and these effects to try to come out at the end of the very short (like, less than ten minute) rounds with the top-ranked card still in play. There’s a little deduction element involved, and the need to play cards carefully and with the right timing is crucial. It’s a small, slight game so it’s not the most strategic or rich game on tables these days but it’s among the best “micro” games that you can buy right now. It’s accessible, appealing to a wide range of tastes, and almost completely without any kind of the usual rules overhead that attends hobby games. Groups that enjoy games like Citadels or even Werewolf will enjoy it, but do be aware that it is really intended to be a four player game, despite supporting two or three.

So there’s at least one absolute gem out of the Tempest bunch but even it wasn’t designed with this setting in mind. The Tempest concept is ambitious, but unfortunately not even the best game set there really supports its themes, narratives, or settings. I hope that AEG continues to explore Tempest. I find a quasi-historical, decidedly non-fantasy fictional game world far more appealing than, say, Terrinoth. I wouldn’t mind seeing something like a non-fantasy adventure game or a large scale wargame waged by whatever Tempest’s Condotierre are called. Regardless of genre direction, this setting really needs custom designed games specifically exploring Tempest- not tired Eurogame mechanics.