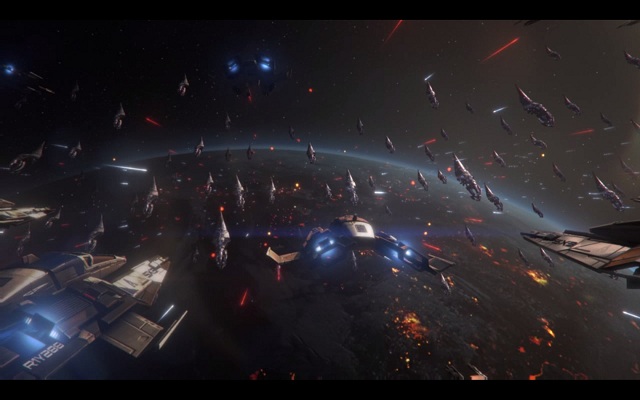 NOTE: There are some inferred “spoilers” throughout this post, but they are largely non-specific. The comments section is likely to be loaded with heavy spoilers. If you have to know nothing about how this series concludes, skip this post. If you just don’t want to know specific outcomes and events, you should be fine, but avoid the comments section. Any obviously spoilery text in the main post has to be highlighted to be read.

The one thing that’s stuck out to me most about the ending of Mass Effect 3 isn’t even about the game itself, but how it’s brought out the absolute ugliest in a whole lot of people – both those who hated it and those who didn’t. This feeling’s been compounded in the last 24 hours since Bioware revealed they might be changing the game’s resolution in some form or fashion. I can count on one hand the number of times I’ve closed Twitter so as to not have to read a flood of the same bile-tastic comments over and over again. March 21st, and the media pundit Twitter snark-fest that ensued, enters the record as one of those days.

I finished Mass Effect last Friday. The first three words that came to mind: That was fucked. At the time I wasn’t even sure if it was in a good or bad way. These things aren’t entirely clear sometimes and certainly what I saw in those final minutes was so unexpected as to require some reflection before dreaming up anything resembling a well-formed opinion. I’ll go back ’round to that, in a minute. First, a few words about the tempest in a teacup surrounding how Bioware chose to wrap this up…

Do I think it’s kind of silly that people need to be motivated by a video game’s lackluster conclusion in order to find charity money in their pockets? Yeah, I do. I’m all for Child’s Play racking up tens of thousands of dollars, but if you want to give, then give. Don’t make it about Mass Effect’s ending. Or do, I guess. What do I care? Filing FTC complaints and whatnot is so ridiculous it requires no further comment. Bad endings have been a part of story telling since the dawn of time. Go ahead and feel let down. Get mad even. Then, move on to the next thing – you were going to anyway.

At the same time, the level of derision I see aimed at this crowd, forcefully pumped into my consciousness from places like Twitter, may irritate me even more. Mostly I’m talking about people who consider themselves professional critics. The comments I’ve seen from a few individuals have gone beyond expression of contrary opinions and instead cross the line into outright contempt and hostility mixed with a healthy dose of holier than thou cynicism. One thing I’ve noticed about this business is there are critics in it who have no reservation whatsoever about using a legion of angry gamers as a cudgel to savage a developer when agendas align, but a heartbeat later will act like they’re above such mob mentality when said mob trucks on by them without their “leadership” to guide it. Such is the nature of people, I suppose. 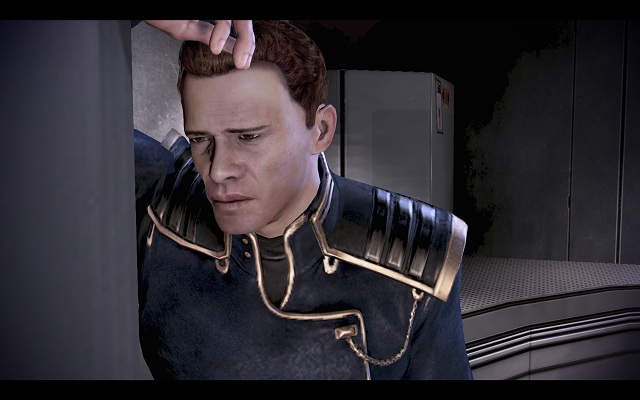 I’m not sure if it’s shame or futility I feel at adding my own contribution to the barrels chock full of useless diatribes about Mass Effect 3 and The Epic Ending Debacle of 2012. It’s probably both, but I’ve never shied from a quixotic jousting of a windmill or two, so why start now? Let’s talk about how this trilogy in the Mass Effect canon reached its conclusion…

The short version is this: The ending is bad. Bioware swung hard for the fences with having the “big” idea and they whiffed in equal proportion. This does not mean I’m about to lobby the FTC. Like I said above, bad endings are a part of storytelling. Bioware didn’t set out to implement an ending that wholly misunderstands what made the effort of getting their worthwhile in the first place. I actually rather admire how it runs full speed into a brick wall of stunning illogic. Wile E. Coyote would be proud. Whatever the result, it’s obvious they tried. They even hit on some interesting ideas in terms of the Reapers and what they represent. They managed to make The Crucible MacGuffin palatable, which I would not have expected after the first few hours of play. And along the way they gave several memorable characters some worthwhile send-offs.

So, why doesn’t this ending work? Is it because it supplants individuals for a view of the big picture so expanded that it tells you almost nothing about what’s happened to anybody or any group you might actually care about? Is it because the options at your disposal aren’t satisfying? Is it because there’s really no option or outcome you can point to and say it feels like a universal declaration of victory?

Form your own answer about that. I think it doesn’t work because it has nothing at all to do with everything you’ve been doing for three games, least of all Mass Effect 3. The bulk of Mass 3 is a game that is about accumulation of assets. Sometimes those assets are in the form of a ship or artifact. Sometimes in the form of an army. Sometimes it’s a squad or individual. They’re all weighted for an overall effect. The problem is that the number, relative to the end game options it unlocks (or locks away), is entirely arbitrary. If it’s under threshold X then you have these two choices. If it’s over said threshold you have these three, but then this thing happens. If it reaches the next threshold you’re back down to two options, but then this other thing also happens. It’s not, in any way, a coherent cause and effect. That is bad writing, bad planning, bad everything.

To illustrate this point I have to enter some spoiler territory. Highlight the text to see it…

The options at your disposal -control the Reapers, destroy the Reapers, synthesis of man and machine- don’t have anything to do with your War Assets in a logical way. The War Assets are just a number to slot you into which combination of these items are at your disposal. If you failed to assemble many galactic fleets it’s not going to affect whether or not the Crucible reaches Earth. Failing to round up an adequate ground force doesn’t mean Shepard won’t make it to the Reaper transport beam back to the Citadel or that he’ll be in a different kind of shape when he gets there. No matter what you do throughout the game you will get the same rush through the climax that everyone else got. For a game that is all about coalition-building, for the strength of the coalition not to actually affect the final battle sequence at all is dodgy at best. By the time Shepard is busy making his choice on behalf of galactic civilization, how big your fleet is or how strong your ground forces are should make no difference whatsoever. Look at this way: If you don’t broker peace between the Quarians and Geth, maybe you fall short of the war assets needed to choose synthesis. But then what does brokering peace between Quarians and Geth have to do with synthesis? Oh, right. Nothing.

Compare this to the ending for Mass Effect 2, which, boss fight aside, I regard as one of the better final few hours of any game I’ve ever played. Everything about how that game closes out, from the moment you enter the Omega Relay, is about the decisions you made throughout the game. If you don’t outfit the Normandy properly, you take more damage and risk more of your crew. If you haven’t ensured everyone’s loyalty they are unlikely to survive any mission to which you assign them. Even the ones that are loyal to you are at risk if you make poor decisions about how to utilize them. Mass Effect 2’s final act is a culmination of everything you do in that game. 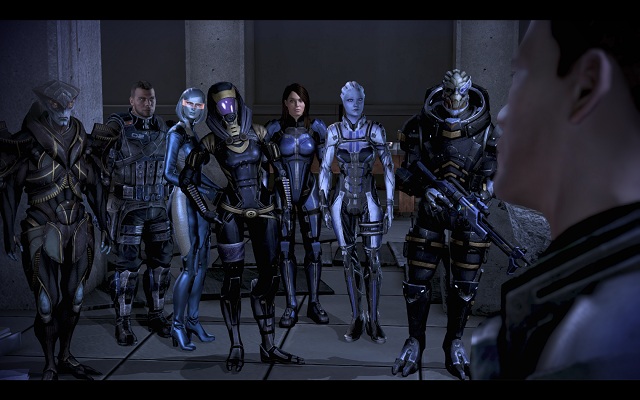 The problem with Mass Effect 3’s ending isn’t whether I like the tone of it or whether I think it’s too happy or too miserable or too vague or too devoid of digital tits. The problem with it is that the first 99% of what you do in the game is in no meaningful or logical way connected to the final minutes. As disappointing as that is, it’s also freeing in a way. When I sit down to replay the game with my Renegade Shepard, which I am sure to do, I am not going to obsess over War Assets and Galactic Readiness and how all that will determine my ending. The ending, no matter what I do, is awful, but the experience of getting there is still meaningful. I still…

…changed the course of Jack’s future. I still broke Ashley’s heart. I still helped Tali return home and find peace. No, I don’t know what becomes of her when the end comes. I don’t know if Garrus goes on to be a leader to his people or if he’s stranded on Earth. I don’t know if Miranda grieved for my death. Or am I even dead? Perhaps I’m like Kirk describes Dekker in Star Trek: The Motion Picture – missing…

…These are all things I’d like to know in some way, even if it were a bunch of text epilogues like in Origins. (I know many people hated those. I was fine with them.) But even though I think the game’s ending fails on so many levels it’s hard to know which one to focus on for the purposes of criticism, what it does not do is invalidate the journey and I think that’s where a lot of fanbase ire misses the forest for the trees.

Theirs is an understandable reaction, however. They feel let down. Betrayed. And they want to go somewhere with all that anger. Some of them are doing it in more productive ways (Child’s Play drives) than others (forum ranting and FTC threats). But that’s always the result when you have an enormous group of people reacting to something they’re passionate about. I’m less understanding of people who seem unable to let them have, and come to terms with, their anger. It will ebb and they’ll move on. Leave them to their grief about the game’s culmination, melodramatic or inappropriate as it may come out in places, and simply stick to owning your own ideas. The mud slinging is embarrassing to everyone involved and, with yesterday’s announcment, officially has come to overshadow what’s most important about Mass Effect 3:

It’s a damn good game, no matter how it ends.