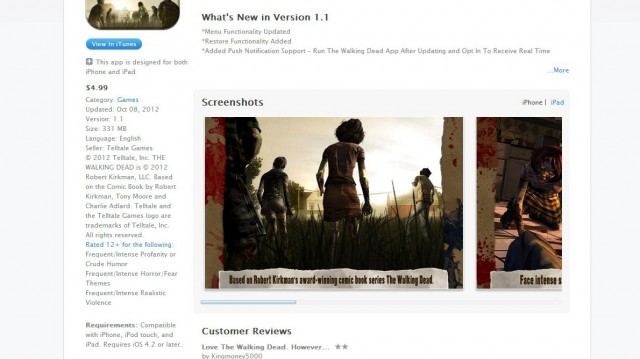 A couple of weeks ago, after all the great reviews here on No High Scores and a heartfelt recommendation from Lucy James, I bit the bullet and bought Telltale Games’ Walking Dead: Episode 1 for my original iPad. I figured it might put a bit of a strain on the hardware so before buying I looked at the iTunes page, which you can see reproduced above. It said nothing about iPad 1 compatibility issues in the bottom left where the requirements are, or the description, so I went ahead and bought it.

It ran, but so slowly as to be unplayable. An installation problem, surely, since I’d carefully checked the requirements before buying! So I restarted the device and closed all the background processes. Still too slow. So I googled it. And then, only then, did I discover that it’s not compatible with the original iPad. And the description does in fact mention this fact: several paragraphs down in the description, only visible if you click the “more” tab.

So I felt justified in emailing customer support, pointing out how I’d checked carefully beforehand, politely asked for a refund, and mentioned that I’d go buy it on XBLA once I’d got one. They refused, saying it was stated clearly in the description. I sent the screenshot above, and my receipt so they would know I wasn’t freeloading. So they agreed, great! But then, a couple of days later, another email saying they’d examined the issue and the compatibility was clearly stated, so no refund. So I again pointed out that it wasn’t clearly stated when I looked. And they agreed again, great! But then same again, another support monkey replies to say it’s clearly stated so no refund.

And so here we are. Telltale have now updated the iTunes page to put the warning at the top of the description where it should be. But as my screenshot demonstrates that’s not what I saw when I bought the app. I won’t be buying any more Telltale product, so over £3 they’ve lost an XBLA sale for the whole series and a lot of potential future purchases. Madness.

I’d like to ask you all to look at that screenshot and tell me if you think it’s clearly stated that the app wouldn’t run on my device, and that I’m out of order asking for my money back. If you agree with me, I’m left with little recourse but to warn you all not to expect great service from Telltale games.