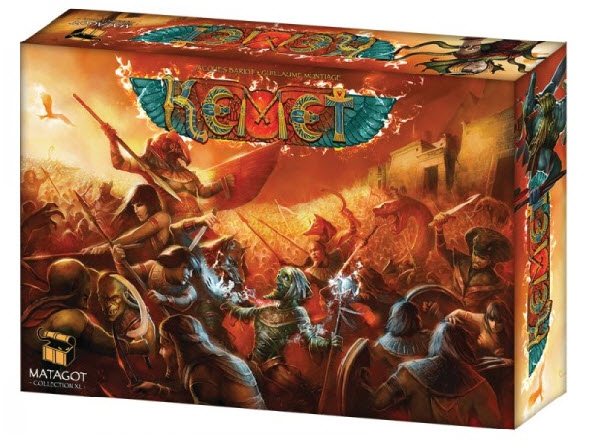 The first thing you’re going to want to do with Kemet is to compare it Cyclades, the brilliant hybrid Dudes on a Map (DoaM) game from a couple of years ago that impressed many gamers including myself with its stunningly economical yet baroque and flavorful design. Like its predecessor, Kemet is a big box Matagot/Asmodee release and it’s of French origin. Both games are well-illustrated and packed with great-looking miniatures and ultra-tight rules that play fast and loose with DoaM conventions of geography, resource management, and process. Both games are completely reasonable in terms of playtime, even with full tables. But whereas Cyclades was about the men, gods, and monsters of the ancient Mediterranean, Kemet goes south and presents us with a surprisingly unique mythic Egyptian setting.

To cut right to what matters most, this is a game where dudes riding scorpions fight dudes riding snakes. You might see your city’s pyramids captured by an army led by a mummy that teleported into your neighborhood and charged straight through your walls. It has a sort of Warrior Knights-derived combat system whereby you can win a battle but lose all of your soldiers trying to wipe out the other side. It’s a tremendously aggressive, fast-paced game where you’re never safe and every turn from the first one on to the dramatic finish will see the sands stained with blood. Sometimes mummy blood. I’ll just stop here for a moment and let you finish that online order that you should be placing right now.

Hopefully, you did actually go and buy this game because it is sensational, one of the best games of the year released to date and one of the most compellingly intricate yet simply executed designs on the market today. Although the Cyclades comparison has a certain utility, Kemet isn’t really quite like anything else out there although it falls into that sort of middleweight class of DoaM games that Nexus Ops pioneered. It’s intensely focused on conflict, but the strategic and development components of the design impart a fascinating but very accessible depth.

You’re an Egyptian god, and in order to exercise your dominion over the Nile delta area you’ve got to send your worshippers out to do your bidding. This usually means claiming temples, a chief source of victory points. Controlling one gives you a temporary VP that can be lost if someone else marches (or beams) in. Controlling two at the end of a turn gives you permanent VP. There are also a couple of special temples that let you sacrifice troops stationed there for permanent VPs or prayer points, the game’s currency used to buy soldiers, abilities, or to upgrade your city’s three pyramids. By the way- yes, I did mean to imply that this game features human sacrifice.

In Kemet’s parlance, pyramids are huge D4s in three different colors. Increasing the value of a pyramid gives you access to purchase the “technologies” of that level and color. So there’s a simple tech tree mechanic that provides a strong sense of Civilization-like advantage development. Deciding which economic, offensive, or defensive advantages you want is a major strategic element, usually resulting in an arms race between players. Since there’s no turtling possible and proximities are close, the drive to outperform your opponents is intense.

The game’s geography is almost negligible. Groups of soldiers can pay two prayer points to teleport from a home base pyramid to an obelisk, strategically placed within two space of each city and there’s one on each temple. No need to marshal soldiers and march them around the map, especially when you have special abilities or units that increase the basic one-territory movement limitation. Taking control of rival gods’ pyramids gives you victory points, as does increasing them to level 4. There’s also an incentive to attack cities because a pyramid seized by another player no longer provides its benefits to the original owner.

Combat is also intensely incentivized because winning a battle gives you permanent victory points. Units are cheap and expendable in the game, and it should be played as such. In battle, each player plays one of a fixed, common set of combat cards that provide a battle value, casualties, and a shield value. Totals include the battle value, number of units, and any bonuses from cards or abilities. Highest wins the fight, but then casualties are inflicted by comparing that number against shields. So the Pyrrhic victory is possible, as are strategic fights where the goal is simple to force a losing army to retreat out of a temple space without necessarily wiping them out. The combat cards are smartly balanced and offer a number of tactical outcomes in any given conflict. Don’t bemoan the lack of dice- this system is really cool.

Also really cool is the action selection mechanic. Each player’s card has a triangular diagram of available actions arranged in three tiers. At the end of the turn, you’ve got to have placed one of your five action selection markers in every tier. Moving, recruiting buying upgrades, praying for more prayer points, and upgrades are the choices and you only get to do one thing per activation. This keeps the game moving at a sometimes breakneck pace, with players sometimes making dramatic all-or-nothing plays to squeeze out three or four victory points (out of the eight required) in a single late-game turn to shut it down in their favor.

Every single turn is an all-out scrap to earn points with limited objectives but multiple ways to earn them. There is literally no point in waiting to attack. There are no strategic chokepoints, advantageous terrain, or really any value in not playing aggressively. The designers were very smart in creating systems and incentives that support this kind of play, and as a result the game feels tense and dramatic throughout its duration whether you’re playing a two player game or a five player one. The game scales exceptionally well and plays great with the entire range of configurations.

Vicious, beautiful, accessible, and compelling, Kemet is a grand slam. It’s a brilliant design that carries on the French tradition of out-Ameritrashing many beloved Ameritrash titles, cutting through the bullshit and offering a crowd-pleasing dose of thematic excitement and very direct conflict. It feels like both an instant classic and a completely out-of-nowhere design with more great ideas than anyone might have anticipated. 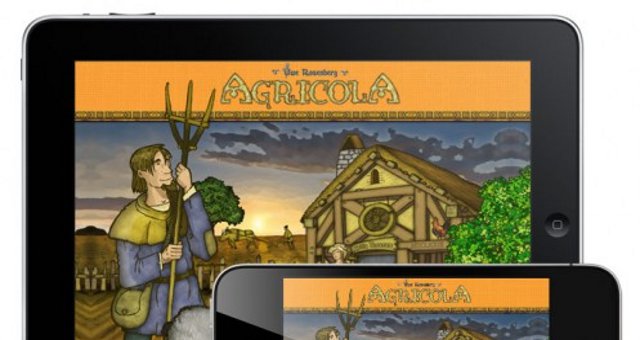