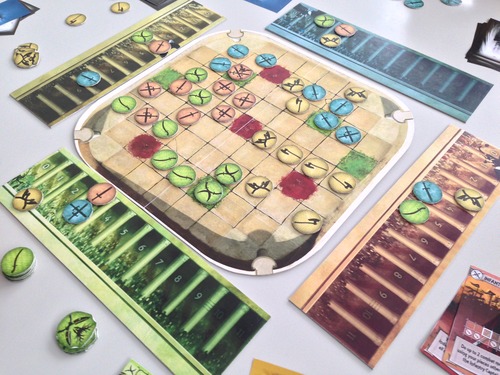 If I’m going to be charitable about Tash-Kalar: Arena of Ancients, I’ll state that it’s a highly experimental and sometimes oddly compelling design that feels like superstar designer Vlaada Chvatil test-driving some new concepts somewhat outside of his comfort zone. If I’m going to be a little more direct about it, I’m going to declare that Tash-Kalar is an awkward and frequently fumbling attempt at applying both conceptual and executive level theme to an abstract game that mechanically is no more specific than Checkers. If I’m going to be dead level honest about the new Czech Games Edition/Z-Man title, I’ll tell you straight up that it is agonizing to play. And not in a good way.

Mr. Chvatil, as his legion of acolytes will attest, doesn’t really design bad games. He tends to design games with differing levels of success. The modern classic Mage Knight would be at one extreme and this ill-advised foray into rather hardcore abstract gameplay would be at the other. The design goal was clearly to give an abstract design thematic meaning, but when the rulebook has to tell you to focus on the card’s picture to get its meaning across there’s a problem. That Tash-Kalar is such a spectacular failure is quite surprising, but there’s a part of me that admires him for trying something very different than repeating the successes of Mage Knight, Galaxy Trucker or his other more popular (and larger) designs.

The idea is that the longstanding rivalry between Mages that has raged through countless other games (Wiz-War, Summoner Wars, Mage Wars and so on) has been formalized into a kind of gladiatorial spectacle. Wizards meet in the arena and cast “Kalarite” stones, hoping to form particular patterns that will summon various warriors and creatures into battle from cards depicting the necessary arrangement of units. Each turn, a player gets to do two actions which usually are to place one or two “common” pieces or to identify a pattern of the correct pieces on the board and summon a creature (usually just another common piece) that has a special ability or movement effect.

Game situations or card effects can also cause pieces to upgrade from common to heroic to legendary (call it “kinging” if you must), which generally protects them from being removed from the board when a lower-ranked piece makes a combat move. There are also “Flares”, which are one of the most bold-faced rubber-banding elements I’ve seen in my entire life. The Flares have two this or that functions keyed to how many more pieces the opponent has on the board. So a card may allow a player that has five less commons on the board to place one or two or to make a special move. These get used quite a lot. I don’t think I’ve ever played an essentially abstract game where the board state changes so much every single turn, frustrating plans and causing players to have to reassess strategy almost every turn.

I think it may already be clear from the description where some of the problems with this game lie. Effectively, Tash-Kalar is closer to Go or Shogi than some of the other wizardly duel games out there. The constantly changing, fluid state of the board is really at odds with the kind of tactical placement game that it seems like it wants to be. Some of the summoning patterns are simple and fairly easy to pull off once the board begins to fill up, but others (including a random Legendary creature each player gets at the outset as part of their hand) are very difficult to cast- especially when pieces are coming and going from the board every turn.

Compounding the frustration is the fact that looking at the creature cards and trying to work out if there’s a pattern or potential pattern is absolutely not fun in any way. Turns drag to a halt as players stare at the board, then at cards, then back at the board, then at the cards turned sideways, and so on. Throughout my games- which all seemed excruciatingly long due to downtime- I kept thinking that an IOS version of the game that highlighted the cards you can play along with the patterns would at least make the game feel less mentally punishing.

But there’s still the issue that faction decks, random card draws, and vicious back-and-forth see-sawing do not sit well with fundamental abstract game concepts. It almost seems as if the pattern recognition element is a play for the cerebral aspects of the abstract genre, but Vlaada just can’t let go of more genre-oriented themes. I do actually think that the conceptual theme works here- casting stones into patterns to summon creatures is exactly what you do with the gameplay. But it just doesn’t work as a fantasy battle game because it’s too abstract and it doesn’t work as an abstract because it’s got too much fantasy battle game in it.

I’m also not comfortable with the oddly complicated rules. The “full rules” are on a single piece of paper, front and back, color-coded to incorporate all of the variant rules for whatever mode you’re playing. But the Guidebook (a common thing in a Chvatil game since they usually need some direct explanation outside of a usual rules presentation) is 12 pages long. It also includes some insightful nuggets like the mnemonic bit about the summoning patterns kind-of sort-of looking like the thing that you’re supposed to be summoning. I found myself constantly checking the rules and wondering if the game was really as complicated as it seemed to be or if I was just confusing myself.

The modes are an issue as well. The main game is called “High Form” and for good reason, because it’s really what the game seems to be designed for. It’s a two player contest that includes objective cards that award points for connecting sides of the board, having pieces on colored spaces, killing a certain number of units per turn and so forth. They can be pretty tough to accomplish, again due to the easy come, easy go nature of units. Deathmatch is a straight-up battle for points, and it’s fine for two -probably the most fun way to play since the wholesale slaughter of pieces is the objective. The multiplayer modes for three and four players, including a dreadful team variant, are completely worthless. Playing this game with three or four players placing and removing pieces is a dismal, supremely frustrating experience similar to bludgeoning yourself repeatedly on top of the head with a rubber mallet while someone reads you the myth of Sisyphus.

I do not like Tash-Kalar. I think it’s an almost total miss at a design level and its cause is not helped at all by it being dramatically under-produced and over-priced for a pile of cards and some practically artless counters that you put on a thin, cardstock board. Yet I think this game will have its defenders, mostly human computers who actually like to overthink moves and enjoy the complicated pattern recognition element of the game. But even for that crowd, I don’t think the chaos inherent in the design is going to go over too well.