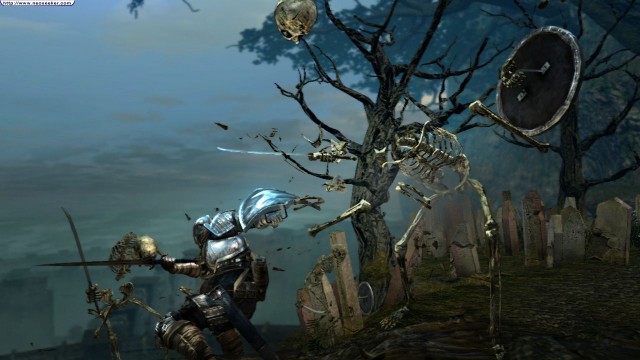 This isn’t really a news story because it ended up being a non story. Apparently Namco listed that the game would require a microphone for voice chat. The specs flat out said:

So Eurogamer ran the story (perhaps maybe a phone call next time before going to print rather than after?) assuming it was true when in fact Namco just listed it incorrectly, which yet again caused the PC gamer crowd to get all twisted up and mad. If you don’t know, general voice/partychat in Dark Souls is disabled on the consoles. This is a solo game, even when playing with someone during a boss fight. It’s kind of a big part of the design so adding built in and required voice chat would be…bizarre.

Then again so is the reaction from some PC gamers to the entire Prepare to Die edition.

*PC gamers read about this awesome game on the Xbox 360/PS3 called Dark Souls. It’s a wonderful game. Console only.
*Phone calls are made, petitions are started, Namco and From Software are surprised by the outpouring from fans who want to play a PC version of their beloved hardcore RPG.
*The publisher decides to release a PC version and will also include a slew of new goodies — areas, bosses, new PvP etc. Woo.
*It’s reported that the game is basically a port and will not be optimized for the PC and that From Software had a hell of a time making it work. (Now, keep in mind From didn’t say that it didn’t get it to work, just that it was a bitch to do.) I saw it at E3, it looked great, ran fine, and I was floored when I read about the gnashing of teeth after the show was over.
*Some PC gamers are mad.

Here’s a snippet of what I mean, taken from the Eurogamer comment section (and there are a LOT like this in various threads)

What was the point of that whole petition we all signed if we gonna land up with a game that is sub par?

No optimisation? Ok my dual core is going to be 100% all the time, nice job Namco Bandai

All the joy from the PC version announcement has completely dissipated. This is really sad.

I’ll say this: if Dark Souls on the PC has the exact same framerate as the Xbox 360 version, even the choppy bits in Blighttown, but adds solid new content and allows those who play games exclusively on the PC to experience this wonderful game even if the framerate dips below 30FPS from time to time, then PC games should thank Namco and From Software from the bottom of their hearts and be happy that there is a PC version to play at all. There wasn’t going to be.

(Oh, but if the framerates are worse than the 360 then I reserve the right to retract my comments and agree with them.)

Lastly, there is an interview over at IFC (Yeah, IFC) with Nobu Taguchi of Bandai who discusses some of the concerns as well as some of the new goodies, including the new PvP arena.

“In order to maintain the authenticity of what the consoles already have, we basically did make a direct port plus a few tweaks to kind of make things a little bit better. I won’t say it’s moving at 60 frames per second or anything, but it moves to the extent that it satisfies a lot of people’s concerns that they had with it.”