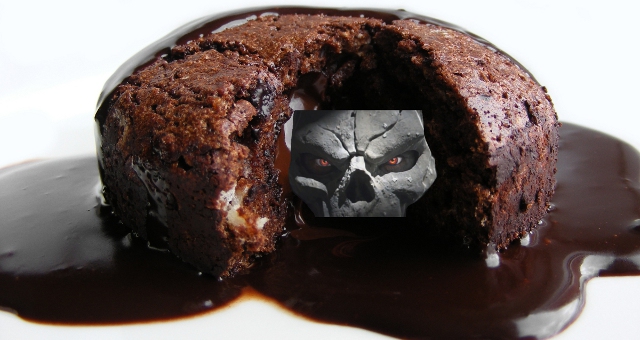 Man, there has been lots and lots of talk about death around these parts lately. I’ve been getting my fill of Darksiders II, featuring everyone’s favorite horseman, Death. So there’s that. Also, today marks the PC release of Dark Souls: Prepare to Die Edition. One game features Death as the main character, the other, features, uh, Death as the main character. No matter how you cut it, that’s a whole lot of dying.

So, when the time came to dust off ye olde Don’t Shoot the Food, I thought about death and dying and one thing and one thing only popped into my head: morbid obesity. Whoa! That’s not right. Let me try that again…ok, here we go: chocolate! Yes, that’s right, death by chocolate, to be specific.

Now, Death By Chocolate can be any dessert that is sufficiently chocolatey. It can also be any homicide or accidental death that is sufficiently chocolately, but we won’t worry about that in this post. You could make a cake or brownies or whatever you want, load it up with chocolate, probably several different kinds, and call it Death By Chocolate. That being the case, there is a somewhat “traditional”, if you can call it that, form of Death By Chocolate that is basically a trifle of whipped cream, chocolate brownies and chocolate mousse/pudding. Crumble a toffee chocolate bar atop your creation and the demise of all that consume it is assured.

Now, I could give you detailed recipes for chocolate brownies and chocolate pudding, but here’s what I’d suggest: go to the store, buy a box of whatever brownie mix catches your eye and whatever pudding mix catches your eye. Go home, make them and you’re half way there. Are there better homemade options? Sure there are, but if you know that already, you probably have a brownie/pudding recipe that turns your crank. As I am loathe to get between a chef and their crank, I’ll leave it to you to make your brownies and pudding however you see fit.

Ingredients
1. 2 cups heavy cream
2. 1 tsp vanilla extract (you can also use almond extract, but almond extract is straight up nasty)
3. 1/4 cup confectioner’s sugar
4. 1 13 x 9 pan of room temperature brownies of your choosing, the chocolatier the better
5. 3 cups of your favorite pudding recipe, again, the chocolatier the better (you can go higher than 3 cups, just don’t go less than that. Don’t be skimpin’ on the pudding, now).
6. 5 1.4 oz chocolate covered toffee bars (Heath bars are the best. Of this, you can be certain.)

Cooking Steps
1. Whip the cream into soft peaks and then whip the vanilla extract and confectioner’s sugar into the peaks. You want the peaks to be stiff but not grainy. Don’t over beat the cream or your whipped cream will be mad lumpy, yo.
2. In a glass trifle bowl, add a layer of crumbled brownies (half the pan), a layer of half of the pudding, 1 1/2 of the toffee bars, crumbled and a layer of half of the whipped cream.
3. Repeat the layers as in step two and finish off the layers with the remaining two toffee bars, all crumbled up.

If you want, you can also make individual layered servings in small trifle bowls or parfait glasses, but who needs that much work? If your guests demand their own Death By Chocolate, stab them with a sharpened Hershey bar and then move onto dessert.