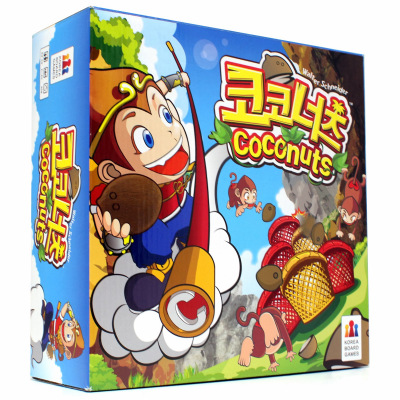 One of the things that having small children makes you realize is that simple games where the fun is easy to get to without a bunch of hobby-work. You start to value games that don’t require a significant investment of time or effort beyond the reach of your young ones. My children are four and a half and two weeks shy of three so they are not exactly anywhere in age range of playing Robinson Crusoe or Mage Knight with dad. I try to find them games that I think will immediately grab them, entertain them for 15 to 20 minutes, and leave us all smiling. But I also want games that I can appreciate as an adult game player. Dexterity games- at least some of the simpler, action-oriented ones are often a good common ground. Recently I picked up a couple of Korean action titles published in the US by Mayday Games, best known for producing card sleeves in non-standard sizes, questionable Kickstarters and Crokinole boards of reportedly table-damaging low quality.

Click Clack Woodsman has been around for a couple of years under a couple of different names and in a few different boxes. The latest edition comes in a pretty spartan package that feels cheap, but it’s a low-cost ($14 from the discounters) crowd-pleaser that offers a fun wood-choppin’ experience both kids and adults can enjoy. If you can understand whacking at a plastic tree with a toy axe, you can play Click Clack Woodsman.

The title of course- regardless of whatever version- is an onomonatopeia of what playing this game sounds like. The tree is composed of a base trunk and nine light brown “core” pieces stacked on top of it. Each has four slots, into which you stick these darker brown bark pieces that effectively encase each slice of the tree. You get two strikes on the tree, and you want to hit a slice in such a way that it slides slightly off an edge, enough for one or more bark pieces to drop down off the tree. You collect these for a point a piece, but if you knock off one of the core pieces by hitting the tree too hard, you’re hit with a whopping -5 point penalty. It’s subtly smart piece of design that each slice-four bark pieces and the core- is actually worth -1 point in aggregate. 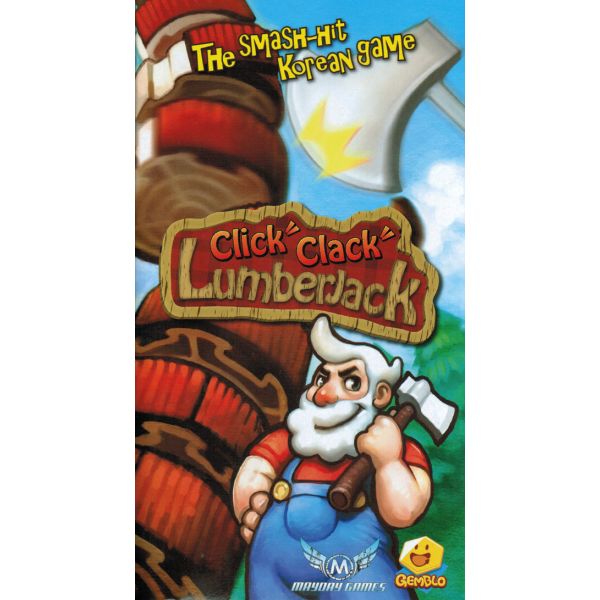 That’s really it, the only other rule is optional- you can put four bug stickers on as many pieces of bark and whoever knocks them off gets an extra turn and an extra point. My kids both got it immediately; literally as soon as I had the tree set up and hit it once to show them what to do. No explanation was really needed, but they didn’t really understand that the core pieces were a penalty. I sort of built a narrative around the game, that we were actually looking for the bugs under the bark and but we didn’t want to hurt the tree and that sold the concept to them.

They also had a little difficulty with figuring out how to hit the tree with the right force. So of course, we had a few turns where the whole tree was left in shambles and others where nothing was moved at all. River does this thing where he tries to double-tap the tree to get a third strike in before he passes the axe, I just let him do it. It ain’t that serious.

So with kids, it’s quite literally a hit. They’ve asked to play it every day. I played it with some adults as well, and like all of the best dexterity games it was met with a lighthearted “WTF is this” followed by laughs and “let’s play again!” From a wizened, veteran gamer perspective, I think it’s really a smart piece of product design. The first time I hit the tree and watched the slice slide and drop the bark I just thought it was super neat.

The other title is Coconuts, and the grinning plastic monkeys should tell you right away that you’re a long way from Caylus, Dorothy. Effectively, Coconuts is kind of a cross between a catapult-based carnival shooting game and Beer Pong. But for kids.

You get eight coconuts, a play mat showing three tree trunks and a foul line and one of the monkeys. There is an array of plastic cups between the players. You put the coconut in the monkey’s hands, pull down, and he flings it backwards over his head. If it lands in a cup, you take the cup and put it on one of your tree trunks. The goal is to build a pyramid of six cups.

Of course this is not as easy as it sounds.

Aiming, applying the right pressure and so forth are obviously core skills. But even the best shot will often bounce right out of the cup because- rather brilliantly- the coconuts are irregularly shaped and made of a bouncy rubber. And there is also a nasty streak in the design, because if you land a coconut in one of the cups stacked up by another player you get to take it. There are also red cups that give you an extra shot if you take them and a small stack of fun (and totally optional) cards that let you do things like block someone from getting a cup if you play the card and call it before the shot. I love that the “Magic Wind” card, which lets you blow to try to divert an opponent’s coconut, has a note in the rules that recommends that you use a newspaper or fan for best results.

This game is a blast. It’s totally stupid, obnoxious and it only takes about one minute after setting it up to get to the fun. My kids just lit up the first time one of them got a coconut into a cup. Once they realized that they could steal cups they started deliberately aiming for each other’s pyramids. River did notably better at the game than Scarlett did, I have to help her control her shots and line up the monkey but I think after another few games she’ll be on her own. We don’t use the cards yet.

Adults will find that the cards add more fun and silly interactions without increasing rules or changing the simple carnival game style of play. I’ve been playing with three during kid time, but an all-adults game with four players was just as much fun and I actually wouldn’t mind playing with more using two sets. It’s another one where everyone looks kind of incredulously at the box and then wants to play it five times in a row.

So both of these games were big hits both with my kids and my friends so I think they were a good investment even though both were quite inexpensive. It’s kind of shame that both of these are not available in the US at mass market outlets. For all of the hoo-ha about games like Settlers, Ticket to Ride and Carcassonne making inroads into the larger culture, it’s these kinds of games that have a truly broad accessibility that could reach far outside of the hobby games ghetto and onto the tables of any family.