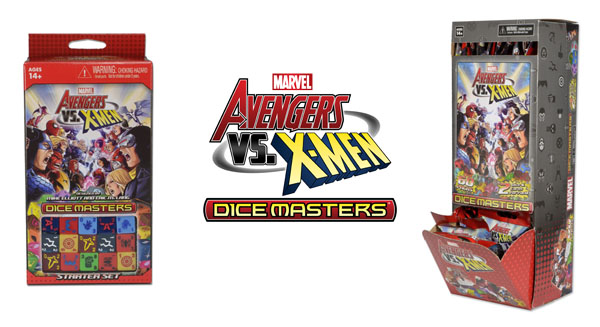 Wizkids’ new Marvel Dice Masters: Avengers versus X-men is a sensation. The starter sets are sold out everywhere because demand simply outstripped supply. There is already a healthy aftermarket with players and collectors shelling out $40 or more for “super rare” cards. Tournaments and organized play supported by Wizkids are waiting in the wings and the buzz over the game is overwhelmingly positive. It looks like it’s primed to be one of the most significant hobby game releases of 2014. Building on their design work with Quarriors and the Lord of the Rings “dicebuilding” game, Mike Elliot and Eric Lang have produced a hybrid that exists somewhere at the crossroads of those games, Dominion and Magic: the Gathering. All coated with a billion dollar Marvel Comics paint job.

Up front, the game is good. It’s a solid design that makes Quarriors look like it was the underdeveloped Kickstarter version of the idea Mr. Elliot and Mr. Lang had in mind. Conceptually it’s very similar but it’s a head-to-head game with players attacking each other to reduce life points rather than trying to score creature dice. Instead of players purchasing dice from a mutual tableaux with which to fill their dice bags, they bring their own cards and dice depicting Marvel heroes and villains to the table that form their roster along with two basic action cards that either player may buy. Each card may have three to five dice on it, and part of the construction process is determining how many of the 20 total dice allowed you want to put on each of your cards.

Each card has a different cost and special abilities that correspond to its dice. Starting with a pool of eight “sidekick” dice that provide either one of four resource types or a weak (but free) 1/1 unit. The idea is to use the resources those generate to buy the more powerful character dice. As those get cycled into the dice bag, they may produce resources themselves or be “fielded” if you roll their character icon face to attack or block the other player. Combat is very Magic influenced- a simple comparison of attack and defense numbers between dice, KO’d dice are shifted to a “roll again on your next turn” status. If your attacking dice aren’t blocked and do damage to the other player, they are moved to a used pile and must wait to cycle back into the bag. Of course, there are plenty of abilities that break the rules, provide benefits and alter process.

Strategically, there is actually quite a lot to consider and this complexity extends well beyond rather to bring Spider-Man or Deadpool to combat Magneto and the Green Goblin. After you roll, you have to choose which if any dice you want to roll again for keeps. You might want to field all the sidekicks you rolled to have some blockers or to ding your opponent if he doesn’t have anything to stop you. Or you may want to chance a re-roll to try to get resources to buy more expensive dice. A character die might have given you two resources, but you might really want to roll again to get a character face and take advantage of a “when fielded” result or try again for a special “boost” action if you get the side with an asterisk. And keeping resources while your opponent acts might be necessary to activate certain abilities or to use a global effect if there is one present in the card tableaux.

The global effects are one of the areas where the rough edges of the design start to show, and they feel like an unnecessary complication to what should be a very simple, quick-playing game. Some cards have these, and they are abilities that either player can pay for to use. So I might have a card that lets you pay two resources to do one damage to a die. The cards you bring can actually be a minor liability. The problem is that if you’ve got 20 cards on the table between two players and there are ten global abilities, it can be tricky to keep track of them. It’s just something else to keep track of. There is no hidden information in this game, so it also tends to result in a bit of analysis paralysis when players are bogged down in “if I do this, and then you do that…” dickering.

The lack of hidden information is also something of a problem because there never really is any kind of surprise in the game. There’s no sudden game-changing counter or a scramble to adjust a strategy due to an unexpected challenge. It’s all very transparent, and it never really seems very exciting to roll an extra resource or to realize that you can afford one of your 6-cost characters. Everything is right up front, apart from what dice you draw on a turn.

The pacing seems to follow a particular curve, at least in the games I’ve played. There tends to be a buildup period, where players are either focusing on getting inexpensive characters into their pools or buying basic actions to increase their production potential while also planning on leveraging those cards’ abilities. By the third turn, character dice are likely to be in the game after the initial eight die seed is recycled into the bag. Between that third turn and what I would consider to be the endgame stage, it feels like one player almost always starts to drop off while scrambling to get units to the field to stem the flow of blood, so to speak.

It’s early in the game’s lifespan and it’s hard to really say that this is how it will always be despite increasing skill levels, team builds and the overall volatility of a collectible game but so far I’ve been disappointed that steamroller victories have been so common. At higher levels of play, once players become more acclimated to its intricacies and better teambuilding emerges, this may prove to be just a growing pain.

For now, I have some chin-scratching issues with the design, no doubt. But there are also some really smart design choices that keep the flow of the game compelling, provided you’re not on the ropes for over half of the 20-25 minutes it takes to play a match.. I love how the concept of “culling” dice has been replaced by simply forcing a player to put a dice that has “scored” (i.e. caused direct damage to a player) into the used pile. So you can’t sit there battering your opponent with Hulk every turn while he struggles to mount a defense with weaker characters. I like that dice that are KO’d in combat or due to effects are put into a status where they are re-rolled on your next turn along with your standard four die pull from the bag. This gives you an incentive to actually use your dice and be aggressive, and it also allows you to adjust your strategy to get defenders back into the mix for more resources. You have to get these rerolls if you’re ever going to put your heavy hitters like Colossus into play.

I’m giving MDMAVX the nod for now because I do really like the game, but more than the design I really like the product. I think Wizkids made a very ballsy move by packaging this game as a very much not-in-vogue collectible game, but even moreso for pricing it on par with the App Store. Boosters are less than a dollar a piece, and if you buy a “gravity feed” display box they’re like 70 cents apiece. Each pack contains two cards (with four degrees of rarity) and two dice that match those characters. The starter, which is actually quite generous and contains some very useful cards, is only $15- if you can find one anywhere selling it for retail. Sure, you might wind up spending $300 trying to get the complete set of Green Goblin, Mr. Fantastic, Wolverine and Black Widow super rares, but the whales don’t matter here. What matters is that a kid can walk into Target and spend less than a dollar to buy a hobby game product.

And there is huge mainstream appeal here, despite the surprising complexity of the game. Beyond fussing over dice in various states and complicated timing issues, the Avengers and the X-Men are household names and they are headlining a cool-looking game (with better illustrations than Legendary, by the way). The dice are really neat- the icons are immediately identifiable and the color schemes match up with the characters. It’s a fun product from opening the inexpensive booster packs to putting together a team of favorite characters to figuring out how to put down your buddies. I think this could really catch on with kids, at least once the gamers and speculators have gotten done picking over everything.