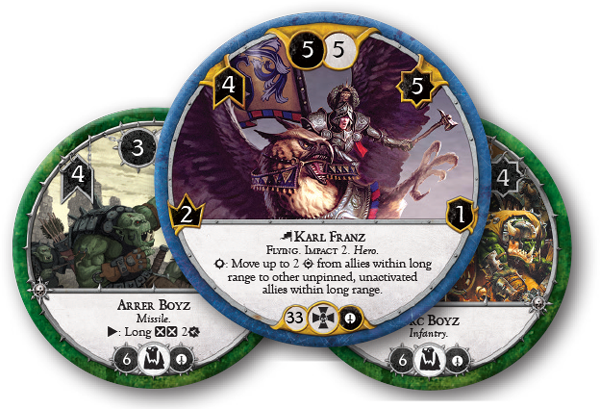 My first reaction to Fantasy Flight Games’ Warhammer: Diskwars was “they’re bringing back Diskwars? What’s next, Vortex?” My second reaction, after reading the advance post of the rules was “hey, this actually looks pretty fun.” My third reaction after playing it was “holy shit, I’ve been waiting for this game my entire gaming life.”

Pause for confessional. Even though I’ve gone through spells over the years, I’m not much of a traditional miniatures gamer these days. I do not like assembling, painting and basing figures. I do not like building terrain. I’m not much of a craftsman. And aside from Warmachine, I’ve never found a miniatures system that had rules that I actually like. Sure- the lore of some of these games is awesome. Games Workshop’s Warhammer lines in particular. And I do generally like the concepts of miniatures wargaming, so it’s always been something of a quandary for me

So I’m usually first in line when an no-paint/no-build “alternative” miniatures game appears on store shelves, and to this end I ordered Warhammer: Diskwars the day it was made available at my favorite online retailer. Cutting to what matters most, this game is one of the best of these kinds of games to date, it blows away the competition because it bridges that gap between the awesome allure of the Games Workshop world and the low commitment demanded by casual tabletoppers such as myself.

But really, I had played Diskwars before it had the taint of Chaos. The original Tom Jolly (that’s Mr. Wiz-War to you) had a generic fantasy theme and I had a couple of packs- it was originally a collectible game. The Star Trek: Red Alert version was much better, an ultra- nerdy game that suspiciously looked like pogs for Trekkers. The high level concept is that Diskwars is a miniatures game but with cardboard discs instead of figures. All stats and abilities are printed right there on the discs- no need to reference a codex or rulebook. Put the tape measure back in the tool box where it belongs. You move these armies by flipping them end over end a number of times equal to a movement rating.

The Warhammer Diskwars core box comes packed with an unusually generous assortment of these discs representing Empire, Ork, Chaos and High Elf units. You get enough to field three regiments for each faction and a two regiment game is a de facto standard for a 45-60 minute, five round game. Adding another core box, of course, drastically increases your ability to customize army lists and gives you much more versatility. With that said, this is one of the most “complete” core sets I’ve ever seen and if the game never saw another expansion I think it would still represent one of the best values in hobby gaming today with a $28 street price. For less than the cost of a Warhammer Fantasy Battles miniatures unit, you also get a couple of 2D terrain pieces, deployment zone cards, dice (used only for ranged attacks), administrative tokens and a small pile of Command cards that drive the flow of the game. All you need other than the box is a $2.99 piece of 3”x3” green felt from the craft store.

Rules are simple but expect to lean on the rulebook for a couple of games. Setup is easy. Once armies are built (a simple point-based process, as expected), players draw a card that provides an overall condition for the battle as well as cards that define goals such as earning VPs for defeating enemy heroes or having units overlapping the other side of the playfield by the end of the game. Troops are deployed in deployment zones, which may provide cover or other special abilities. Terrain is placed for strategic purposes by both sides. It’s your choice rather to place that lake in the middle of the enemy’s deployment lane to slow their advance or to put it where it can provide some defense for your Bolt Thrower.

Then it’s on. Each player selects an Command card which operates on a rock-paper-scissors-dynamite scheme. These define the number of units you can activate that turn and any special advantages. Discs start flipping into place. Ranged units get to take their shots, rolling dice to see if there’s a hit, a critical, a scatter or the dreaded Mark of Chaos. Once every unit has been activated- or is pinned by another unit, initiating melee-all engaged units exchange blows in piles of engaged discs called “scrums”.

The catch is that units need to take enough damage in a single round to receive a wound because all hits come off at the end of it. So coordinating attacks is essential to eliminate units before the reset. Inevitably, an assault turns into a full-on fracas as defending units pile on to protect whoever’s on the bottom of the pile. Melee can be somewhat complicated when several units are involved in a scrum, but a simple top-down resolution order and simple comparatives between attack or counter attack values and defense numbers keeps things from bogging down.

There’s lots of great detail. Firing a Helblaster cannon into a scrum might result in it accidentally hitting your own units if it scatters. Or you might get a result that causes the damn thing to malfunction, flipping over and killing the Talabheim Greatswords unit you have protecting its flank. Some units do damage as soon as they pin another. Others fly, avoiding terrain penalties. Magic users are a great way to get those guaranteed extra two hits or so that you need to put an enemy hero down- provided that they’re not magic resistant. There are units that can scout before the game actually begins and others that can deploy from any side of the playfield to flank the enemy. Every unit plays differently and has unique strengths and weaknesses. And above it all- most importantly- it totally feels like Warhammer even though diehard WHFB players will likely lament the distinct lack of wheeling formations.

Bottom line is that this game is fun. The rules complexity is just right, avoiding the sacrifice of either accessibility or depth. The units are exciting and offer lots of tactical possibilities within regimental builds. It’s an effortless design that has clearly been heavily analyzed, redeveloped and sharply refined not only to smooth out the Diskwars system (no more dropping ranged attack counters from above the table, for example) but also to make it work for Warhammer. This is the best game that Fantasy Flight has released since X-Wing. Go ahead and sign me up for every expansion.