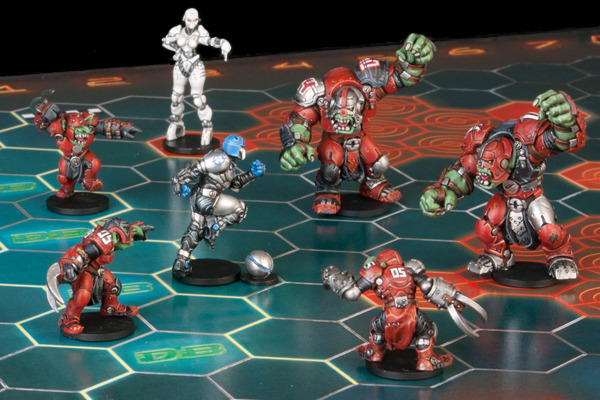 One of my favorite games, if not my #1 favorite game, is Blood Bowl. I adore almost everything about it. Problem is, I never get to play it much these days. Funny thing is I really don’t know why — I play a lot of boardgames but BB has remained packed up for quite some time now. I blame Cyanide. (Hey why not?)

A: Is at its best when playing long term in tourney or league play
B: Is a bit antiquated in its rules
C: Takes a while to play

Don’t get me wrong, I still love the old game, but there’s nothing wrong with a new spin and perhaps a little innovation.

The Kickstarter has raised $160,000 to date which has unlocked a slew of “stretch goals” and after reading everything I can about the game it looks like it could be a nice successor to Blood Bowl. Blood Bowl is such an established franchise filled with reams and reams of house rules, living rules, fan made teams, etc. that Dreadball will be behind that curve at first. I think the game, even with all the goals, will carry four teams to start.

But it looks modern, and sounds like it plays fast and fun without much downtime. I’m pledging.