When Brett Murrell’s Duel of Ages appeared back in 2003, it was sort of a strange entity. Its marketing materials and website conveyed an ambitious- and seemingly venture capital backed- line of products that were very much not in step with the current design trends at the time. Puerto Rico was still considered one of the top games in the hobby and the first “hybrid” American games with Eurogame influences such as Christian Petersen’s A Game of Thrones and Glenn Drover’s Age of Mythology were starting to appear. Heroscape and War of the Ring were right around the corner.

With this context in mind, I have to admit that when I first played Duel of Ages ten years ago I didn’t like it very much. It felt old fashioned and not in a good way. I wasn’t really sold on the concept of bringing together characters from four different eras and kitting them out with mismatched gear. It was a highly idiosyncratic game, with unusual sawblade-shaped modular map tiles (“platters”) that were notorious for warping. I felt like the game was clunky, clumsy, and retrogressive. Yet it persevered, becoming something of a cult classic among its fans that just couldn’t get enough of putting William Wallace on a bicycle, armed with a plasma rifle and with a grenade-hurling wizard and an angry bear in hot pursuit.

Now it’s 2013 and a lot has changed not only in game design concepts, how games are marketed, and what players expect but also in how I am approaching the newly released Duel of Ages II. Returning to the game for a decade-late second chance has been revelatory- this game, in many ways, is the one that I wish that I had been playing for the past ten years while in search of great narratives, player agency, and endless possibilities. It is a dramatically unbalanced, open-ended, volatile, combat game that offers a completely player-owned and crafted narrative. It is a game that feels like some of the better elements of classics like Gunslinger, Wiz-War, Talisman, Squad Leader, and Cosmic Encounter but not nearly as cumbersome as a mash-up of those things should be by rights. It is a game that is often amazing, frequently ridiculous, sometimes infuriating, and never quite like anything else you have on your shelf.

There’s a lot of fluff involving the “Worldspanner” concept, including short stories on the back of each of the 144 or so character cards in the game. But all you really need to know is that a stupendous range of personalities ranging from superheroes to historical figures to killer robots to average Joes from Ancient, Colonial, Modern, and Future eras are sent to duke it out across hex-based map platters. Each has a special ability or two and a range of stats that are generally used in comparative resolutions involving a card flip to determine a degree of success or failure. There are hundreds and hundreds of cards representing weapons, items, pets, armor, vehicles and other equipment that characters can pick up and hurt others with. You don’t just pick up a sword, you pick up a specific kind of sword. The variety- and specificity- is kind of astonishing. 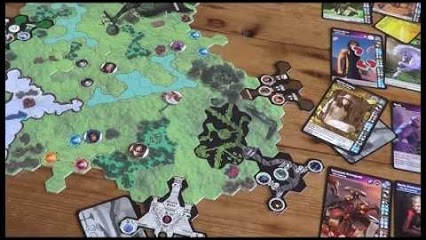 The focus of the game is maneuver and combat, complete with a full range of simple wargame-descended rules for terrain, opportunity fire, and line-of-sight. But there are also adventure game qualities, as characters can descend into “labyrinths” corresponding to each era that link the map platters together for all kinds of crazy challenges that yield rewards including item cards and advancement toward achieving team-wide bonuses. You can send a team over to the enemy base to infiltrate it and either wreck it or break some of your captured teammates out of prison. There’s a sort of goddess-thing that oversees the events of the game and you can go take her gifts (such as a side of bacon, the Mona Lisa, and a Valentine) to win her favor.

As for the goal, it’s really kind of up to the players. You can play for points, earning them for kills or captures as well as labyrinth achievements. You can choose to do an all-in deathmatch to the last man. Or you can play a two hour game or one that runs 12 rounds. Three map platters, five map platters, six characters to a side, two players, sixteen players, 20 characters total from a completely random draft, all characters with beards, only monsters and ancient items- the choice is completely up to you.

And that is just the beginning of where the player’s ownership of the DOAII experience begins. The rules are definitely a few steps up from something like Heroscape so there is some complexity (particularly when you’re figuring in various effects, bonuses, and other factors) but it’s all very systemic and much smoother-running than the original version of the game. I love that a single card flip from the Challenge deck gives you a full CRT’s worth of results and there’s always a chance that a no-hope melee contest between a fairy and a prizefighter could end in an “Amaze” result for the former and a shameful beatdown for the latter. It’s up to you to tell the story of why that happens.

The rules do not describe a story, this is not a narrative explained by process or resources. The flavor text on the adventures the characters face is spare, so you get to fill in the blanks as to why Stephen Decatur wound up holding off an Orcish siege or how Clara Barton went into the future and was on an intergalactic dating show. As players get involved with elaborating on events or trying to parse some of the absurd tactical situations that might occur the narrative is organically grown into the metagame from what develops on the board.

It helps that the game is highly detailed, but not in a way that interferes with the rock-solid core gameplay. There’s so much that can happen and so many different tactical situations. There are wolves you can send out to track down enemies, sentinels you can post to guard territories, and character-specific specializations for different equipment types to gain bonuses if you luck up and find (or trade) for the right gun or knife. Horses to ride, secret missions to undertake, henchmen to martial…when you play the full game with the Master Set’s increased range of- well, everything- the potential variety is insane.

But that does mean that some games play out better than others, and you’ve got to be willing to roll with that. For best results, play with people that care more about fun than winning or rigid mechanics. If nobody is having fun with their characters and equipment just reboot it. Own the experience- if you don’t like the labyrinths, use the included encounter chits instead. If you feel like characters should start with at least one weapon matching their specializations, do it. You can’t break this game by seasoning to taste, and its flexibility effectively bridges the gap between more closed system board games and the more customizable elements of tabletop miniatures or even collectible card games.

Like those types of games, which tend to reward commitment, it’s also important to note that DOAII is not a game to play two or three times and then put on the shelf. It’s simply not designed for you to dip your toes in, see what the mechanics do, and then kindly excuse itself for you to move on to the next week’s new hotness. It invites you back not to experience the strategic possibilities within its process, but to see what kind of story you can tell the next time. It somehow manages to capture a very modular, customizable, and open concept within the confines of a board game format. Thinking back to my first two or three games back in ’03, I wonder if the problem I had with it was that I just didn’t play it enough to get to the good stuff. I’ve now played DOAII than I have more than any other game this year and I’m ready for more.

One of the squishier, more subjective things that keep me coming back to DOAII is that it comes across as something very personal, very much a product of an author. But that author has put a really uncommon level of trust in the players to finish his creation by playing the game and I find that terrifically compelling. I get a sense that this game, for all of its scope and range, is very personal and speaks to Mr. Murrell’s interests, influences, and passions. It’s a subtle aura about the game juxtaposing ambition and player agency with intimacy that serves to set it apart from almost anything else on the market right now.

While we’re in squishy territory, I think anyone will appreciate that there is an overriding, welcoming sense of play in this game that is quite arresting. There’s something in this game about raiding bases, getting cool items, and running a cowboy through the woods to get into a sword fight with a science fiction cat-man that reminds me of playing army or other make-believe games when I was a kid- you can even get shot at and then say “shields!”, revealing a shield card. It feels youthful, enthusiastic, and liberating. After some time spent with DOAII, you might find yourself wondering why you’re not feeling this element of pure play as much in other games.