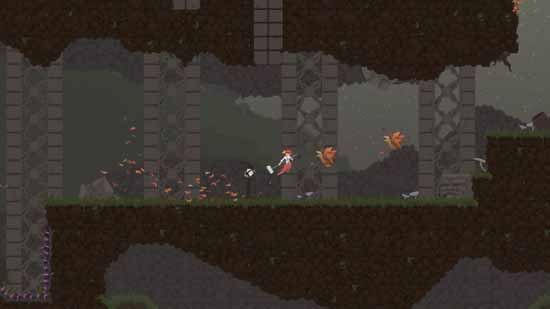 I loaded Dustforce expecting a quirky and lighthearted platformer starring a nimble quartet of obsessively tidy janitors. Within 15 minutes, my ego had been voraciously manhandled and whipped into a delightfully frothy topping fit for Beelzebub’s Sunday pudding.

Playing Super Meat Boy, Trials HD, and Mirror’s Edge are still some of my favorite ways to spend an afternoon, so you know that I am no stranger to challenging games that require vast amounts of repetition. This side of a 1980s arcade, Dustforce is one of the most relentlessly difficult games I have played. It’s not unfair by any means, but the absolute perfection it demands…no, requires, is astounding. 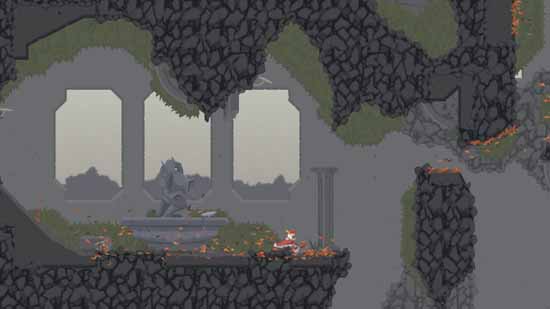 The term, “platformer,” is slightly misleading, as you spend much of your time sliding along walls and ceilings to clean every nook and cranny of the world with a broom and ninja-like flair. At its simplest, Dustforce recalls the heyday of Sonic the Hedgehog in the 1990s. At its most sadistic (ie most of the time), you leap, dash, and slide through narrow corridors of airborne spikes with nary a centimeter allowed for error. Remember The Guy’s level in Super Meat Boy? Yeah, it’s like that.

The controls are incredibly responsive, but not lenient by any means. You can play with the keyboard or an analog stick, although Dustforce is best experienced with a ‘good’ d-pad (ie not the Xbox 360 controller). Most surprising is how complex the maneuvers can be, with hidden ways to perform seemingly impossible feats. Though difficult to describe, it’s the type of control-tweaking usually reserved for the fighting genre, in which players have intensely studied minute variations in animations to develop techniques such as plinking and frame traps. 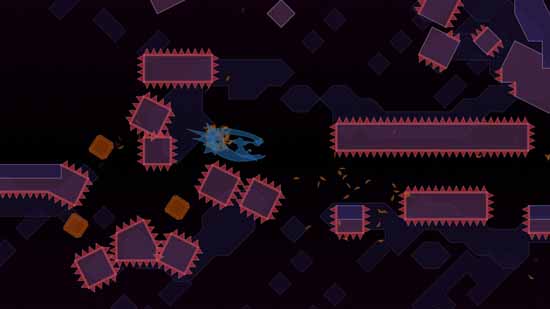 The fighting game mentality of hidden strategies extends to the characters as well. Each has unique traits, although the game never mentions them. For that, you have to do your research on the forums. It’s a neat idea that encourages players to identify with a character, instead of choosing solely for abilities. But, it’s frustrating to discover that a character’s subtle ability, like a slightly quicker fall-speed, could have saved two hours or more of frustration.

I haven’t beaten Dustforce, and most likely never will. It’s an issue of incentive. There are 16 of 49 stages initially available, and more are unlocked through perfect runs – cleaning every speck of debris quickly and without taking a hit. There are no stories or items to collect, and close counts for squat. Dustforce’s system isn’t ‘wrong,’ but after spending 45 minutes to nail a stage, I’d like more than a “Thanks for playing. Try the next stage.” Actually, the game doesn’t even give you that much. 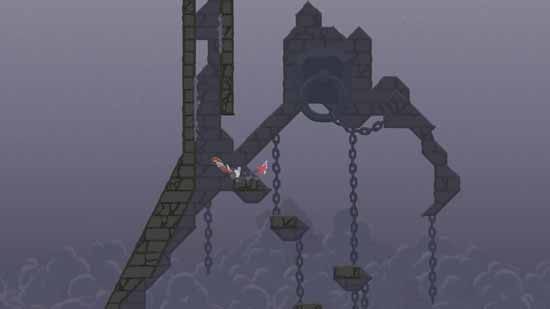 The time trials of Mirror’s Edge (my favorite part of the game) follow a similar path of progression. The only rewards for good performance are more stages to complete. But, the real challenge in Mirror’s Edge is not only perfecting, but rather, exploring each stage to find ‘your’ best path. In contrast, Dustforce’s stages have, almost exclusively, precisely predetermined paths. At the core, it’s a test of how accurately you can input a series of commands – like data-entry with a pretty interface.

Dustforce is an attractive game with simple, but delightfully illustrated characters and worlds. More than that, the soundtrack from Lifeformed has quickly become a favorite album. These factors alone make it difficult to turn my back, but try as I might, I can’t get into Dustforce’s extreme levels of repetition.