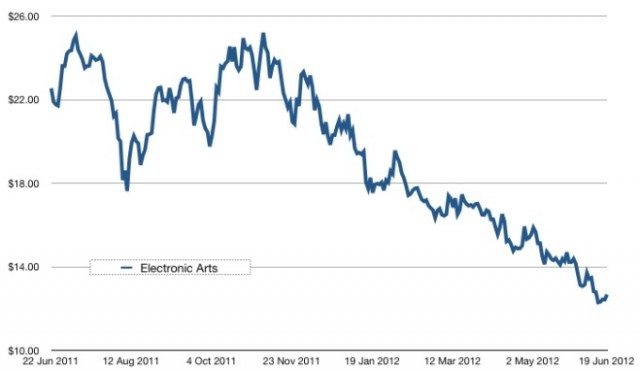 We don’t do a lot of money/business talk around these parts but this story is worth mentioning because it could foreshadow what the future of this industry might look like down the road. The landscape is changing. Fast.

If you are in the stock market and you have shares of many of the big name game publishers you are likely none too pleased with the current trend — in that you are losing a lot of money.

The big stories in gaming and the market are currently revolving around THQ and Zynga and to some extent Facebook. However, there is a trend at work which isn’t being talked about but this piece over at GIBiz paints a rather murky picture for companies like Electronic Arts and Take-Two. In fact, EA and Take-Two’s stock has fallen faster than the yodeler on the Price is Right.

Electronic Arts’ stock has lost almost 40 per cent of its value since the start of this calendar year – and in fact, since the middle of last holiday season (around November 2011) the company’s stock has been in a steady decline which has now wiped close to 50 per cent off EA’s valuation.

That’s not only bad that’s dangerously bad. This is why:

This fluctuation represents billions of dollars moving out of the company’s valuation, and the fact that it’s a trend which has persisted for six months suggests that investors are genuinely concerned about EA, rather than simply being spooked by rumours or speculation in the short-term.

…while the NASDAQ itself saw fairly solid gains in the first half of 2012, EA went into free-fall. To the 50 per cent loss of value in the stock itself, we now have to tack on around 10 per cent of additional losses – since EA’s stock should reasonably be expected to be 10 per cent higher, if it had only managed to perform on the same level as its peers in the NASDAQ.

So what’s going on here? GIBiz writer Rob Fahey hypothesizes that the decline can be traced to Star Wars: The Old Republic’s launch and subsequent decline in subscribers. There is certainly some evidence that it’s part of the picture. He also puts a lot of the blame on CEO John Riccitiello, and rightfully so.

It’s important to understand, and really why I am even writing about this today, that this is not confined to THQ and EA. Big publishers sinking millions into projects are having a tough time sustaining the status quo. Last fall Ubisoft saw a massive drop in its stock and has only marginally recovered and watch out if Assassin’s Creed III flops.

The industry is evolving at an unprecedented speed. Gamers are picky, there are (much) cheaper options available, there are so many other ways to spend one’s free time and the $60 game is fighting to survive. The mega publishers need to adapt to this or run the risk of becoming a 2nd tier publisher or going the way of former top dogs like Atari.

Many games publishers face a tough transition, not merely to next-gen console hardware next year (which is tough enough in itself), but also to a world of new business models and new competitors. Several of them probably won’t make it unscathed, and the stock market knows it.

Take-Two has lost a whopping 30% of its valuation, a staggering number when you consider that the fall occurred well after EA started to slide. As Fahey points out, Activision is one of the few who remain unscathed and as of today has a value three times that of EA. (It helps when you have Call of Duty and Blizzard in the barn.) Still, the #1 US publisher isn’t riding gallantly into the sunset. 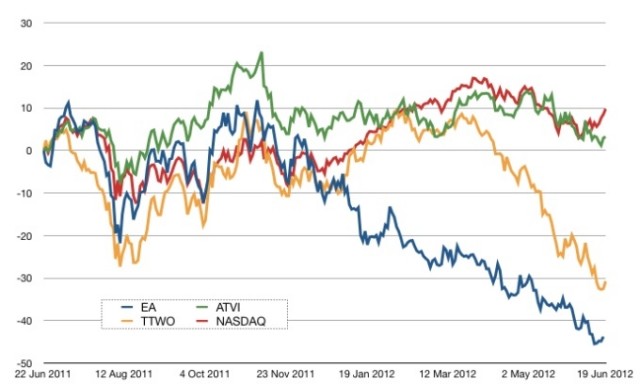 The take from that graph?

In short, the games industry’s most bankable company in the USA right now is only just managing to keep up with its tech industry peers, while the other top two publishers are rapidly spiraling down the plughole.