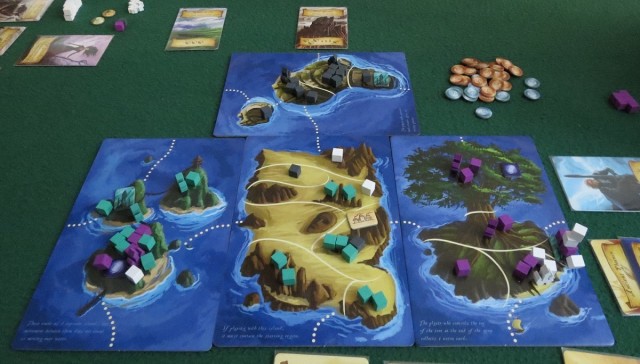 One of the things that I’ve come to value the most about modern board game design is minimalism. Mind you, I still hold a great deal of respect for the sometimes tremendously complex games upon which hobby gaming was built and I still enjoy more detailed, rules-heavy games. But when a game distills the practical essence of a process or even an entire genre down to its barest essentials, I believe what we’re looking at is a highly evolved example of progress in game design. As things get smaller, a lot of dead weight and relatively unimportant content tends to be sloughed off. When minimalist design is at its finest, we get a game like Intrige or Love Letter. Games with zero fat, focused on gameplay rather than elaboration.Enter Ryan Laukat’s Eight Minute Empires: Legends. It’s the second game I’ve played from Mr. Laukat, with the first being Empires of the Void a couple of years ago. That game was a fairly streamlined space 4x title that I felt played more smoothly and at times more effectively than some of its competitors. Earlier last year, Eight Minute Empires made the Kickstarter rounds and now this follow-up- which swaps out a quasi-historical setting for a high fantasy one- has landed on my table and I’m quite impressed with the way it compacts a light Dudes on a Map game with a simple area control mechanic and then drives the whole thing with a card drafting engine.

The result is kind of a “super filler”. It’s more engaging and feels fuller than something like Seven Wonders or Seasons, but it really isn’t any more complicated than those games. It’s also possessed of the same appealing immediacy and easy playability that made those games successful but there is also a stronger sense of direct competition mostly generated by the modular map. Components are minimal, setup is a minute or two.

Each player starts with a little money and if desired, a card indicating that your cubes represent one of four fantasy empires blessed with a special scoring power. The board is a set of reversible, modular pieces depicting land masses divided into regions that can be seeded with some simple encounters if the players want a very rudimentary exploration element. On a turn, a player picks one of the face-up cards on a display with costs ranging from 0 to three gold, shifting the cards down after their choice and altering the market values. The card selected has an immediate effect, which might be to move, place or kill units. It also has a lasting effect that may impart a bonus on future actions or wings that can make travelling over water easier. Each card also has a keyword attribute such as “Forest” or “Cursed” that may affect scoring if a player has a number or set of like-titled cards.

Like in any DoaM games, units are placed, moved, and lost. Areas shift from one owner to another. Castles can be built, creating another spawn point. Drafting smartly- taking into consideration both immediate and long-term benefit- is a key strategy as is leveraging your empire’s special power if you are playing with them.

The game lasts until players have drafted a set number of cards, which varies for 2-4 players. At the end, you get points for having the most units in each region, for controlling the most regions on an island, for drafting the most cards with magic elixirs on them and any bonuses. It’s not exactly eight minutes, it’s more like 20. But I love the title- it’s catchy and it captures the quickly developing gameplay and expedience with which the design achieves its minimalist goals.

Obviously, Eight Minute Empires isn’t as stately as El Grande, as gorily detailed as Chaos in the Old World or as punchy as Nexus Ops. It’s important to go into this game aware of its minimalist agenda and the title spells that right out. With that said, it’s really quite surprising how much game there is in this little box. There is variety by way of the random geography (which includes a couple of special islands with unique scoring) and the sequence in which the cards come into the game at different market values gives the game a sense of strong replayability. The “season to taste” details such as the exploration markers add some surprise and the simple economics of the game make for some interesting financial choices.

If there’s anything to complain about this little game it’s that it’s almost wound too tight. And that results in a sensation particularly in the last third of the game (we’re talking about maybe eight or nine minutes here) that the game isn’t concluding so much as it is rolling to the end of a spool. There have been a couple of games where I felt like the choices in the last part of the game almost feel automatic at best, limiting at worst. And I’ve also felt like a few times that I actually wouldn’t have minded if the game were called “Ten Minute Empires” and went on for another couple of turns. But I don’t know if that would have been the right design decision since this game is all about brevity and the barest essentials.

So it may be that the design cuts a little too close to the quick. There’s not much time for it to breathe. But with that said, the game usually feels like a complete, full game that doesn’t feel as frivolous or flighty as other games in the filler class. There’s some real meat on its bones. It’s definitely the game to reach for when you absolutely, positively want to play a Dudes on a Map/area control game but you’ve only got 20 minutes to do it.