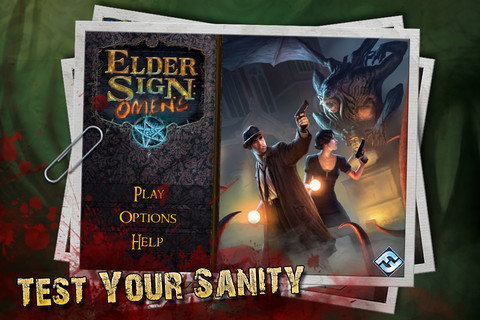 Arkham Horror, a Call of Cthulhu inspired game, tends to be one of those boardgames you either love or loath. I’m pretty firmly in the former category. Yes, despite being a pure co-op game, having a lot of players involved can leave you with a metric ton of downtime and if you don’t like pinning your fate to die rolls it’s probably not for you. I don’t mind all that. Even with a lot of die-rolling, it’s the good kind, where skillful play and use of items (not to mention a little help from your friends) gives you more opportunities to pass whatever magic criteria impedes your path. Not unlike poker, I consider it a fair marriage of strategy and chance. I also like how you have to adjust your play style for the type of investigator you’ve chosen and how you can play the game a dozen times and never use the same investigator twice. Above all, I just like the environment and the feeling it invokes of moving about a dangerously unstable town, populated with unspeakable horrors, as you try to stop an abomination from devouring the world. It sets a mood.

So it was, with this flavor firmly in mind, that I downloaded the Arkham inspired board game adaptation, Elder Sign: Omens for my iPad. Omens is available as a traditional board game (though it’s just called Elder Sign), but not unlike Ascension, this new iPad version takes a lot of board game ideals and successfully translates them to an experience you really could only have on a mobile device like the iPad. (I have not played the board game version. I have no idea how much is the same or different.)

In this game you are tasked with putting together a team of four investigators (whom Arkham Horror players will remember from that game) to stop the abomination, Azathoth, from devouring the world. This is very much Arkham. In this game, however, your investigative acumen isn’t put to the test exploring an entire town’s mysteries, but rather that of a single museum. There you’ll move, one investigator at a time, through its various rooms, seeking out adventures best-suited to that particular investigator and whatever handy gadgets, weapons, or spells she might have on hand. Fail too often and your investigator loses stamina and sanity, eventually resulting in their removal from the game (death or insanity) as a Doom counter moves inexorably forward towards Azathoth’s emergence and the end of the world. The only way to win is to discover enough Elder Signs (also done by completing adventures) to seal the breach between the realm of Cthulhu and our reality.

My kind of game… 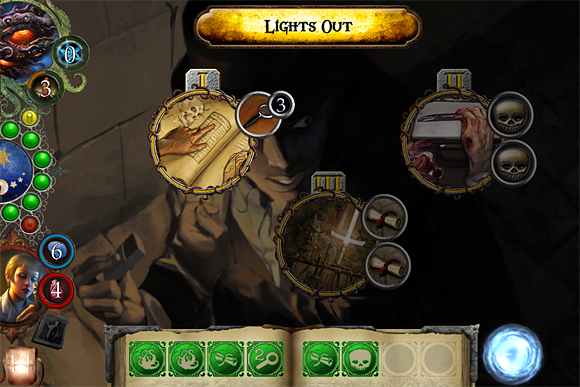 At first, Elder Signs left me a bit put off, and not just because the game is entirely centered around a die-rolling mechanic. Enter The Archives room, for example, and you’ll find a certain number of tasks (usually between one and three) to which you have to match specific types of glyph tokens: Investigation (valued at 1-4), Terror, Peril, and Lore. Glyphs are also color-coded to green, yellow, and red, with green being the default type. You get six green glyph tokens at the start of every adventure. You can then use an item or ability to conjure a yellow token (can summon a 4-investigate glyph) or red token (can summon a wildcard glyph). Some items give you access to both. Don’t be stingy. Use these items. Worry about acquiring more of them later.

Each task has a requirement to “defeat” it. Say, two peril glyphs and a 2-value investigation glyph. If your conjure (roll) doesn’t produce the needed glyphs you have to sacrifice one of them to re-conjure new ones. You keep doing this until you can defeat each task or you run out of the needed glyphs and must suffer a defeat. Defeats usually rob your investigator of at least one of their two main stats (stamina and sanity), but can also result in other effects like an advancement of the Doom track. Success usually nets you items that can help you: Clue tokens (let you re-roll any number of your glyphs without losing one), trophies (think money for buying items or restoring stamina/sanity), or the all-important Elder Signs. You need 14 Elder Signs to win the game. It takes 14 moves forward on the Doom track to lose. (Or the death or insanity of all your investigators.)

I was initially put off because I had no concept of how glyphs were generated and how to maximize the use of my investigators. Understanding this game’s iconography is everything. If you don’t understand what all the symbols mean, and I mean all of them, you have absolutely zero chance of winning the game. There is no muddling through. My advice is to watch the tutorial videos first just to get an idea of how the game plays. Then play one game to complete and utter defeat. Then go back and read the Help pages. At that point you’ll begin to have an understanding of how to put together a coherent strategy for winning the game, which is difficult to do even when you’ve got five or six games under your belt (as I have).

Any such strategy for victory begins with assembling your team of investigators. Make no mistake, like Arkham Horror, each investigator has their own talents and you need to be smart about assembling a diverse team. Gloria Goldberg, whose specialty is psychic sensitivity, gets a free red and yellow glyph when tackling an Other World adventure type. That is, quite simply, awesome. Monterey Jack, the archaeologist, receives a bonus unique item whenever he gains a unique item (uniques generally conjure an extra red glyph). Carolyn Fern, the shrink, can restore 1 point of sanity to any investigator at the start of her turn. And so on and so forth. Each investigator also gets a different allotment of starting items and each has different starting sanity and stamina ratings. 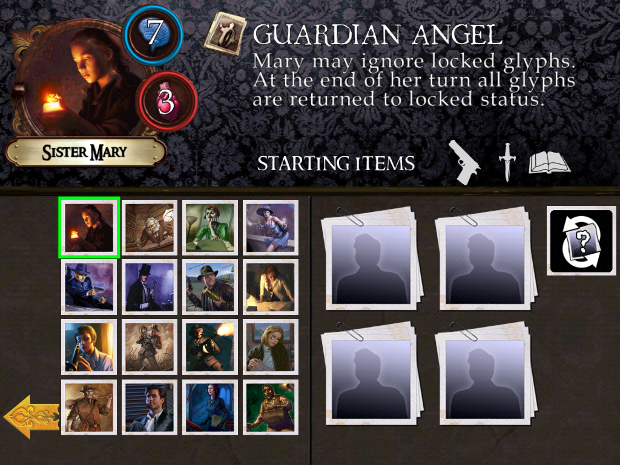 Your ability to smartly match up the investigators you’ve selected to the adventures found in each room is key to winning this game. (Fortunately, you can leave an adventure, scott free, at any time before you summon your initial round of glyphs.) Knowing your investigator’s inventory is also paramount. Only smaller adventures can be dealt with using the base six glyphs and even then you should count yourself fortunate to have summoned the glyphs you needed for a particular task. The number of times I’ve entered a room and found myself one Terror glyph short of being able to do anything whatsoever, only to roll and re-roll my glyphs to no particular gain still drives me batshit insane sometimes. Expect to find yourself shouting “That’s Bullshit!” at semi-regular intervals.

You may have the sense at this point that despite all the cursing, I rather like this game. I do. It’s a fantastic iPad board game implementation. Some will despise the random nature of the glyph roles, but per my previous poker comparison, this is not a purely random game. It still requires a coherent strategy and a lot of risk management. If you rely on just the six green glyphs to complete an adventure that requires five successful glyph rolls, then you are counting on luck to win the day. You will lose more often than you win. Like poker, this game is about knowing when to gamble and when to play it safe. Even the hardest adventures are beatable if you go into them with a character well-equipped to handle its particular needs. Harvey Walters, he of the strong mind, can, once per conjure, change any Terror glyph to a Lore glyph. Sending him to beat an encounter in which you need four Peril glyphs, when the room next door requires a Lore emphasis, i
s just stupid. Don’t do that. Maybe there’s an adventure that rewards you with an Elder Sign, but do you really want to send studious Amanda Sharpe into an demanding encounter with no glyph-conjuring weapons and no items to help her overcome a bad roll? Or do you want to take a breath, play the odds on the Doom track, and use her turn to go to the Entrance and buy something that might help her significantly on the next turn? These are the decisions you have to make constantly in Elder Signs. Cause and effect. Risk versus reward.

There is much more to the game, of course. I haven’t even touched on monsters and monster generation. I haven’t talked about environment modifiers and midnight adventures. I haven’t talked about locked glyph scenarios. There’s a lot to this game. More than enough to warrant giving it a chance, so go check it out with my blessing. Just do yourself a favor: If you’re having a high-stress day and are thinking about loading this game up – don’t. Just don’t.