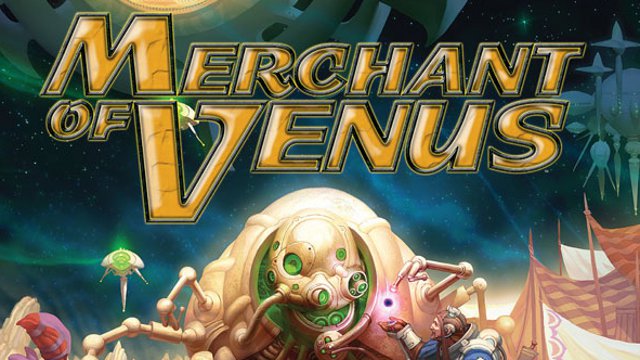 In this glorious age of reprints, there are very few remaining classic titles from the eighties that haven’t seen a rebirth in some form or other. Of those left stranded in the past most of any consequence were by designer Richard Hamblen. Known for his intricate and fiendishly detailed designs, one game in his oeuvre was relatively simple and short and cherished fondly for those exact reasons. And now Fantasy Flight Games has brought it to join the ranks of the resurrected.

Thanks to an amicably resolved licensing dispute between Fantasy Flight and another publisher, Stronghold, Merchant of Venus actually offers two games in one box. One is the original version, re-skinned with lovely new components and some minor rules tweaks and the other has been worked over by Fantasy Flight’s design team. The differences are not minor. While they share the same theme and inspiration the bulk of the components used are distinct even down to providing a double sided board.

In both versions players take the role of intergalactic traders seeking to explore the newly-opened galactic cluster 5632 and look for opportunities to turn a profit. Although the routes for movement around the board are fixed, each game sees a new random distribution of cultures across the planets, each of which buys and sells different types of goods and technology. The setup not only gives the game a fun exploration element, but also means that optimal trade routes will vary between games preventing tried and tested strategies from becoming stale.

The other significant common element between the versions is that movement around the board is dice-based and strewn with hazards. Roll-and-move has been abused sufficiently in other designs to make some gamers immediately suspicious of it, but the version here is full of added choices and subtle nuance and works extremely well, adding variety and uncertainty while leaving players largely in charge of their own destiny. The encounters on your way largely take the form of cash penalties in the classic version, or skill-based dice checks in the new version but both feature some other random variety mixed in.

The original is one of the few feted older games that I had never played, and I what I discovered about it surprised me. It’s a pick-up and deliver game, a well-worn genre that has stubbornly resisted most attempts at injecting theme and excitement into the mix in spite of the obvious possibilities for doing so that it offers. But Merchant of Venus is not only richly varied and exciting but strikes a wonderful balance between advance planning and terrifying entropy. Much like the economics it strives to emulate. And that path down between the two extremes is an electrifying ride. 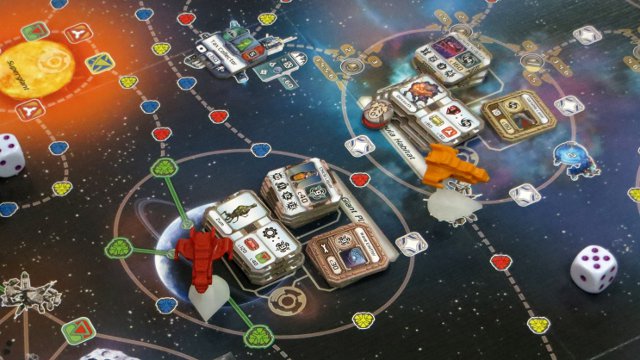 The two rule sets use wildly different mechanisms to achieve a similar end result of market variability. So not only does the random setup mean that profitable trade routes will be unique to each game but during play the value of any one shipment will fluctuate up and down. The game can quite suddenly turn from pick up and deliver to what’s basically a nail-biting race, as players compete to be the first to fulfil demand which then, governed by the iron laws of economics, vanishes into the vacuum as quickly as it came leaving the winner gloating over his credits and the loser with a cargo hold full of junk.

Sadly that’s about the only point of player interaction in the game. The newer version features events that allow players to hit one another with “infamy” points which detract from their end score, and a variant is provided to maximise opportunities to do this but it doesn’t add a whole lot. Mostly you’ll be navigating the vast reaches of outer space alone, which seems appropriate in a thematic way but prevents the spice of player interaction from being injected to enliven the occasionally plodding pace of play.

But those dull moments are the exception. The meat of both games is a tapestry of agonising risk versus reward decisions cloaked cunningly in a narrative of high adventure amongst the stars. And mostly it works like a charm, bewildering would-be profiteers with an array of ways to make and spend money. Buying and selling goods is the bulk of it, but you’re constantly challenged to evaluate whether ship upgrades, passenger charters or buying spaceports for a cut of the profits could be valid ways to recoup your investments while the same mechanics add seamlessly to the unfolding tale. 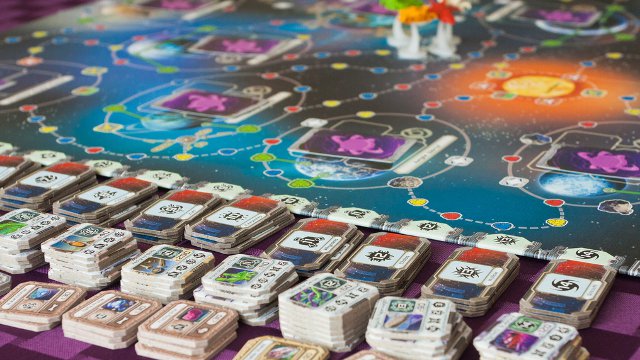 The story and theme are where the considerable changes Fantasy Flight made to the original game engine really show through. Fans of the original have recounted the differences in excruciating detail elsewhere but they boil down to the addition of a great deal of variety. No longer are you constrained to be just a trader. Now you can mine asteroids, fight pirates and complete missions for fame and profit. This does create a lot more choice and flexibility for the player, but mechanically this is offset by a hugely increased reliance on random dice and cards. What’s left is not unlike a translation into board games of the long lineage of space trading video games stemming from Elite.

But there’s a cost, which is considerable extra play time, rules and administrative overhead. And there are aspects of the Fantasy Flight game that reek of insufficient playtesting. The much wider range of new alien technologies you can plug into your ship doesn’t seem to have consistent cost benefit ratios. Amongst these are the Fuzzy Dice which give a considerable score boost based entirely on a dice roll right at the end of the game, a mechanic so obviously atrocious it makes you wonder if it was dwelt on at all. There’s a challenge-based solo variant which is fun but some of the challenges are so random as to be pointless.

Both versions offer considerable charm. I think I prefer the classic rules but it’s a close thing, and those of you who are not time-poor parents may well find the considerable richness added by Fantasy Flight is worth the extra effort and the occasional badly-balanced session. I’m certainly pleased to have both in the box. And I’m even more pleased to have had the opportunity to play this excellent game which, old as it is, doesn’t feel out of place amongst modern hybrids of demanding strategy and exciting randomness. Lack of interaction is unfortunate, but it’s often the first casualty when thinking and thrills are squashed into the same box. And it’s a price I’m happy to pay for another bite at this delicious Venusian cherry.