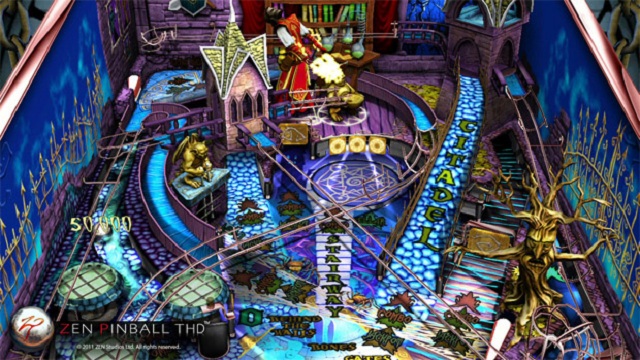 As a past addict of Pinball FX 2 on XBLA, I’ve got a soft spot for a solid pinball experience. Despite having had a constantly malfunctioning, but nevertheless awesome, classic racing-themed pinball machine in my basement when growing up, I’ve never been much of a pinball savant. Lack of skill, however, has never stopped my love of knocking that little metal ball around. In a couple of weeks a buddy of mine, who restores old coin up games, is hosting a party to christen his new “barcade” and as much as I’m looking forward to spending time around he and his wife and several of our friends, I have to admit I’m really jonesing for another go at his limited edition Tron Legacy pinball machine.

It’s an incredible piece of work, that thing. It’s also a reminder, however, of how frustrating the viewing angle is when I play Pinball FX2 on the Xbox. Tables are meant to be oriented exactly the opposite of our television widescreens, so it’s always a chore to find a view that I can live with when playing Pinball FX. It never occurred to me it might be different playing such a game on the iPad, where you can rotate the screen in your hand. So last week, upon learning there’s a Zen Pinball iOS app, I rushed to the App Store to give it a go. I wasn’t holding my breath for a great pinball experience, but I’ve been pleasantly surprised. Zen Pinball delivers the goods.

The biggest stumbling block in playing Zen Pinball is just figuring out how to hold the iPad when you’re trying to play. You operate the flippers by touching the side of the screen corresponding to each flipper. Finding a comfortable way to hold your iPad and still have the kind of instant twitch access you need to target a shot while the ball moves at speeds resembling mach 6 isn’t as intuitive as you might like. I had to start removing the SmartCover from my iPad when playing just to take that little extra bit of weight off and make holding it up in portrait orientation a little less unwieldy. I’ve also tried propping the device up with a book under it, laying down on the couch with my knees up and backstopping it with my legs, and just about every other ergonomically impossible setup you can picture. The good news is that once you find a comfortable spot and train your thumbs just a bit, both very doable, the app absolutely sings.

After trying the Williams Collection pinball game on the 3DS, I was dubious that pinball on a mobile platform would ever be for me. The 3D was admittedly pretty awesome used with that kind of game, but the small screen just didn’t provide a good experience. The iPad’s screen is obviously bigger and that helps, but really it all comes down to orienting it so you can see the whole table. There’s no need for you eyes to keep re-focusing on a rapidly panning camera as the ball shoots all over the table. Just like a real table, admittedly a small one, you can shift your focus wherever you need it to be and there’s no need to fight against the game’s camera. That’s a godsend.

If you played Pinball FX 2, you’ll be familiar with the set of tables available. It’s not as broad as the XBLA version, but there are currently six tables, three of the Marvel variety (Captain America, Wolverine, and Thor) and three originals (Sorcerer’s Lair, Excalibur, and Epic Quest). The game only comes with Sorcerer’s Lair, a table I haven’t been able to get into yet. The rest will cost you between 99 cents (for the non-Marvel tables) and $1.99 (for the Marvel variants). I’ve picked up the Captain America table and Excalibur and they’re both excellent quality. I’ve also read some good things about Epic Quest, which I’ll likely make my next addition. 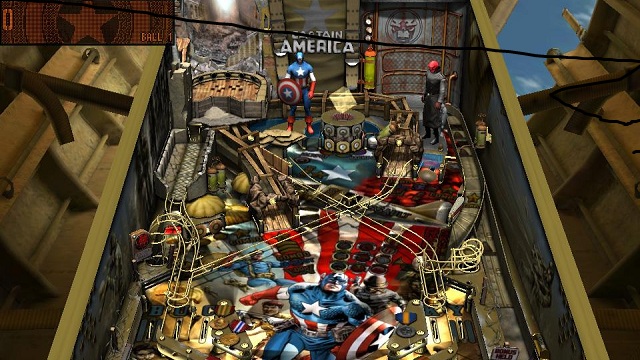 The question of physics is one I’ll touch on only briefly as that’s not something for which I have a good eye. At first glance the games appears smooth and wholly accurate, though perhaps a touch light on the ball weight. After a few hours of play, though, it seems to me the iPad 2 screen is a fraction of a fraction of a fraction off in terms of rendering what you see relative to the ball’s actual position. There are a lot of times where the result I get from a shot doesn’t quite seem to reflect what I’m seeing on the screen, particularly when shooting very low angle shots. This could also be denial that my 37-year old brain can still read and react the way I imagine it used to. In my defense, however, whenever a notification pops up during play, the frame rate slows to a crawl, which tells me the game is pushing my iPad to its limits. It would be interesting to hear from an iPad 3 owner if there’s any difference when played on one of those devices. (Zen Studios has yet to update the app for the iPad 3’s retina display.)

For pinball fans with an iPad, this is a no-brainer download. The base app is free and comes with the aforementioned Sorcerer’s Lair table, which does make swallowing a dollar or two for each additional table not so bad. You can get hours of entertainment from a single table and, for those as confounded by the layout of these things as I tend to be, you’ll be glad to know each of them has an accessible guide in the app that highlights all the different minigames and challenges you can complete to amp up your score. There’s even an Operator’s Menu for those that want to get into a table’s guts and tweak how it operates. And, thankfully, there is hotseat multiplayer for up to four players, along with the obligatory online high score tracking. All in all it’s a good value and an addicting app. Combine the portrait screen orientation that allows full view of the tables with the fact that you can pull it out and play for a few minutes at a go wherever you happen to be makes it all the more attractive relative to the console-based versions. This one gets the ole thumb’s up.