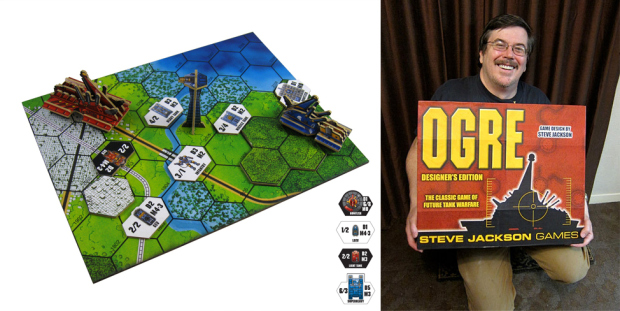 Last week I took delivery on a copy of the Ogre Designer’s Edition, the 28 pound monstrosity that Steve Jackson crowdfunded through Kickstarter to the tune of almost a million bucks. No, don’t be silly. Of course I didn’t back it. I bought a copy through a retailer for a cool $65. I’ll take a savings of $35 over a couple of extra counter sheets, not to mention retaining my anti-Kickstarter party line regardless of the fact that this was one of the better justified and better run campaigns that I’ve seen. Ogre is one of the all-time great games, one of the seminal titles in the hobby spectrum, and after being out of print for years I should be thrilled to pieces to have this massive, supposedly “ultimate” edition of the game.

I feel like I had a 28 pound fruitcake dropped on my porch. Can’t really sell or trade it because it’s so big and heavy, and that means mail is going to be too expensive. Don’t really have anywhere to put it because it’s the size of an end table. I’ve seen all the oohs and aahs online as people react to the size and component density of the game, but I can’t help but feel 28 pounds of disappointed with it. I’d be happier with my old VHS box edition with all of the expansions, but I’ve somehow lost it. I had promised it to one of my online buddies who was shrugging off the unnecessary bulk of this new edition. I think he was right about it.

Sure, the cardboard clip-together models of the Ogres are really cool and so are the 3D buildings. But do I really need so many of them? I’ve been playing Ogre since I was a kid and I don’t think I’ve ever played a game where we’ve fielded six Mark IIIs. The big counters and large, mounted maps are definitely an improvement from the old cut-out chits and flimsy paper maps, that’s for sure. But what’s the point of having extra sheets of mercenary units that- again- I’ll likely never use. The maps are awesome, but I’ve never really cared anything about terrain overlays. But here I am with sheet after sheet of them. One of the greatest things about Ogre in the past was how simple, tight, and contained it all was, even with all of the expansions. This sixth edition set makes it all seem sprawling, excessive and cumbersome. It’s almost enough to trick you into thinking that Ogre is a lifestyle game.

The larger size of everything makes it easier to play with a group than the classic editions and really kind of puts it more into line with the Ogre Miniatures game. I appreciate that, and already my group is eager to get a multiplayer game going over the holidays. That’s something we could never do reasonably with my tiny set from the late 1990s But I can barely fit this damn thing through the door to where I store my games and I had to clear a shelf for it. It’s just massive, and it’s one of those things that seems like it’s always in the way.

It’s really kind of silly to complain about the component quality and product design given that it’s only $100 retail (and Jackson claims that it would normally cost $300 under standard development, production and distribution processes), but I’m pretty disappointed that the game looks nowhere near as distinctive as it has in the past, particularly with the original retro-future counters. It looks and feels about like a Steve Jackson game from the mid 1990s- just blown up to massive size. Some of the art and design looks straight out of that era. I’d rather the whole thing look either out of 1977 or 2013 than 1995.

But oh, you can buy a $25 set of day one DLC “classic counters” along with a number of exclusive counter sheets made available to backers who pledged into the thousands of dollars. One of them, if you’re a completist, is going to be a pain in the ass to get because it was only available through ACD Distribution. That means that if you bought a retail copy from a seller that uses Alliance, Blackhawk, or another distributor then your copy doesn’t have them. It’s like retailer-exclusive content in the video game world.

But here I am complaining about not having extra counters and units in a game that already really has too many. It’s strange to feel this way about a game, but there’s just too much Ogre. Yet there are scenarios and content from the Ogre Book, Scenario Book, and other expansions that aren’t in the box. There is no historical content- I’d have loved to have had a booklet showing the different versions of the game, some history, and maybe some of the classic articles or fiction written about it. Nope. All of that is available elsewhere, but this was a chance for this to be all of Ogre in one box and I feel like that was kind of missed.

Regardless of the lack of documentation, the new rulebook is great. It condenses the main material that was previously available in different places into one booklet. Even better is the free IOS/Android game aid app that the Kickstarter campaign also helped finance. It’s outstanding, putting all of your Ogre record sheets on the phone and calculating odds for you. It makes the game easier to play overall- even if you’re just using an older set.

I don’t doubt that Steve Jackson’s heart was totally into this and it is very clearly both a labor of love and a reciprocal appreciation of Ogre shared by both the people that backed it and the designer. One thing’s for sure, you can’t complain about the game itslef. It is still, in my opinion, one of the starkest and most simply effective wargames ever made. The original Ogre scenario is grim and ruthless, with infantry being ground into dust under the treads of a monolithic cybertank. The GEV part of the game brings in more diverse terrain and slightly more detailed rules that make it one of the most fun ground war games ever made.

Maybe I’m just being extra Scrooge-like this holiday season. Maybe I’m the Ogre Grinch, complaining about what is, regardless of my bitching, likely the most complete and highest quality version of the game to date. When I’m playing the game and the box is out of sight (meaning that it’s out in the garage), all of this doesn’t’ matter. Because it’s still Ogre/GEV, and therefore it’s one of my all-time favorite games. But did it have to be so damn big? I guess when it comes down to it, I have tremendously mixed feelings about the new furniture in the house.

The punchline to the “size matters” sixth edition of Ogre is that the Kickstarter campaign also guaranteed another Ogre release. A reprint of the original 1977 edition- the one with the awesome Winchell Chung artwork and classic styling that is nowhere to be seen in the Designer’s Edition- is due in the summer of next year. It will retail for $2.95, the prices that was on the original Microgames edition of the game.