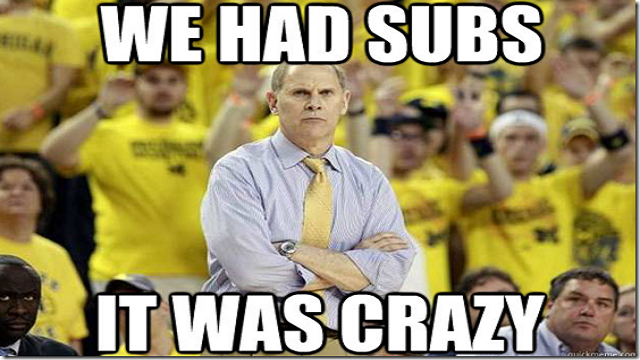 So, yeah, there’s no JTS post this week because there’s no JTS this week. We’re sorry about that. But you tell Brandon he shouldn’t be exhausted from his move or Bill that he shouldn’t watch OSU’s elite eight game live or me that I shouldn’t enjoy a pre-spring break evening with my kids since they were about to spend the week out of state. The stars aligned against us this week, but we’ll be back and all will be well. In the meantime, it’s Tuesday and things happened. Richard Garriott was kind of a dick. Bioshock Infinite was awesome, but not as awesome as everyone says. Also, Michigan did something even more awesomer… and there were subs… it was crazy. (God, but I love MGoBlog’s style.)

Richard Garriott and the Art of Winning Friends. I mentioned a couple of weeks ago I wasn’t all aflutter about Garriott’s Ultima-rebooty thingy, Shroud of the Avatar. The game’s presentation itself wasn’t really enough to grab me, though I’ll always follow anything the guy does. Maybe it’ll work. But regardless of that, I have to say that Garriott going around acting like a dick isn’t helping matters when he says things like this:

“You know, I go back to the day when I was the programmer, I was the artist, I was the text writer, etcetera,” said Garriott. “Every artist we’ve ever hired ever is infinitely better at art than I ever was. I was never a good artist, or audio engineer, or composer. I was a pretty good programmer, but now all of our programmers are better than I am—but if I’d stayed in programming I could probably keep up.

“But other than a few exceptions, like Chris Roberts, I’ve met virtually no one in our industry who I think is close to as good a game designer as I am. I’m not saying that because I think I’m so brilliant. What I’m saying is, I think most game designers really just suck, and I think there’s a reason why.”

Yes, he’s trying to make a larger point in proclaiming to PC Gamer that other game designers suck and nobody is really as good as him. And, yes, a lot of sites ran with the “they suck” quote without providing any context to it at all. (That context being that people are trained enough to be designers as opposed to the usual artist, programmer, janitor roles.) And, yes, in context, and wading through all the prideful braggery, there is a reasonable point to be made. But let’s not pretend Garriott A) didn’t know exactly what he was saying and B) wasn’t being a dick about it. He was. A consummate dick, in point of fact.

Then, when the whole thing blew up on him, as was inevitably going to happen, instead of offering even a token apology that hinted maybe he should have used different words, he went and insinuated it was PC Gamer’s sensationalism that caused the stir and, oh, here’s what I really meant now that I am being shamed into acting more reasonably. And PC Gamer’s Logan Decker, instead of starting a ridiculous flame war, took the high road and said, hey we don’t think we’re to blame and we even sort of agree with the man. It’s nicer than I would’ve been about it.

It’s hard to watch a guy you really rather idolized for a very long time behave this way, especially when he really hasn’t done anything noteworthy for gaming in 20 years. Maybe if there were a line up of great 21st century games to his credit I’d be more willing to accept that bravado. There’s not. Given that, just a small dose of humility would be nice. It is one of Ultima’s eight virtues after all.

Infinite Praise. Except Not. Tom Chick is taking heat for his Bioshock: Infinite review from exactly the sorts of people you’d expect. I’ve only got a couple hours spent with the game (I’m barely even into the shootery parts) and even based on just that taste I can tell you that he’s absolutely right about this game. It’s a beautiful, beautiful package. It’s also the same damn shooter we’ve been playing. What’s funny to me is Yahtzee called this one waaaay back in his review of the first Bioshock game (right around the 44-second mark) .

Infinite is System Shock 2… too. They’re all the same game, mechanically speaking and at this point I don’t think it’s completely out of line to call Irrational a one-trick pony. They’re just really, really, really, exceptionally good at that one trick. Nobody does that trick better. And, you know, that’s okay. It beats the hell out of yet another Call of Duty. That doesn’t mean, however, that regardless of how good the setting is (and Columbia is amazing) that it’s not all getting to be a bit rote to actually play through. Bioshock at least had a decade separating it from System Shock 2. We had warm fuzzy memories, but little in the way of equivalent experiences. Now, we’ve done that. It was practically yesterday and I don’t think it’s asking too much of Irrational to suggest they need to come up with something more than shoot with this hand, use magic with that hand, listen to some audio logs, and scrap for money in trash bins. You don’t have to re-revolutionize everything, but a bit of game mechanics evolution to go with these brilliantly imaginative environments would be swell is all. Also, the save system sucks. Hard.

Final Four!!! It’s been 20 years and a lot of dark times since the maize and blue of Michigan saw Final Four action. Down by double-digits with just a couple minutes to play (and a statistical .6% chance of winning the game), that elite eight victory over Kansas had precisely zero business happening, which makes it all the more glorious. That game-tying three from Trey Burke in the waning seconds to send it to overtime will live in tournament lore forever. Also, there were subs and it was crazy. M fans, you have a T-shirt to buy.