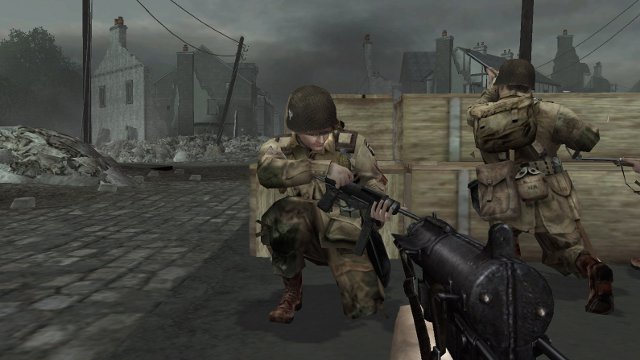 I am the veteran of a thousand battlefields across all of time and space. From the Halo ring to the remnants of Silverspring my guns have sung their dirges of destruction and my swords and axes have bathed in gore. I have seen wonders beyond belief: the jeweled skies of Na Pali reflected in the shimmering surface of Tarydium crystals, spectral monks flitting through snow shrouded ruins on the coast of Ireland, blossoming fire from an interstellar bombardment enveloping the Strogg citadel. Across the dimensions I have endured horrors unimaginable and left unnumbered dead in my wake.

And yet, as I brood now in the gathering gloom of my obsolesce, there is nothing I can recall quite so clearly as Normandy, Earth in 1944.

I, who stood before the cyber-satan of Mars and laughed my mocking laugh, lay prostrate with terror behind a pile of logs as the combined fire of a German platoon tore up the wood behind my back and span through the air so close above my head that I could feel the heat of the tracers. Smoke and cordite hung in the air, mixing with churned earth and chipped sawdust that stuck in the nose and choked the throat. There was no way I could even raise my head above cover to shoot back without taking a bullet in the brain.

Luckily, I wasn’t alone. Trying to compose my fraught nerves and to make myself heard above the griding din of mechanised warfare, I started to bark out instructions to the two squads under my command. One work to the left, lay down some suppressing fire to give squad two the chance to dash a little nearer. Then vice-versa so that they slowly began to inch their way toward the enemy positions where one, I hoped, could outflank a squad or a machine-gun emplacement, and destroy it.

Those were my instructions. But once those boys had gone, I couldn’t see them any more. I had to hang tight and pray that they could follow my instructions and manage not to get themselves killed in the process. It was a nerve-racking few minutes crouched behind my flimsy cover and listening to them shout and yell to one another whilst rapid crack of their semi automatic M1 rifles mixed with the lower rumbles of the bolt-action German models. But eventually the volume of fire on my position began to lessen. After a couple more minutes I was able to risk a look to try and ascertain where the remnants of the enemy were, then to dash out myself and sneak round behind where my troopers had pinned the last few stragglers and finish them off myself.

With all the myriad of memories that I have of gunfights in the far-flung reaches of space, why do I remember this so clearly? I remember it because it was a moment which was utterly unique. I’d commanded soldiers before but they were just mindless cannon-fodder that charged into the fray at my back, to be mown down like dry grass in the wind. Here, they were my salvation, and I needed to flex some proper tactical muscles instead of just physical ones to triumph over my enemies. There is nothing – nothing – in all my long years of warfare that can compare.

I remember more, too. I remember the cold terror of charging into a bank of mist and engaging German

paratroopers in blind, desperate hand-to-hand fighting. I remember directing my men to defend the bombed out shell of a Cathedral as I sat in the spire, sniping at the enemy soldiers through a scope, worrying about their safety and consumed with the creeping fear that armour might show up and blow us out of our fortified positions with heavy weapons. I remember the awe of inching across the desolate landscapes of ruined St. Sauveur under a storm-laden sky, filled with foreboding in case the artillery that caused such destruction was still zeroed in and primed to fire. I remember all this because there was genuine fear in knowing that a single bullet would mean the end and having to start over. I remember it because it was so terrifyingly real, to the point that I could recognise portions of the landscape from photos I’d seen in history books. I remember it because, unlike all the other fantastic places I’d wielded a weapon and killed my enemies, it actually happened.

I have these memories thanks to the Brothers in Arms games Road to Hill 30 and Earned in Blood, about my favourite video games ever. They were hardly flawless. Tactical shooters such as these, especially ones that put such a weight on the behaviour of friendly units, live and die on the strength of their AI and that of the BIA games weren’t quite up to the enormous load that the game model put on them, although I’m not sure even modern hardware and software could quite measure up to that challenge, so what we got back then was truly outstanding by the standards of the time. But ultimately I can’t really disagree with the critical consensus that weaknesses in the AI made the game occasionally frustrating in the extreme. It’s pretty hard to watch as you order a fire team into cover, observe two of your men follow your orders to the letter showing that your command has been understood, while the third stands bolt upright in the open and promptly gets his head blown off. It’s harder still to watch this performance repeated over and over again as you try and replay that section of the game.

But in the end the game was easily – easily – absorbing and original enough to compensate. Nearly every other game in the “tactical shooter” genre with which BIA got lumped involves creeping through unlit, unpopulated corridors for ten minutes and then waiting behind a pillar for a further ten minutes to try and understand the movement patterns of the guards before someone spots you and cuts you down in a hail of gunfire. Not entirely my idea of fun. But in BIA you got a seamless blend of furious FPS action with a real-time tactics game that simultaneously challenged you to twitch like a demon and think like a general. 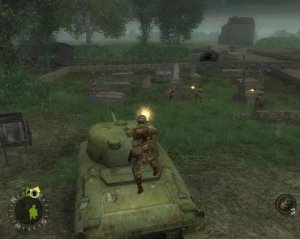 That would have been enough to make it a brilliant game, but what lifted it into the realms of the extraordinary was the attention that developers Gearbox gave to authenticity. Many of the missions from the game were lifted direct from history, and many of the environments painstakingly re-created from actual historical photographs. If you know any world war 2 history, hell, if you’ve ever watched Band of Brothers (which the developers clearly did and had) you’ll feel an ominous sense of dread and recognition as you approach the town of Carentan or the Battle of Bloody Gulch. The game exudes detail and atmosphere from every pore: artillery pieces you’ll plant charges on and tanks you’ll ride on are perfect replicas of the real thing, and they even remembered to include the characteristic “ping” noise that M1 rifles gave off when their clips were empty, to let the user know it was time to reload. It was built into the mechanics too: you couldn’t aim accurately unless you stood still, and under fire your gun would wobble precariously to simulate the stress, so you absolutely had to leverage the tactical element of the game in order to succeed. Most brutal of all was the injury model where even a couple of wounds could kill you, and a sparse save-point pattern which discouraged risk-taking and came the closest that a game perhaps ever could to making the player genuinely fearful about the prospect of being killed. The combination of intense, challenging game-play and authentic atmosphere lead, for me, to a truly unequalled sense of immersion in the game world.

Of the two games, I think I loved Earned in Blood the most, even though it got lower critical scores. People rubbished it a little because game-play wise it was identical to it’s predecessor and they felt it should have been released as an expansion rather than a stand-alone game. But I didn’t care: it had better AI, a more compelling story, a free-play sandbox mode for multi-player or bots and more historical weapons and missions, more of all the stuff that made the franchise so engrossing in the first place. Sadly I don’t own a current generation console (shock! horror!) so I’ve not managed to play the sequel Hell’s Highway which looks excellent but abandons a little of the realism of the earlier games in favour of a more casual and exciting model which probably has slightly wider appeal for the majority of gamers: still, it’d certainly be the very first game I purchased for a new console should I acquire one. I’m still hoping there might be another sequel set in the Battle of the Bulge, although there the series will have to reach its conclusion in terms of story arc, since that was the last major action the 101st airborne fought. But it was also, arguably, the most difficult, the most heroic and the most likely to make for an astonishing story and experience. If they do choose to do it, I hope to God that they get it right.