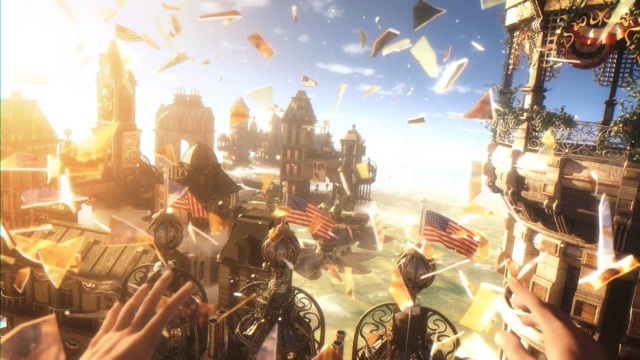 Last night, I was playing the much-ballyhooed Bioshock Infinite. I had rescued Elizabeth, a dead-on cross between a Disney princess and one of the kids from Akira voiced by someone that sounds straight out of drama school, from her towering monument. We wound up on a beach. Sunbathers relaxed in the warm, Maxfield Parrish-like glow that blankets virtually every visual in the game. It was a peaceful scene after a hectic action sequence. As I’ve done in System Shock 2, Bioshock, and Bioshock 2, I dutifully looted everything in sight. Right there on the beach, in a picnic basket, I found some machine gun bullets. Suddenly the world of the sky city Columbia- which is really described mostly through advertising posters and cute graphic design- fell apart and I was just playing another idiotic shooter with tedious looting, ho-hum gunplay, and pointless bloodshed that does nothing for the story but provide the player with something to do in between the movie parts.

Columbia fell apart again when I made it to the vaunted Hall of Heroes sequence that some have mentioned as a high point in the game. It’s a walk-through carnival exhibit/museum celebrating the military exploits of Columbia’s founder- who apparently took great liberties in embellishing his role in quelling the Boxer Rebellion and his participation at Wounded Knee. Suddenly- as former Gameshark writer Mitch Dyer once said- that this game wants to have Something to Say About America was literally blasting me in the face with far more deadly accuracy than any of the braindead AI thugs that routinely run up and try to bludgeon you while you shoot flocks of birds and rocket launchers at them. I suppose if I weren’t 37 years old and hadn’t already sorted out that America has a history of revisionism, hubris, bloodshed, and outright racism I might have been shocked or fooled into thinking that this supposedly ambitious, supposedly intelligent shooter had a profound or meaningful statement to make. But it doesn’t. Throughout the entire segment, I was all too aware that I was playing a video game trying far too hard to be meaningful or resonant. It comes across as silly, childish, and naïve. Like a fifteen year old telling you that the government is, you know, real bad man.

The politics are trite enough but the world of Columbia- and in fact, the entire game that is Bioshock Infinite- is a house of cards that completely collapses every time you dig through a trash bin to find a hot dog and some money or when you rob an ice cream shop’s cash drawer and the family eating there just sits, going through a repeated animation. Or when you walk around carrying a shotgun in a penny arcade and no one minds. And also when you do things like jump 50 feet in the air to hook a “sky hook” onto a latch and slide around on rails just like Samus did in the floating city that was in Metroid Prime 3. No review I’ve read has mentioned this similarity.

The problem is that so much attention to detail- even if it is facile, juvenile, and completely superficial- tricks the player into thinking that the frankly quite dated gameplay is something more than it actually is, and when the façade drops as video gamey concepts intrude (like a hat that gives you combat bonuses) what is revealed is a stunningly mediocre game with little actual substance. It looks incredibly expensive. It’s cosplay-ready. It apparently won 80 Major Awards before it was released according to one banner ad. Tom Chick’s negative review was flamed to hell. It’s one of the few recent games to hit the high 90s on Metacritic. So it has to be good, doesn’t it? Right?

Mind you, I loved Bioshock and I loved Bioshock 2 even more. Those games had Big Heady Themes too and they had some of the exact same mechanics. It’s not too hard to map the “vigors” to the “plasmids” if you want to compare the whole left hand magic thing, which is totally incongruous with this game’s setting. Those games were shooters as well, and so was System Shock 2. But those games knew their places, and they had more restraint. There was so much more subtlety and ambiguity rather than ambition and excess. They weren’t trying to shock you with OMG racism. The second Bioshock had one of the most profound statements about parenthood I’ve ever seen in a video game, and it also had some amazing tactical combat. The first game had atmosphere, mystery, and this incredible sense of aftermath. Bioshock Infinite has none of the above, even though it copies the much less interesting parts of its predecessors down the line. Without the more compelling qualities of the past games, it’s just a dumb shooter. Don’t kid yourself.

That anyone is finding the writing intelligent or thoughtful blows my mind. Last night, when I hit one of the big plot twists, I almost felt insulted that it was presented as one. Elizabeth bellowing “yeah, well, just because I want a puppy doesn’t mean I’m going to get one!” had me laughing. I mean, seriously. Who writes this shit? Haven’t we outgrown “this is great writing…for a video game” yet?

The violence is more evidence of this game’s stupefying immaturity. For the first 30 or so minutes of the game, I was kind of buying it and I was enjoying the process of discovery. The intro is very well done. There is a sense of revelation and wonder. But then, out of nowhere, I’m chopping some guy up with the sky hook and suddenly I’m a one-man butcher shop mowing down people. The sense of adventure and imagination is gone, replaced by dull slaughter. Every gunfight is dull as dishwater in the game, and even on the hardest difficulty there are no tactics or strategies required. The vigors are boring because they’re just the plasmids. I’m just shooting people because, well, that’s what you do in video games, right? And I say this as a person that likes shooters.

So Irrational has gone and done pretty much the same thing they’ve done since System Shock 2 with the only upgrades being budgetary or technical. Everything else feels like a downgrade. It’s a game rife with hubris and preposterous self-importance, desperately trying to hide that it’s just as shallow and meaningless as a Call of Duty campaign. Tonight will likely be my last night playing it before I look up the ending on Wikipedia and go back to playing Injustice, or possibly even firing up Metro 2033 to get ready for Last Light. I don’t know why I’ve given this game so many chances to validate itself. Maybe it’s because I can’t believe it’s been so widely praised. Or that so many people have been fooled into thinking that this game is anywhere near greatness.