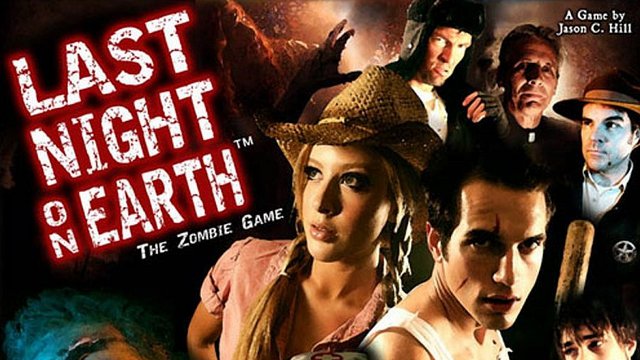 I don’t believe there’s a meme in all of geekdom that’s been used and abused quite as much as the good old zombie. It’s been in films, books, comics and videogames that span the chasm between sublime art to complete trash. And speaking of trash, you’ll find a hundred of them in Zombies!!! which is perhaps the worst hobby board game ever committed to card and plastic. But game-playing zombie fans need not despair, because there are many better zombie games to try. One of them is Last Night on Earth, and the question is: how much better?

Well for starters, compare the box of Last Night on Earth with that of “generic zombie game #346”. Notice anything different? GZG #346 will certainly have some low-grade pop art on the front. Last Night on Earth, by contrast, features photo-based art of actors and actresses in costumes and special effects makeup. It’s a striking and realistic look (realistic enough to terrify my children) which is carried on throughout the card art. There’s also plenty of well-sculpted plastic miniatures of heroes and zombies inside the box and a pleasingly gloomy modular board. The photo art isn’t to everyone’s tastes: some people think it looks tacky. Personally, I love it and with the other high quality components I felt compelled to list this as one of the five best looking games ever made.

There’s also a CD in the box which is allegedly filled with “atmospheric” synthesizer music. A most unusual gimmick, but the less we say about this the better.

So we’ll move swiftly on to the game play. The rules are pretty simple. Usually one player is the zombie master and four heroes are distributed amongst the remaining players. Zombies move one space per turn and spawn continually at the board edges. Heroes can choose either to move or, if they’re in a building, to search for items. They roll a dice to determine movement, a mechanic that seems to be frowned on nowadays but which works perfectly well here since they can still choose to move any amount up to the dice roll, and get to see the dice before they decide to move or search. So there’s enough choice to keep things interesting. Combat is highest dice wins. Heroes roll more dice but need doubles to actually kill a zombie, otherwise simply fending off the ravenous undead and leaving it to fight another day. That’s the essence. 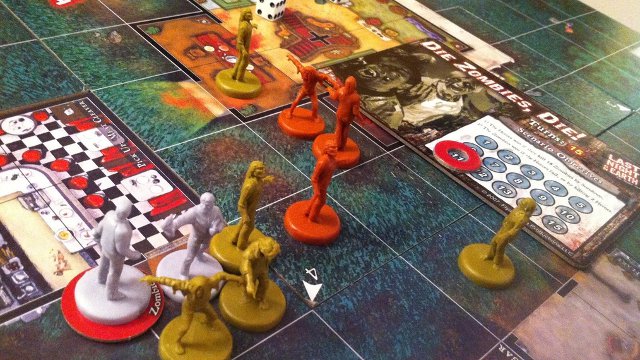 Given the rules are so simple then, you might be surprised to find the internet littered with extensive FAQ’s about the game. The reason for this is that each side gets a substantial deck of cards with varied and colorful effects to put into play that modify the core concepts of the game in various ways. There are weapon cards for the heroes, and they’ll need them if they hope to kill zombies rather than just survive their attacks, and lots of event cards for both sides. Most add appropriate narrative and are exciting to use, such as an effect that suddenly traps a hero in a dark building full of zombies, or another that boards up windows and doors to limit zombie movement. A few are also silly such as the titular “Last Night on Earth” card that causes a pair of mixed-gender heroes to lose a turn. Mix in these card effects with a unique power for each hero in the game, and it appears to be a recipe for confusion.

So if the rules and cards and powers together end up as a chaotic mess, that makes it a bad game, right? Well, frankly if you’re stopping this game every few minutes to look up an official ruling for a card effect, then you’re playing it wrong. This isn’t a game where you should be examining rules minutiae to gain the upper hand. It tells a wild and thrilling narrative arc, and tells it well. It’s about throwing dice, slapping down cards, making zombie noises whilst exulting at the highs and complaining at the lows. Given that it usually plays in 60-90 minutes, the time frame fits the mechanics pretty well. If you can relax, play from the hip and just go where the ride takes you then most of the time it’ll take you on an exciting session of horror themed board gaming.

That probably makes it sound like a zero strategy game. And while it’s pretty lightweight, there’s a little more going on here than some people seem to give it credit for. Oddly this has very little to do with card play and management as is often the case in these sorts of games. Mostly you’ll play cards as you get them, or engineer situations where you can use them. No, the strategy is all positional. One of the more unusual and interesting mechanics is that the central outdoor squares are bigger than the indoor ones at the board edges, so you can cover more ground in open areas. Moving across the central area thus become a rather fraught exercise for the heroes. The zombie player has to try and distribute his undead to catch heroes dashing from cover to cover in a hideous parody of tag whilst being mindful of a rule that forces his pieces to attack adjacent heroes. It’s not too difficult, but it’s not entirely brainless either. 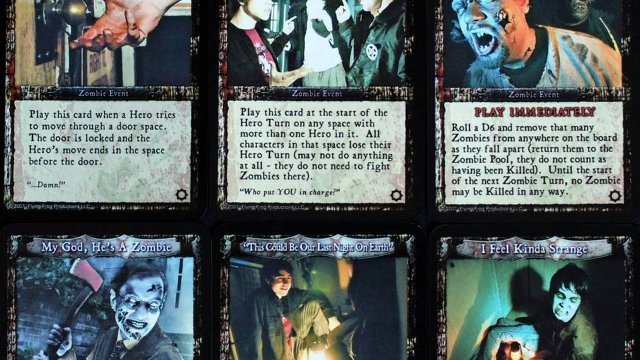 To improve both replayability and the storytelling angle of the game, it offers a variety of scenarios. The basic one just sees the heroes needing to rack up a certain number of zombie kills before a turn limit expires but it’s tense and fun for all that. Another sees the open center of the board replaced with a manor house which the heroes must defend for as long as possible, and that makes the most of the tactical side of the game. The rest are problematic because they all depend on the heroes drawing certain cards from the deck to win, so sometimes they’ll do it easily and sometimes it’s impossible depending on how the shuffle goes. Thankfully there are several very good scenarios you can download from the publishers website to replace those annoying search based ones and retain the replay value and variety offered by a scenario based game.

Genuine scares aren’t something that a board game can offer. You need to be too much in control of your fate and in possession of too much information when boardgaming to make fear a realistic possibility. Last Night on Earth therefore wisely aims at the tackier end of the zombie market and pulls it off extremely well indeed. From the shlock-horror artwork to the twist and turn game play and the B-movie narrative of the scenarios there’s a ton of fun to be had with this. It doesn’t always work: games occasionally run long and exhaust the value of the strategically lightweight gameplay, and sometimes the cards and dice don’t work their random magic and the game falls flat and lifeless. But mostly it does work, and the cheap afternoon horror matinee unfolding on the table before you will, like cheap features everywhere, suck you into its box of bad taste delights.