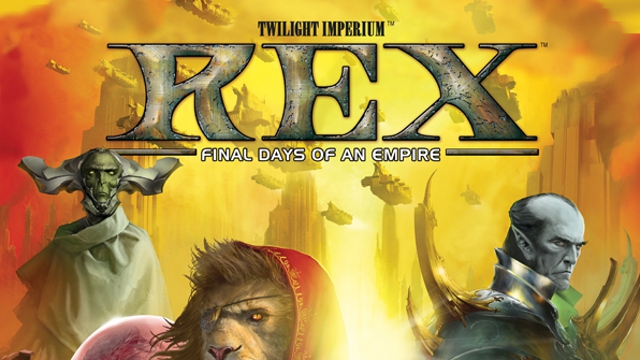 Over 30 years ago, the famous Eon board game design team released Dune, a game based on Frank Herbert’s famous science fiction novel of the same name, and so far ahead of its time that gamers in the early 80’s weren’t quite sure what to make of it. After a reasonable print run, it vanished, never to return again thanks to the legal complexities surrounding the licensing of Herbert’s intellectual properties. And in the meantime its reputation, fueled no doubt by its unavailability, grew, and grew, and grew, as did the price of second hand copies.

After heroic wrangling with the parties involved, Fantasy Flight Games managed to get hold of permission to reuse the mechanics, but not to place them in the Dune universe. So they instead opted to shift the action to their own Twilight Imperium setting and the result, after years of waiting, is Rex. The publisher sent me a review copy so I could find out for myself whether it was worth the wait.

Since this is effectively a reprint of the earlier game, I cannot reasonably review it without reference to its predecessor. The exalted reputation of Dune rested on two things. First, the astonishing manner in which it tied theme to gameplay with a minimum of fuss: the six asymmetric factions in the game worked and acted as you’d expect from the book and each play of the game felt like a grand re-telling of the nefarious political and military machinations of the book, but without ever seeming like it scripted the players into certain paths and with no more than a few pages of rules. The second was its extraordinary mechanics in which very little was random and nothing was hidden from all the players: everyone was allowed access to something that other people didn’t know. It that way it was very much in the vein of the carefully balanced, non-random, tight designs of modern European games, except this was the US of 20 years ago, and in a vicious conquest game that took 3-5 hours to play.

Personally, I had mixed feelings about Dune. Admired from a distance it was a hugely impressive design. At the coalface, though, I found that the game seemed fiendishly calculated to induce galloping paranoia in the players. The piecemeal nature of information sharing left you continually wondering who knew what. The bidding round, which saw everyone participating in an auction for face-down cards that might be useless or game-winners or anything inbetween, and only one player knew what each one was. The combat mechanic, where the belligerents secretly dialled the losses they were willing to take, added hidden attack and defence cards and hidden leaders, with winner wiping out the opposition. I found the glimmers of half-reliable information added up to a situation where I was almost paralysed by indecision, and the anxiety induced by the game went from beyond pleasantly tense to borderline unbearable. 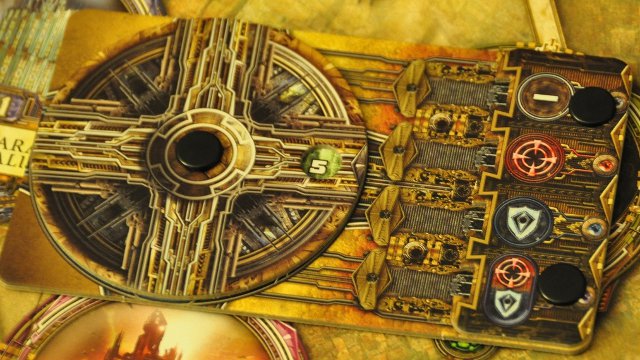 There’s also an unfortunate side effect to inserting economic and material aspects to a game that rests on Diplomacy-like negotiation between players. Namely, that the resulting alliance discussions can become lengthy and their implementation revolve around complex contractual arrangements. Different groups ended up with differing levels of details for these arrangements, but it always seemed to be an issue to some degree. I found these quickly became tedious and annoying, as I would rather have a game based more heavily around clever strategies than contractual small print.

But while it wasn’t entirely to my taste, there’s no denying that the wheeler-dealing and paranoid nature of Dune play was a near-perfect realisation of the machiavellian politics of the original books. And here, finally, we get to talk about Rex. Because of the theme shift, a generation of gamers who get to play this, and not Dune, are going to miss out on possibly one of the very best intermarriages of theme and mechanics in the entire history of board gaming. Everything has changed in Rex: factions have different names, slightly different powers, the board is fairly seriously different. The designers have struggled valiantly to manage the transition from Dune to the Twilight Imperium universe, but aspects of it grate badly. Why does collection of the games’ intangible currency of “influence”, for example, depend on the physical number of troops you have in an area? Makes sense with the original currency of spice, but with influence, not so much. Aficionados of Herbert’s universe are going to be disappointed with Rex, but that was always going to be the case. More unfortunate is that the partly-pasted theme detracts slightly from the pleasure and immersion of play generally.

However, the decoupling from the Dune universe also meant that the designers had more leeway to tinker with the mechanics of the game. Much has been made of the major changes, such as players now moving troops before paying to land more soldiers on the board whereas in Dune you landed before moving. That makes a difference to strategy, sure, but it’s actually a knock on requirement from some other smaller changes in the game. And it’s buried within those smaller changes that, for me, the most important alterations lie, alterations that might not have made sense if there was still an overwhelming need to include a theme of political plotting and double-dealing. Like the fact that all the useless cards got removed so that while there’s still a significant power variable in what’s on offer, your money is never wasted. Or that secret dealing or writing stuff down is no longer allowed. It’s a curious one, that, because seeing it spelled out in that fashion is very unusual, and therefore one might think that it was critical to the play, and yet gamers everywhere seem to be ignoring it and allowing the game to run like Dune. 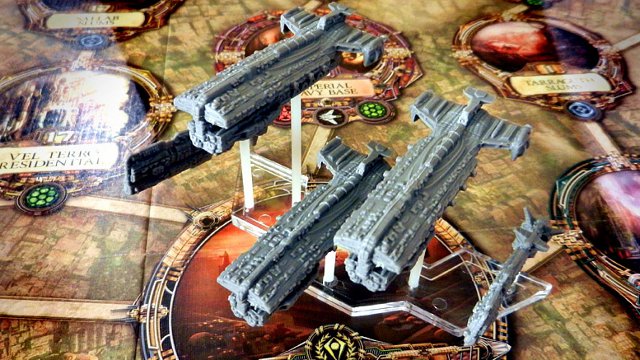 That is, in my opinion, a serious mistake. This isn’t Dune, but out of necessity a different game based on similar mechanics. It’s Rex. And without useless cards in the deck, the horrible anxiety of the bidding is lessened. Without the secret deals, and the ability to write out contractual details, the problem of overly-complex alliance terms falls away and with it some of that unbearable paranoia. And alongside that, the game plays much faster and more smoothly. Indeed, judging from other changes, I think that play speed a key difference between the two and an important design goal for Rex. There’s more currency in Rex, and stuff costs less, so people get more troops on the board, quicker. The board is smaller and troops move faster, so battles come earlier in the game and are more frequent. There are less rounds, so players feel forced to try and make decisive moves in a timely manner. This, with experience and played by the rules as written, is a 2-3 hour game rather than a 3-5 hour one. And that makes a big difference.

Simply put, Fantasy Flight have effectively Eurofied Dune. It’s shorter, tighter, more accessible than the original and the focus is more on leveraging its cool mechanics than on the details of inter-player negotiation. It’s not a Euro, of course, as there’s still a lot of diplomacy, a lot of backstabbing and lots and lots of violent confrontation, but it’s recast the old game firmly in the mold of modern design paradigms. They’ve even marginally improved the ability to play with less than six, a notorious problem with the original, although six are still required to get the most out of the game. And for my money, in modernising it, the mechanical play of the game has actually been improved. It’s just a shame that the wonderful theme had to be sacrificed along the way to get there.

Ultimately it’s a trade off. What Rex loses in terms of thematic integration and charm, it gains in playability. How much that’s going to bother you, and whether it’s sufficient to make you want to put in the money and time required to buy or make a copy of the original is a choice for the individual gamer. Personally, I still find the intensely neurotic quality and predictive aspects of play a little too much, although it’s better in Rex than in the original. But what’s undeniable is that the core mechanics remain utterly, compellingly unique in the genre of dudes on a map gaming, and you owe it to yourself to try them, even if you don’t buy them, in whatever form you feel best suits.