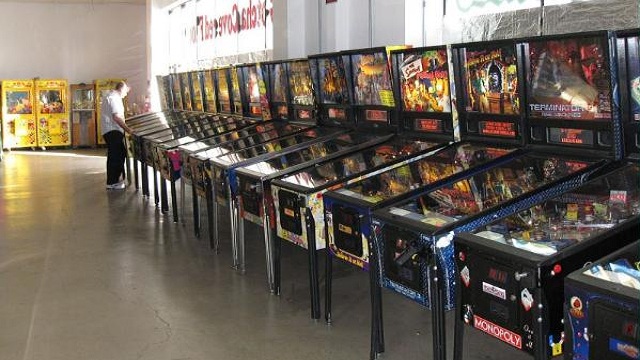 I am not a connoisseur of pinball. I can’t recite the history of great tables from the 60s through to the present day or tell you why one table or another is particularly legendary. But that said, I’ve certainly played my share, be it the racing themed machine in the basement of my childhood home (I no longer remember its name), or the steady stream of tables at the bowling alley my dad took me to every Saturday morning, which ranged from Funhouse to Dr. Dude to T2, or the plethora of tables that put in an appearance at the local arcade – Pinbot, Elvira, Star Wars, Twilight Zone and several more I don’t really remember. My favorite pinball machine of them all was the one located in the basement of the student union where I attended Western Michigan University during the mid 90s – Star Trek: The Next Generation. I was good at it too. At least I think I was. I could plug in a quarter and knock that ball around for a good long while.

As I discovered during my trip to the Las Vegas Pinball Museum, if I ever really was good at that game, or pinball in general, I’m certainly not anymore…

I should blame my reflexes for the degradation of whatever skill I did have, or maybe the fact that I’ve not played pinball regularly for 15 years. It’s much more fun, however, to blame Zen Pinball. I’ve written favorably about Zen Pinball on more than one occasion over the past year – both the XBLA and iOS versions. In fact I dumped a good hour of my flight to Vegas into the Captain America table on my iPad. I knew it wasn’t a dead-on balls accurate simulation of the real thing, but I always gave it credit for being reasonably close. It’s amazing how easy it is to forget what real pinball is like. And just how far off the mark the iOS version of Zen Pinball actually is.

It’s been too long since I last played the XBLA version to say this fairly, but in the iOS version the ball is much too light. It’s far too stuck to the table. And the almost instantaneous power of the flippers are absolutely nothing like the unreliable, almost soft flipping, mechanics of the real thing. I’m not sure I’ll look at that game the same way again. In fact, I just picked up the much more authentic feeling Pinball Arcade from the App Store. I haven’t played around with it much so far, but it’s notably more authentic feeling than Zen (and not just because it re-creates actual tables).

Back to the museum.

When some friends and I walked into The Pinball Museum it was a unique feeling; the sort of feeling you get when you cross through the gates of an amusement park for the first time, or catch your first glimpse of the main floor at E3. This is the only approximation I can think of…

The mind reels as it contemplate the very notion that a place such as this could exist. 10,000 square feet loaded to the gills, almost exclusively, with pinball machines of every possible stripe. New. Old. Conventional. Experimental. There’s a machine there, called Pinball Circus, that’s one of only three in existence. It wasn’t my cup of tea, but it was cool to see nonetheless. I spent my first twenty minutes there just walking up and down every single aisle, taking it all in. There was nostalgia from seeing old favorites that I’d long forgotten playing, curiosity about an era of machines I’d never seen or played, wonder over some of the modern machines that have been produced over the last few years that you won’t find at the local arcade (because there aren’t any more local arcades of any consequence for pinball fans).

By the time I was finished touring I was ready to spend hours pumping quarters into as many machines as I could. Ten bucks in quarters ought to do the trick, especially if I stuck to the less expensive machines from before 2000 (the newer machines cost upwards of 75 cents a play depending on how many credits you put in for at a time; the “older” stuff was typically.50 or three plays for a buck). It’ll be the best value versus time bet I can make in Vegas! I played Pinbot. I tucked quarters into the slots of Black Knight 2000. Funhouse wasn’t working, but I got in time with T2 and Addam’s Family. All the while I eyed the Star Trek: TNG machine, which seemed to always have somebody there playing it already. About 45 minutes later I was down to my last dollar in quarters.

Wait. There was a time when that kind of money (even at 50 cents a play) would have lasted me an entire afternoon. I flailed wildly as the balls went down the middle. I inadvertently set off the tilt trying to keep balls out of the gutters. I would fire off flippers too soon for the shot I was aiming to hit or stare helplessly as a ball rocketed with unexpected speed down a flipper and would already be in the drain by the time I snapped free from paralysis long enough to actually press the flipper button.

What happened to me? I used to be able to do this, dammit! I glanced at the four quarters in my hand and then up where the TNG machine rested, no one in front of it. If there was any pinball game for which I could get my money’s worth in this place it would be that one. I remember taking on its “quests” by the bushel, usually knocking out a couple of them on one ball. Sometimes more if I had a good run. Warp Factor 4. Shuttle rescue challenge. We have engaged the Borg. 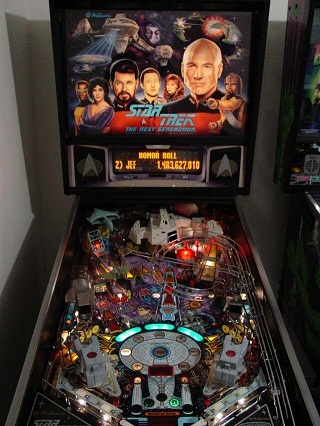 In went the quarters. Three plays of three balls each.

That first game may have lasted a grand total of five minutes. The second one was better. It might have been ten. Maybe I was getting my feel back. The third game was shorter than the first. And just like that, it was over.

I’d love to blame the crappy physics of Zen Pinball, for warping my idea of what that shiny sphere can do as it jets from bumper to flipper to ramp to gutter, and I’m sure there’s an elements of that to it, but the truth is the harmony that once existed between my hands and eyes and brain isn’t what it was. Hello, my name is Todd. I’m 38 and my reflexes are shot. Thanks so much, Pinball Museum, for making that fact plain. Oh, also for being so amazingly awesome and bringing back so many cherished memories. As the T2 machine said as I walked away from it, “I’ll be back.” Next time with more cash in my wallet. It’s still a far better value than anything else you can do in Vegas.