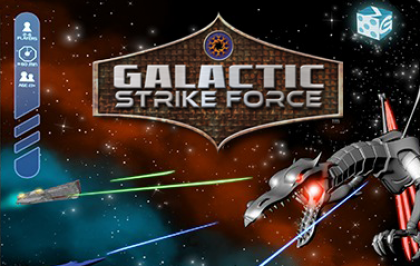 Galactic Strike Fore comes in hot, all guns blazing, with a great-looking science fiction style and a cool concept. The bad guys seeking galactic dominion in this one aren’t up against some benevolent planetary federation or other official Organization of Good Guys United for the Common Good. They are fighting for control of a galaxy defended chiefly by a ragtag bunch of anti-heroic scoundrels, pirates, freelancers and other spacefaring riff-raff. Han Solo types, if Han Solo were a Neo-Elf or a Techno Dwarf. While you’re at it, maybe imagine that the Millennium Falcon is a giant cellular mass with tentacles that fights a Laser Dragon.

You and up to five teammates will pilot your ships between three different sectors, playing credit-generating cards from your unique deck to purchase upgrades from three Station decks in each location. These might increase your weaponry or your shields (collectively these numbers indicate your ship’s energy vis a vis its health) or they may provide other benefits. Then you’ll face off with the opposition, engaging with an opposition ship in the area and possibly calling on your allies to join the battle as a secondary engager, imparting a special combat ability and possibly turning the tide with a little teamwork. If any opposition ships are unengaged, they actually flip the ship-upgrading Station cards over, not only denying you that equipment but also giving the bad guys benefits and possibly even adding more ships to the sector. If they manage to flip three Station cards in a sector, it is overrun and that’s bad news for the good guys. It’s up to your gang to keep the sectors under control while building strength to defeat a boss ship.

And that is the new game from Christopher Badell and the gang at Greater Than Games, whom you may remember as the folks behind the popular Sentinels of the Multiverse superhero game. Fans of that title will be pleased to discover that most of that game’s best design elements make a curtain call in Galactic Strike Force and to some degree it feels like a bigger, more ambitious sequel despite the shift in genre and greater complexity. It feels like a more confident design, but with that confidence comes a sense of sprawl that threatens to bury the experience under piles of markers, tiny card text describing conditional effects and administration that too often interferes with the excitement this game is capable of generating.

I loved the modularity of Sentinels, where there were so many ingredients that could be modified in a given session. Number of players, which heroes the players took, who the villain was and where the battle was going down all could be mixed and matched for a wide variety of experiences. It isn’t necessarily a design issue, but this kind of pick-and-mix setup naturally leads to highly volatile gameplay where balance is out the window and you could lose due to a combination of bad card draws (originating both from the hero decks as well as the villain decks) and by simply not having the right character or characters on the table to handle a particular situation. Or it could be a total cakewalk. Galactic Strike Force’s modularity is just as variable and volatile, and that could be a selling point for many.

Each player picks a ship individually represented by a display card, a starter deck of eight cards and a cardboard standup. Each ship has a unique deck that defines its characteristics and special abilities and yes, as a matter of fact this is something of a deckbuilding game. So there is a wide range of possible ship combinations for two to six players right there. Then there are three randomly chosen galactic sectors chosen that define where the battle against the Big Bad will take place. Then there’s the selection of the Big Bad, each of which comes with a stack of ship cards and mission cards that provide some storyline and short-term objectives, not to mention a dual-state character card that has different effects when “impending” and when the Big Bad’s ship is actually on the table wreaking havoc.

So the mix-and-match style sets up a unique adventure for your team every game. Unlike Sentinels it seems like “brutally hard” is the default setting for just about any assortment of elements. This is a tough game in both its standard and “elite” modes, but I’m not sure if the challenge is a result of smart design and forcing player choices as it is just amping up the output of random die-or-die situations. The AI is limited to simple algorithms such as “put this card where there are the most ships”. Sometimes the game does an outstanding job of creating a certain arc where you’re just getting hammered at the outset, but eventually your team starts to turn the tide for an endgame where you actually might have a shot at winning. Other times, you’re just getting hammered.

Like Sentinels, when one of your team goes down (which will happen, mark my words) they have some abilities that can be used to continue to contribute to the fight. I really like this idea, but there are times when it almost feels like some of these “grounded” abilities are worth more than having another ship out there. But then again, having a team member down just accelerates a tragic end for the Galaxy. It’s easy to get overwhelmed by Galactic Strike Force, and not just by the mechanics that keep the opposition in your face for the whole game.

Undoubtedly, knowing every card in the game- including every ship, upgrade, mission and so forth- along with play experience will result in players having a better success rate. The question is whether it’s worth it to dig in to Galactic Strike Force like that. I like so much of what this game is attempting, including the novel setup and the almost FTL-like sense of developing your ship over the course of the game to hurl it against impossible odds. But I am just not having as much fun with the game as I would like.

Going back to the Sentinels comparison once again, one of the chief issues is an administrative one. Sentinels had players juggling modifiers, damage types and other effects, resulting in low-level math and futzing around with counters (at least in the second edition, the original didn’t even have any). Galactic Strike Force takes this to a new level. There are something like four counter sheets of numerical weaponry and shield markers. Your ship card gets some. Every upgrade you install to a ship gets a few. Every opposition ship gets some of both. Looking at this game on the table, you see a mass of counters and cards which make this relatively simple game look like a burden to play. It doesn’t help that the rulebook is strangely obtuse and not particularly clear about some aspects of gameplay and some elements, such as splitting ship energy between two values but referring to them as one, aren’t very intuitive.

Then there are the cards themselves, most with tiny type describing effects. Most players with reasonable eyesight won’t be able to read anything on them across a table, let alone upside down. Expect to pass cards around so everyone can read them, and then hope that everyone remembers what all nine available Station cards do at a given time as well as the effect of every opposition card, any Mission cards that are on the table and what the enemy boss does.

And then there is the turn structure, which feels overly complicated. I like that much of what goes down on a turn can actually be done simultaneously by all players, which reduces downtime, but the game still feels cumbersome. During each step of the five phase turn, you’ve got to check every card on the table to see if there is an effect keyed to that particular phase. Both good guy and bad guy cards might have these. With three or four players at the table, the eyes of the group certainly help but it’s still a tedious administrative step. In comparison, it isn’t much more complicated than managing something like Arkham Horror so if your group can manage that without grumbling or disconnecting from the narrative then it may not be as major an issue as it is for me and my friends. There’s just a lot to keep track of in general and you’re going to miss something important at some point. Expect several “oh wait” and “hang on, we skipped this part” moments.

Galactic Strike Force comes across as a game that I want to love despite its missteps. I like so much of the design, and I am happy to see some of the best things from Sentinels ported over but I’m disappointed that some of the not-so-good things from that game also came across and somehow mutated into larger problems. I think the narrative of this game is spot- on, with a great concept and lots of unique ships, characters and equipment in the against-the-odds battles it depicts but I’m finding myself pushed away from the appealing qualities. There is definitely a good game here- and a lot of it- that just needs to be streamlined and refined so that players are focusing on the drama and tension rather than what card does what when. An IOS app of this game could potentially be amazing. A second edition with refinements could potentially be as popular as Sentinels has become.