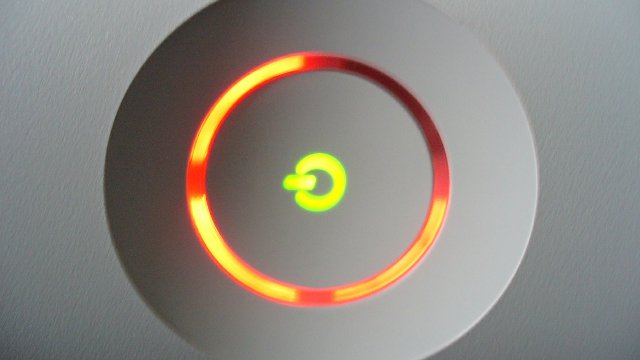 Over the weekend, I became the proud owner of an aged but functional Xbox 360 Arcade with an attached 20GB hard drive. It didn’t come with any games though, and it being a bank holiday weekend here in the UK all the used games shops were closed, so I had to resort to XBLA to get my first taste of gaming goodness. Going to hit the charity shops with a vengeance this lunchtime though. But here’s a short list of unexpected things that I discovered as a used console owner.

Being enthusiastic, I made the gross error of setting up my XBLA account *before* I set up the console. It then took me half an hour to actually sign on to Xbox live, because every time I tried to enter my email and password, the machine told me those details were already matched to an existing GamerTag. I tried changing my profile name, deleting the old profiles on the machine, searching the online help and menus, each and every time having to tediously re-enter my long email address and password without a keyboard all to no avail until I discovered, quite by chance, that if you already have a profile you have to download it first. Am I the only person who found this “feature” to be idiotically well-hidden?

As I said I had to get my first games from XBLA. There were three that interested me: Braid, Limbo and Trials Evolution which would come to a grand total of 3200 “points” if I wanted them all. Can I buy 3200 point? Not if I want to get a discount on RRP and buy them in blocks from cards, no. This is so screamingly, obviously a ploy to force people to overspend and then use the excess to engage with other parts of the Microsoft shop to buy mp3’s and such that I’m amazed there hasn’t been more of an outcry about it. I think it’s absolutely disgusting and I’ll be doing my damnedest to try and make up round numbers from promotions and freebies where I can find them. Although I note that the Bing Rewards scheme is arbitrarily only available in the US and therefore closed to me, so way to go to alienate a substantial chunk of your user base, Microsoft. Also, I found it extraordinary that the critically acclaimed Braid, an XBLA game from 2008 will cost me approximately £8 in points, whereas the copy of the critically acclaimed Fallout 3 from 2008 that I secured on Ebay cost me £4 including P&P. No bloody wonder manufacturers are keen to squash the second hand games market: this isn’t just about stopping used sales, it’s about encouraging downloads and locking down the means of distribution at which point you have an effective monopoly and can charge what the hell you like.

I still have an old cathode ray set. I have never seen the point of HDTV: I have friends that have it, and I’ve seen it demoed in shops and it really hasn’t looked all that much better than SDTV to me, especially when you factor in that the vast majority of broadcasts in the UK are still in SD and that they look marginally inferior when viewed on an HD set due to having to be processed through scaling software. As far as consoles go I stupidly thought the same would apply, especially since I’ve seen adverts for games on the TV that looked okay. But the minute I loaded up a game to play, I could see what the problem was: horrible fuzzy edges everywhere. I’m perplexed as to why I perceive this problem so much more in computer graphics than actual TV transmissions but for now I’m just encouraging my kids to throw heavy objects at the screen in the hope the insurance will cover a new one.

I picked this console up because it was a bargain. And then promptly spent £30 on XBLA points and used games from Ebay, and that barely scratches the surface of what I want to play. Now I’m thinking I need a new memory stick and a bigger hard drive. And I’m tempted to buy The Witcher 2 even though it’s new and can only be had for near full price because it sounds awesome. My six-year old daughter would absolutely love Kinect. Oh, and Brandon told me about this handy-sounding recharge kit for the controllers. And at some point someone is going to challenge me to some online gaming and then I’ll need to upgrade to Gold. So I’ve gone from from trying to economise to spending tons of money, all because I managed to pick up a bargain. How the hell does that work?

So that’s my weekend in a nutshell. The first game I spent those points on is Trials Evolution – might post a review next week as it hasn’t had much coverage round here, and it’s totally not what I was expecting when I downloaded it.