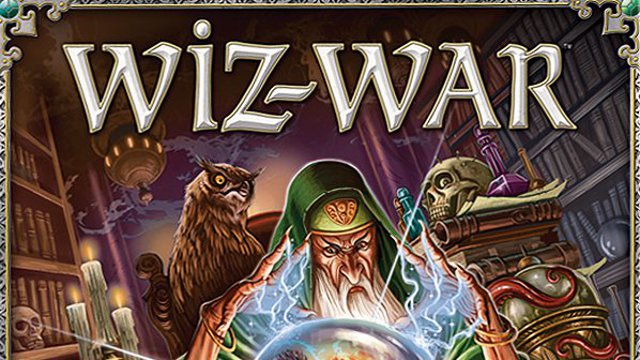 If there is genuinely a board game version of development hell, as distinct from the normal travails designers have to go through trying to get a publisher to notice their games, then Wiz-War deserves the award for the longest time spent therein. Originally published in 1985 and much beloved of the early Dungeons & Dragons crowd it went through seven editions before ending up, rather oddly, with dice manufacturer Chessex who promptly sat on the license for 15 years before handing it over to Fantasy Flight Games to release an 8th edition of the game. Shockingly, as someone who was playing board games back in the late 80’s, I never played the original but thankfully Fantasy Flight sent me a review copy so I could finally get the chance to experience this seminal title.

The concept is simple. Each player is a wizard, pitted against one another in some sort of labyrinth where they must gain ascendancy by killing other wizards or stealing their magical treasures or some combination thereof. Wizards have a hand of spell cards which consist not just of out and out attack spells but a very wide variety of magical effects covering such things as altering aspects of the labyrinth, summoning things, buffing, protecting and transforming the wizard and more besides. The range of effects is pretty spectacular and it’s from the unpredictable nature of combining and stacking these effects that the game gets much of its charm. If this reminds you a bit of Magic: the Gathering this is because the designer of that game was heavily inspired by Wiz-War.

Wiz-War has a long history, and a tendency to divide gamers into love it and hate it camps. Those who hate it cite an overwhelming level of randomness from the card draw and an almost complete lack of strategy. The player relationships are free form: you can pick on, ally with, backstab, gang up on and generally interact with whoever you want however you want whenever you want. The victory conditions are easy to achieve and the maze is claustrophobic and restricts interaction in unpredictable ways. The result is that many games are won or lost extremely suddenly thanks simply to being in the right place at the right time with the right card.

The hate it camp is completely right. It is also entirely wrong. 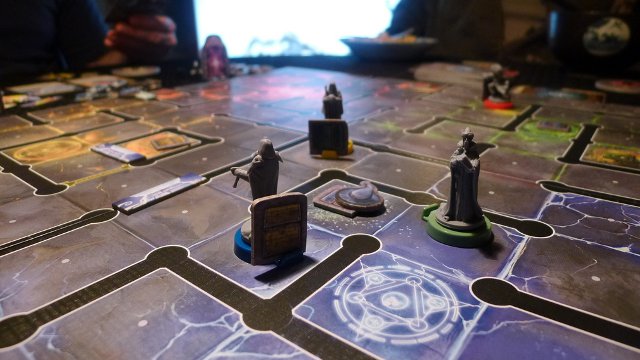 I recently played a four-player game (the maximum it permits) of Wiz-War that lasted 37 minutes including setup and rules explanation time. I’ve never had a game run over an hour and in spite of the heavy card text and occasional need to pause and check the rules to figure out precisely how two card effects interact the game is quick-playing and downtime is minimal. It’s a fast, exciting, thrilling game, fast enough that it would almost qualify as filler material. The fact that the game can deliver a scintillating, ever-shifting and unpredictable landscape of allegiances, grudges and desperate last minute attempts to foil someone on the home straight in this short a time is positively a bonus, not a problem. Yes, by all means whine and complain about 3 hour plus games that reproduce this effect and I’ll gladly join in. But this is a sixty-minute game and it’s the perfect place to experience and enjoy the wide gamut of interaction allowed by free-form negotiation that often becomes incredibly tedious in a longer game. You might prefer challenging, logical games with perfect mathematical solutions but for the sake of variety, for the sake of your humanity, you owe it to yourself once in a while to let your hair down and actually interact with your opponents. Wiz-War is the perfect place to do it, cramming virtually every possibility into the smallest possible package.

And whilst it’s entirely true to say that ultimately there is very little strategy to the game, trying to claim it has no meaningful decisions is entirely false. Every turn the seven or so cards you have in your hand combined with your three squares of movement stack up to a mind-boggling array of creative possibilities. Simply waltzing round a corner and power-thrusting a startled wizard is a sign of the terminally unimaginative. In games I have found myself boxed into a corner through a truly fiendish combination of create wall and stone block spells. I have crowed with delight as I have forced another wizard to repeatedly walk in and out of yet another wizards’ thorn bush. I have watched in amazement as a wizard projected themselves across a corridor and bounced a lightning bolt back and forth between the two walls, electrocuting the poor unfortunate in the middle. I have bathed in acid, turned into a pile of goo, eaten walls, reversed gravity, punched people to death with my bare hands and many other things that would make even Gandalf and Harry Potter stand agog.

The endless card combinations together with Fantasy Flights’ innovation of combining spells with the energy needed to power them into dual-use cards where you choose one effect or the other mean the game is packed with creative tactical choices making every round a fun, fascinating puzzle to explore. No, in the end all your creativity and skill might not matter one jot in determining who wins, but it will keep you in the running for a bit longer and it will be tremendously entertaining. I once pointed out that I’d delight in Twilight Struggle even if the game were horribly unbalanced and largely random (Twilight Struggle is neither of those things) because trying to work through all the possible card effects was so engaging. It’s the same here, on a smaller scale. Who cares who wins when it’s just so much fun to try? This is the magic behind how it works 2-player in a straight fight to the death. It’s not as much fun as 3 or 4, but it’s plenty fun enough. 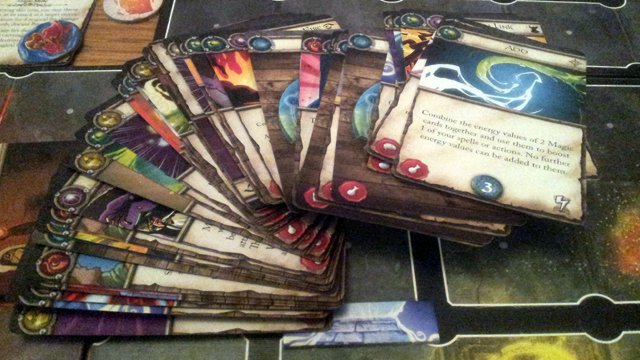 Aside from combining spells and energy on the same cards, Fantasy Flight offer a variety of other innovations to old fans of the game. The most notable is the division of the spell deck into schools of magic, allowing you to pick school (and thus card) combinations you like and ignore ones you don’t. It also has the effect of focusing card types together, ensuring for example that if there are Create Wall spells in the deck, there will also be Destroy Wall spells and a higher chance you’ll get the latter to respond to the former with thanks to the thinner deck. But pretty much all the changes that Fantasy Flight made – and they’re mostly improvements in my opinion – can be reversed by old-school players thanks to an optional rules set that can configure the game back to its original state.

The publishers have also taken the opportunity to tighten and clarify the rules leading to less confusion over the plethora of possible interlocking spell effects. There’s still some, sure, but they’re minor and can usually be decided in a “sensible” way with the agreement of all the players. Of course this reprint also has the legendary Fantasy Flight production quality with cool plastic sculpts and fine art – I particularly like the fact that the wizards in most of the illustrations on the cards actually look like the wizard miniatures, a nice attention to detail. I originally turned my nose up a bit at the space-age boards but they look fantastic in the flesh, mystical chambers crackling with fluorescent magical energies. It’s great quality stuff for the relatively reasonable asking price.

I love Wiz-War. It’s an unbelievable, outrageous distillation of everything that’s great about multi-player conflict games, take-that card games and fantasy adventure titles into an incredibly heady brew. If I have one black mark against the game its simply that they left out some old fan favourite spells such as Buddy and Amplify and my own personal favourite group of spells that allows you to summon minions, lord it over them and send them to attack your enemies. It’s simply less of a game that you don’t get the chance to be a gloating necromancer. But it’s clear from the rules and spell descriptions that many of the missing effects have been planned for, so hopefully an expansion pack is in the works to rectify this. And in the meantime I’m still going to be trash-talking and smacking down my would-be competitor mages over and over again. I mentioned earlier this is short enough for filler and so it is: but the fact of the matter is that so far it’s never been used as filler because one game to start a session has inevitably lead to it dominating the table for the whole time. Too much, it seems, is never enough.