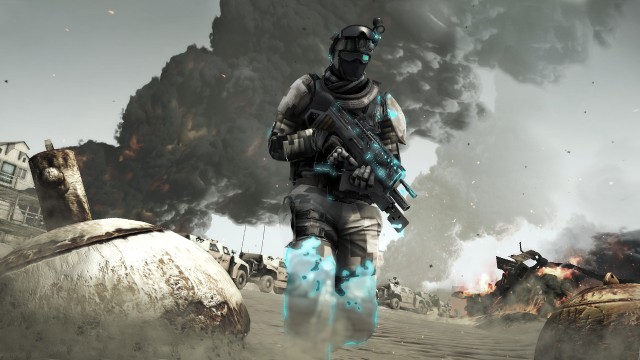 One of the things that really strikes me the most about Tom Clancy’s Ghost Recon: Future Soldier isn’t that the gameplay is extremely slick and streamlined without ever feeling “dumbed down”, to use the term forumistas and Metacritic user reviewers often deploy to erroneously describe games that are slick and streamlined. It’s that its action is extraordinarily well-framed, well-executed and unusually well-filmed. The pitch is that you’ve got four sets of boots on the ground for some third-person shooter action with a light (and appealing) overlay of gadgetry and tactics. But it’s evident that there’s a fifth man among the Ghosts- a cameraman.

Sure, the fingerprints of Call of Duty are all over the game- the requisite Bayisms, tough guy talk about intel and stuff, and those magnificent men and their shooting machines. But whereas other military shooters aspire to be like action movies with setpieces, cutscenes, and rail sequences bookended by hallway shooting galleries, this edition of Ghost Recon uses some subtle and extremely cinematic techniques to create a visceral, seamless “you are there” sense of verite. While playing through the first three missions of the game, I kept thinking that the game really has a sense of geography, space, time, and distance. I came to realize that it was because once you’re in action, everything is very nearly shot (photographically) in a single, unedited take from start to mission end.

You’ll be over the shoulder of your soldier running cover-to-cover one minute under fire, the next the camera will pan around for a scene where you rescue a CIA operative. The perspective never changes or cuts away from this phantom fifth member, the cameraman. The camera pans back around, and you’re Oscar Mike again. It’s a brilliantly employed technique working in concert with simulated handheld “shakycam” and even overused gimmicks like the ol’ dirt-on-the-lens trick sell the illusion remarkably.

Yet it’s not strictly a filmic style. It’s near future, so there’s this cool augmented reality information overlay and virtual HUD that halos everything. Much like in last year’s Tom Clancy title, Splinter Cell: Conviction, giant words appear in the environment to tell you where you are or what you’re doing. It’s a neat, stylized effect. I get the idea that the game is showing the players what the Ghosts see in their super duper future googles, but since this is a third person game with such a strong sense of camera, these augmented reality effects could only be occurring in that phantom camera.

Another cinematic quality that keeps impressing me over and over again is how extremely well-scripted the missions in this game are. There’s a real sense of pacing, drama, crescendo, and aftermath. You’ll be creeping along in optical camo (octocamo?), tossing a pilotable UAV drone to mark targets and enabling a one-button command to your team to perform a simultaneous takedown.  It’s deliberate, methodical, and quiet. But then it all goes pear-shaped. Somebody saw one of those bodies you just made, and the next thing you know you’re ducking behind a crumbling concrete wall under fire from a machine gun mounted on a light truck. Shootouts are intense, over quickly, and feel appropriately dangerous. Civilians hit the deck. Watermelons in the fruit stand explode in vivid washes of red. Then it’s quiet again. 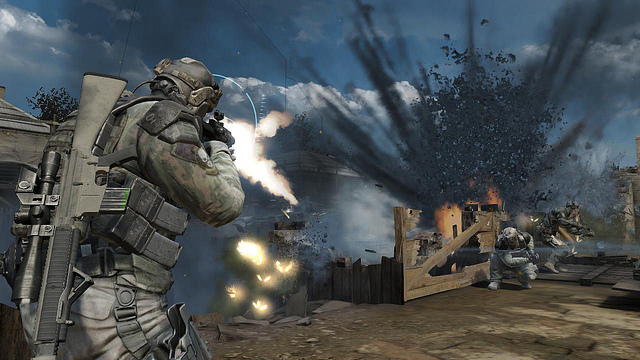 This game also uses on-rails sequences with heavy scripting, but in such a way that I actually like them. There’s been a couple of exfiltration goals where the character has to drag a VIP through heavy fire to a checkpoint. It’s you, the guy you’re dragging, and a pistol. Bad guys (who come in both brown and American varieties this time, in what must be a new trend) pop out. And you actually kind of feel like a bad ass popping them, not like you’re playing Hogan’s Alley. They’re integrated perfectly into the action of the narrative, creating tension. I haven’t seen a turret sequence yet. I hope that I don’t.

The quality of seamless cinematic visual technique along with this sense of rising and falling action are examples of the things that really distinguish the title from falling into the me-too military shooter trap. It hits all of the genre touchpoints- including some of the more clichéd or overused ones- but its style and the quality of the gameplay set this one apart. The gunplay is great, the cover system is as good as any I’ve ever seen, the stealth works, the gadgets are fun, and the team AI actually isn’t atrocious. There’s a lot going for this game, even in its single player offering which is supposedly a good 10-12 hour event. The multiplayer is good, but you lose some of the interesting film-like qualities of the single player game.

The single player story sucks, though- it’s not even trash action movie bad. It’s vague and empty. You do, like, special forces stuff. And there’s intel. Always intel. For some reason you have to go to Bolivia, shown on a science fiction map with cool fonts. And there’s hostiles!  As for the characters, who knows?  I can’t even remember the lead’s name and they say it every time you die. There’s a scene early on where they’re sitting in a bunk talking about car parts and listening to white trash nu-metal, but that hardly makes these soldiers real people. They may as well be commando raccoons, and the missions arcade game levels. I’m actually kind of OK with that, because the focus is on the gameplay rather than a Z-grade Hollywood script that I would likely care nothing about. It’s ironic that the game uses filmic techniques so well but pulls up well before it turns into another would-be interactive action movie. It stays a video game, and I appreciate its honesty.