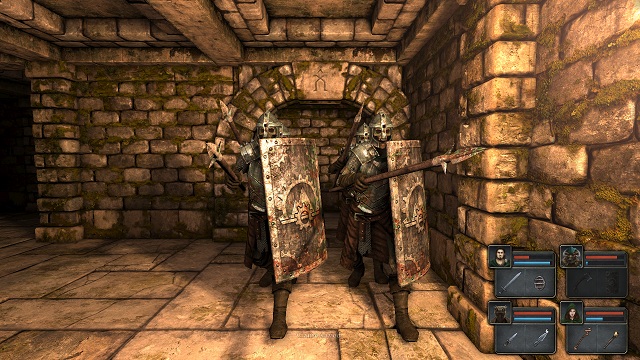 It’s been one of those times of late where I’ve not had much bandwidth for gaming, but those few hours I’ve been able to sit down in front of my trusty PC and whack something over the head have gone to Almost Human’s Legend of Grimrock. (Or as Transformers fans keep calling it, Grimlock.) You’ve probably read up some on this already, but for those living under a rock (a grim one, perhaps), this is a throwback game to the days of Eye of the Beholder and Dungeon Master, two games I hold in much affection, though I only got to play the latter for a few hours on a friend’s Amiga. (Oh the glory days.) Your user-created party of four is thrown into a dungeon and must hack apart beasties to survive. You move one “square” of distance at a time and can only turn in 90 degree increments. It’s about as old as old school gets from a design perspective. What’s surprising is just how well the formula works when given a notable graphical makeover.

The key aspect to understand about Grimrock isn’t that it’s a throwback design or that it uses fairly simplistic controls. What’s proving to make this game special is that it’s ultimately a shockingly well-executed blend of simple gameplay concepts and thoughtfully challenging world design. It is an easy game to pick up and play, and the surprisingly brief tutorial is more than enough to get you started, but from there it immerses you slowly, but deliberately, into a series of increasingly difficult obstacles to overcome as you navigate its morass of labyrinthine dungeons.

As your merry band of humans, lizards, minotaurs, or insectoids moves forward you graduate from a very simple “push this subtly hidden button to open the secret door” or “find that key to open the gate,” to ever more complex puzzles comprised of said buttons, pressure plates, teleporters and more. I’ve only delved as far as level four of Grimrock, but already, I’ve found myself on multiple occasions having to step back and look around a room to really digest every part of it in order to find a path forward. In an example from an encounter last night I entered a large room that featured a handful of individual cells. At the far end was a locked door. There was no key hole and the only buttons I could find served to control the gates for the cells. The cells themselves all had pressure plates on them, but unlike many plates in the game, simply resting an object on them didn’t activate them. As I traipsed about, it was soon noteworthy that the room continually would spawn a handful of skeleton enemies. Respawning was not something I’d seen the game do up to that point. The solution wasn’t to defeat the skeletons but to lure them into and then lock them in each holding cell. Once I figured that out, the locked door opened and I could proceed.

It’s all rather Portal-esque in this regard because the challenge becomes about seeing the “whole board” (as chess players like to say). You either feel brilliant for picking up on the clues the game offers you or like an idiot as you scurry to the web to find an answer. If you don’t like getting stuck, this is probably not your game. 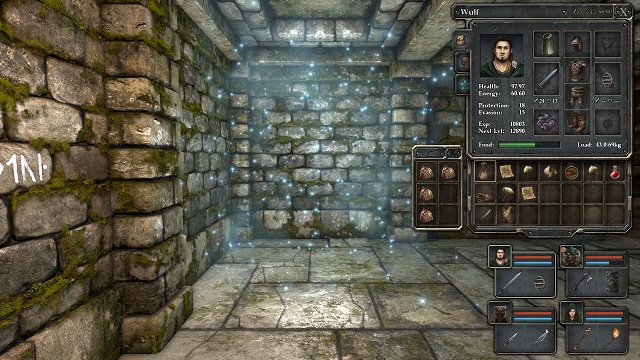 The other big component to the game, of course, is the combat. Your group (not that you ever see them on the map) is arrayed in two rows of two. Only your front row of adventurers can attack with standard melee weapons. For your back row members you need missile weapons, magic, or reach weapons like spears. There’s a skill for the rogue class (the other classes are fighter and mage) that lets them attack regardless of party placement, but it will take a few hours of adventuring to acquire it. Really, this is a thinking person’s combat model as opposed to a twitch game. You click a weapon in your character’s hand to swing it and then there’s a cooldown timer before that character can attack again. There’s no need to be fast with the mouse. Instead you have to think about the layout of the room you’re in and how you can effectively attack and move in order to minimize the amount of damage you take. Make no mistake, if you try to stand toe to toe with a group of four skeletons featuring spears and extremely fast attacks, you’re not going to last long. And the spiders… good god, don’t get me started on the goddamn spiders. I’ve said it before and I’ll say it again, it’s time to retire these nightmares from the beastiary. Come on guys. Do it for me. You need no other reason.

Another nice piece of design are the magic and health systems. You cast mage spells by clicking different combinations of runes to create spell effects. The game starts you off with zero spell knowledge. If you can accidentally stumble into a rune combo that creates a spell effect, the game will let you know, but you’re ultimately dependent on finding scrolls to teach you what spells to cast. What it doesn’t do, however, is give you permanent memory of the spells. You either have to memorize the rune combinations or hold onto the scroll so you can refresh your memory as needed. It’s another cool mind challenge, having to remember how to cast spells or dedicate precious inventory space to keeping a record. (You could always write it all down on paper, I suppose, but come on. Be a real gamer.) The only in-game restriction on spell casting is the number of spells your mage is allowed to know, which is based how many points you’ve put into various mage skills. Potion-making works in much the same way. You’ll find recipes as you progress that let you make healing potions, energy potions, etc., but you either have to hold on to the recipe or memorize the ingredients.

The question of what kind of legs the game has, I admit, is still up in the air at this point. I thoroughly enjoy the gameplay and love the way it forces you to think through your strategy with a very smart and fair learning curve. The dungeon layouts themselves are also a huge plus. This is not a progress from point A to point B kind of game. You’ll find dead ends. You’ll make wrong turns. In short, you’ll need your map. (You can either have the game produce an annotatable automap or you can go hardcore and do the mapping yourself.) I’ll admit, as much as I’m not progressing particularly quickly through the game, I’m not eager to ditch it to move on to the next bit ‘o shiny. For certain, there are times where having to stop and assess and stop and assess to figure out how to get through a room can get frustrating. It’s a very delicate line, providing players with an ever-increasing challenge without letting it get too frustrating. So far Almost Human hasn’t crossed that line, but they do flirt with it.

If I were a betting man, I’d say it’s unlikely I finish the game, but as long as it remains an enjoyable slog, I’ll continue to chip away at it. This is a must play for gamers who loved games like Eye of the Beholder and the other first-person dungeon-crawlers of yore. For those who missed all that, it’s worth checking out just to see if this sort of game appeals to you. At $15 through GOG, we’re not talking about a high-risk investment. Just remember, the giant spiders don’t mess around.

Note: The 1.1.4 patch did come out this week. You can see the details on it here.

CD Projekt Red held their “Spring Conference” yesterday, which consisted of several Witcher 2 related announcements and a bunch of updates at GOG. (I was rather hoping we’d hear about a new CD Projekt initiative or two, but no such luck.) Here’s the highlights from CD Projekt:

– The Witcher: Enhanced Edition is now available for the Mac (through Steam)
– All Witcher 2 owners get a “complimentary backup copy” of the game on GOG.com (which, of course, means it’s DRM-free). More details here.
– Current Witcher 2 owners can pre-download the Enhanced Edition updates to their PCs on April 11th, six days ahead of the actual release date of April 17th. (You won’t be able to play the EE before the release date, however.)
– There will be a motion comic set in the Witcher universe released, for free, for iOS devices. The comic, “stars witcher Geralt in a perilous situation where the reknowned monster hunter may finally meet his match, fighting a cunning werecat in a battle to the death and where politics may force him to stay his hand.”
– 1,000 copies of Witcher 2 for Xbox will be made available to “enthusiast reviewers.” If you think you’d qualify and want to get in on this action you can find more information here.

On the GOG front, well, those folks have been rather busy:

– For about another 24 hours or so (as of this post), you can add Fallout to your account and download it for free. This offer expires at 23:59 GMT. I’ll let you do the time conversion.
– New “GOG.com Premium Editions” of the original Assassin’s Creed: Director’s Cut and Heroes of Might and Magic V Bundle are now available. You can get them both together until April 19th for 19.99. There’s also, according the to the PR, a full gigabyte of the usual extra GOG goodies included with these games, soundtracks, artbooks, etc. You have to marvel at the prospect of two Ubisoft games showing up on a DRM-free service.
– There’s a pre-order special for the upcoming release of Botanicula, an adventure game from the folks that brought you Machinarium. From now until the game’s release on April 19th, you’ll be able to get it for $8.99.

In light of some of the discontent we’ve been expressing towards the industry this week (well, mostly me), it’s important to point out where the good guys are in this business, and GOG and CD Projekt certainly fit that category. That said, I’m really most interested in a new game going up at GOG next week that went unmentioned: Legends of Grimlock. Party-based RPG for the win!