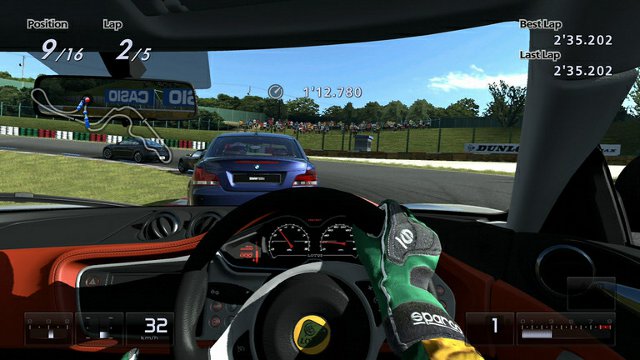 A small thing, this, but I’ve been entertaining a suspicion that stuff like this would start to happen sooner or later for quite some time now. And since it’s from the UK press I thought you might well have missed it across the Atlantic: a twentysomething Grand Turismo addict has used his obsession to actually make the cut as a real life racing driver.

I’m rubbish at racing games, although I greatly enjoy trying to pretend otherwise. I imagine even Mr. Barnes could probably beat me in a race. But one title I’ve never, ever been able to get to grips with is Gran Turismo. I wanted to like it. I could see the charm, the wonderment waiting under the hood for those able to master rear-wheel drive cars, running the racing line and who understood whatever the hell it is that a carburettor does. But I was not one of those chosen few and I eventually gave up the franchise in favour of the rather more user friendly Project Gotham games. I got the feeling then that Gran Turismo was close to a proper simulator, something for the hard-core, a version of Microsoft Flight Simulator for petrolheads and so it was okay for me to utterly rubbish at it, as most people are utterly rubbish at flight sims. This article makes me feel vindicated.

But more interestingly it goes to show just how incredibly realistic home video games have become. Whilst I’ve been waiting to see news reports just like this, I still find it incredible that, as the article points out, running a computer game gives the player enough skill to compensate for the incredibly important things it misses out like real G-force, real car judder and – most importantly of all – the real chance that you might crash and die horribly in an enormous fireball. What does that tell us, I wonder, about computer games and in fact about the sorts of people that play them?