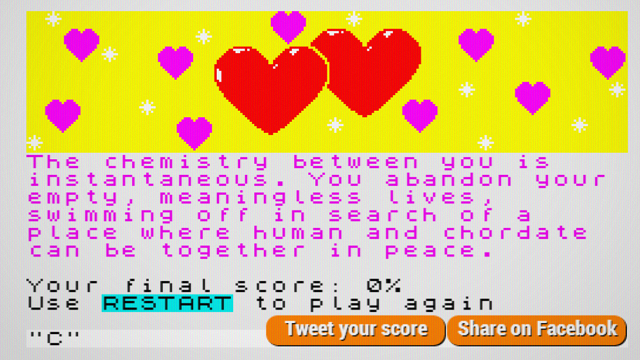 The Special Love of Human and Chordate. You may or may not have seen that Jaws: The Text Adventure has made some, er, waves this past week. It’s worth poking around a bit with your nose and then devouring whole. (You play Jaws. Hence the terrible puns.) I’ll tell you that the genius in this is not in following the path of the movie Jaws. I tried and finished at around 70% score (measured in how full you make your shark). The prize is in seeing what sorts of undocumented commands you can find. The documented commands pretty much consist of N, E, S, W (compass directions) and eat. Most everything else you have to discover for yourself. I think it’s safe to say there is no way for me to top this 0%. The command that produced this wholesome and in no way inappropriate result? While swimming innocently up to the beach I encountered a bather and issued the command: Kiss Woman.

After the break I troll JJ Abrams for his trolling of Star Trek: The Video Game, Steam decides to further complicate life, and GTA V makes bank…

He Knows Not What He Says. This? This is also gold. Possibly even platinum. During an interview with Gamerhub.tv, Star Trek and Star Trek: Into Darkness director J. J. Abrams dishes about the experience of being involved in the making of the unmitigated bomb that was Star Trek: The Video Game (43-rated at Metacritic; 2.3 for user reviews):

“The last game was obviously a big disappointment to me. We were actually involved at the very beginning of it, and then we realized that it was not going in a place where we were going to get what we wanted. So we dropped out and they continued to do it.”

J. J., I feel you, buddy. I really do. This is exactly how I felt during the last 30 minutes of Into Darkness.

Because, Why Not? Amiright? For the past week, Valve has been teasing a trio of new announcements. The second two of which don’t unveil (because, drama!) until after this post goes up, but the first is the reveal of SteamOS. Because between Microsoft, Sony, Google (Android), and Apple, we don’t have enough unique platforms for developers to focus their efforts on. From Valve:

As we’ve been working on bringing Steam to the living room, we’ve come to the conclusion that the environment best suited to delivering value to customers is an operating system built around Steam itself.

Yes, because Steam is so awesome no other operating system can fully contain its true potential!

SteamOS combines the rock-solid architecture of Linux with a gaming experience built for the big screen. It will be available soon as a free stand-alone operating system for living room machines.

Free is good. It’s also the only chance they have of getting developers and hardware manufacturers to support it, but even then, developing for yet another platform requires money and skillsets that may not already be on hand. To make yet another port worth their time, developers will have to believe this new platform has a large audience for whom just buying the Windows version and streaming it (see later in this post) isn’t enough.

In SteamOS, we have achieved significant performance increases in graphics processing, and we’re now targeting audio performance and reductions in input latency at the operating system level. Game developers are already taking advantage of these gains as they target SteamOS for their new releases.

Yes, because the thing keeping my PC games from really maximizing their true potential has been… Windows? I know, I know. I really do. It’s more complicated than that. Yes, yes it is. But my three year old hardware plays everything I throw at it with settings very near the maximum in most cases. How much of a gain are we really going to see because of improvements in efficiency and how big a difference will it really make in games we can actually play? I am excited to be proven wrong about this. I’m also just a little tired of listening to the Gabe Newell freak out about Windows 8 and how it’s a catastrophe for gaming. I’m sorry, but if Windows 7 wasn’t a travesty for gaming, then neither is Windows 8. You can do everything just about exactly the same as you did before. Nothing I’ve tried to run in Windows 8 has failed to work just as well as it did before the walls supposedly came tumbling down. I’m not saying the OS doesn’t have its issues, but it hardly represents the ruination of gaming on the PC. Maybe with Windows 9?

Now, lest you think I’m suddenly a Valve hater (I think my record is pretty clear that I’m not). Here’s some promising stuff:

Steam is not a one-way content broadcast channel, it’s a collaborative many-to-many entertainment platform, in which each participant is a multiplier of the experience for everyone else. With SteamOS, “openness” means that the hardware industry can iterate in the living room at a much faster pace than they’ve been able to. Content creators can connect directly to their customers. Users can alter or replace any part of the software or hardware they want. Gamers are empowered to join in the creation of the games they love. SteamOS will continue to evolve, but will remain an environment designed to foster these kinds of innovation.

I’m not entirely sure I’m following all that, but the point that hardware built around this OS is fluid is a feather in the cap relative to traditional console gaming. Sony goes to their next Playstation. Microsoft goes to their next Xbox. You either upgrade and maintain multiple consoles or you vacate your existing library. A Steam-based platform (*cough*PC*cough*) doesn’t have this issue.

This does address the library issue and not being able to access your current Windows/Mac library on your new SteamOSBox-thingy. I wonder what happens when I launch a game on my PC while Kyle attempts to stream it or another game onto the SteamOS console? Speaking of which…

The living-room is family territory. That’s great, but you don’t want to see your parents’ games in your library. Soon, families will have more control over what titles get seen by whom, and more features to allow everyone in the house to get the most out of their Steam libraries.

This is exactly the sort of flexibility I was talking about last week. Three cheers! Maybe even four. Seriously, this is win.

And then there’s the unknown:

We’re working with many of the media services you know and love. Soon we will begin bringing them online, allowing you to access your favorite music and video with Steam and SteamOS.

I just… I dunno. One of the great frustrations of media/gaming devices these days is that there’s so many platforms it becomes its own little shell game of figuring out which device or TV-connected box supports which app platforms that you actually use. HBO Go, MLB.tv, Netflix, Amazon Instant Watch, Pandora, Spotify, and on and on. Oh, Product X supports A, B, and C, which I care about, but not D and E which are supported on Product Y, but Product Y doesn’t have support for A and B.

I do not enjoy this. I think that, more than anything, is what irks me about Valve trying to build another new platform upon which to build content. It’s just one more potential item for an already crowded ecosystem. Granted, the In-homing Streaming at least ensures access to your full Steam catalog, but frankly, and not to sound like an Xbox One apologist, I want the box connected to my TV to do more than serve up games. If Valve can really support the best and brightest app ecosystem for getting video and music content across SteamOS then bravo. But if history is any guide, that’s a process for any wholly new platform, which this represents. I’m not sure I’m all that interested in buying in early and waiting for Most Anticipated App when there are plenty of mature platforms to choose from that already do support it and I can just keep on keeping on with Windows-based PC games.

The next year, like many before it, promises to be interesting.

Serious Bank. If you trust the numbers coming out of Take Two, Grand Theft Auto 5 has generated $1 billion in sales in it’s first couple days on the market. Billion. With a B. I get that many feel the game is brilliant and I’m not arguing for or against that. But plenty of great games do not approach that kind of number in lifetime sales. GTAV needed 48 hours or so. That’s crazy town.

Still Simming. SimCity continues to pump out expansions. The latest, Cities of Tomorrow, arrives November 12th. Not among the new features? Offline mode.

Going Out With a Yawn. Blizzard is closing its auction house. That sound you can’t hear is millions and millions of people not caring.