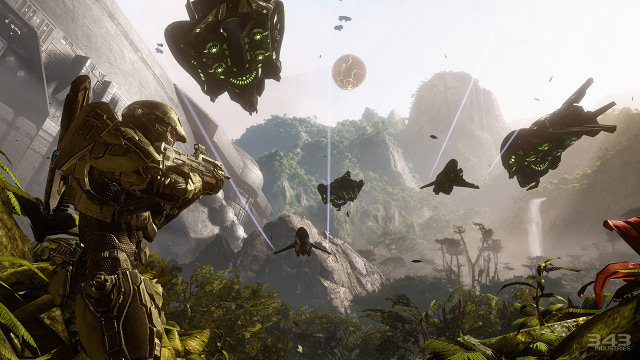 In the interests of picking up the pace a little, I thought that when I didn’t have a proper feature to give you, I might start posting brief thoughts on games I’d been playing that week instead. Not a proper review, you understand, just a quick sketch. First up to the plate is the fourth iteration in the Halo series, appropriately known as Halo 4.

There’s an old adage that runs “if it ‘aint broke, don’t fix it”, which I presume is emblazoned in thirty-foot high fiery letters on the wall of the Halo development office. Because my initial impression of Halo 4 is how very much like the original Halo it is.

Of course as a late-cycle Xbox 360 game it looks amazing compared to its predecessors, and many of the scenes were clearly designed to wow the player. And there are a few new additions – a welcome raft of abilities for your armour and a less welcome portrayal of Cortana as some sort of super-curvy cyber-babe. I’ll be playing it a while yet. But if Microsoft are still seeing Halo exclusives  as a prime selling point for the Xbone, they really ought to do something about shaking up the rapidly ossifying gameplay.