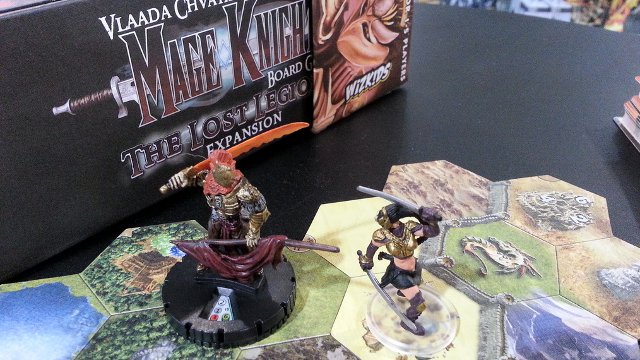 Mage Knight Goldyx felt old and tired. He’d been to Atlantea several times, with comrades and without, but the effort of preparation, the length of the journey and the interminable waiting around for other Mage Knights once there had dulled his taste for adventure. Now he preferred to spend his days playing his magical game-tablet while toasting his feet before a fire.

One day, there was a knock on the door. Unused to company, and with legs stiff from long hours of inactivity, Goldyx irritably called for the visitor to enter. He was unsurprised to see Wolfhawk, newest of his order and about to set forth on her first Atlantean expedition.

Silently he gestured for her to sit on his magnificent copy of the Mage Knight’s collected law and lore, bound in dragon leather, embossed in gold and wrapped about with intricately wrought bronze clasps. Three feet thick and solid as a rock, he now used it for nothing more than a visitors chair.

She took off her full-face helmet and exhaled a sigh of relief. “Gets hot in there” she complained.

Goldyx nodded. “And yet it seems that the armourers have seen fit to leave all the vital organs in your midriff totally exposed” he observed.

“Yes” replied Wolfhawk, frowning slightly. “They said they had nothing else that fitted. But Tovak always seems to walk out with a full suit.”

Goldyx silently recalled that all the minions in the armourer’s department were men and rolled his eyes. “You’ve come for advice, then?” he rumbled. “It’s been a long time since I went to Atlantea.”

“Yes” replied Wolfhawk. “Things have changed, Goldyx, since you last went. Some new and powerful foe of legend, one General Volkare, has returned and is battling the mage knights.. We’ve explored much in the meantime and found new sites, new monsters, followers and treasure too. Atlantea is a much more varied place than it once was.”

Goldyx made the sort of acidly dismissive noise that only a dragon-kin can. “But” he said, gesturing vaguely toward the colossal book on which Wolfhawk perched uncomfortably, “no doubt our lords and masters have added to the law and lore that govern our conduct to cover these new situations?”

Wolfhawk nodded miserably. “Yes. I had to learn it all by heart before they would let me out of the academy. Chapters were added to deal with Volkare and some of the new allies and monsters. It took weeks.”

He whistled in sympathy. The lore and law was long enough without new material. “Don’t worry” he strove for words of comfort. “I know you, and your training. You move swiftly, and easily. It’s what you do best. There won’t be so much waiting around for you when you get to Atlantea like there was for me. Your time will come soon.”

Mage Knights need no sleep. They sat and talked long into the night, while the fire burned low in the grate and bathed the room in the dull orange of its dying embers. Wolfhawk shifted uncomfortably, partly due to her makeshift chair, and partly because in spite of the old Draconum’s obvious apathy, she itched with desire to get away on her first adventure. 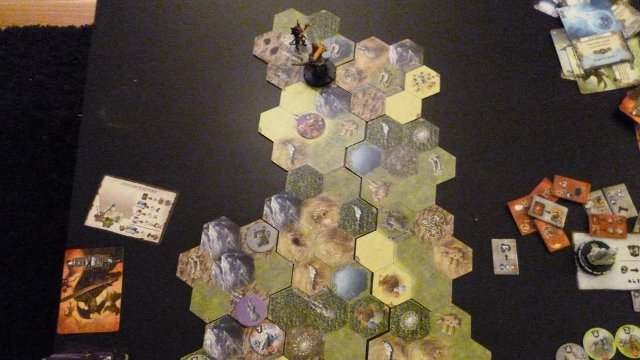 On a similar evening, about a month later, Goldyx was roused from his game-tablet by a frantic pounding on his cottage door. Alarmed that someone might damage the woodwork he leapt up from his easy chair and flung the portal open.

There stood Wolfhawk. But not the shy, slight woman he remembered from her last visit. This Wolfhawk was at once battered and bruised yet possessed of an extraordinary power and vitality. She almost pushed past her massive host in her impatience to reach his uncomfortable visitors chair. And then sat upon it with the air of someone who’s become used to sitting on cold, hard stone, if at all.

Startled, Goldyx remained standing at his open door as her tale came tumbling forth, almost as if a dam of silence had been finally breached, unable to contain the force of the story behind it. She told of the new troops of the Orc Khans, from gangs of snivelling goblins that could fell you with multiple weak attacks to massive catapults that hit hard but which could be dodged with movement instead of blocked.

She spoke of finding a horrific golem at the bottom of a dungeon, a fearsome foe that was immune to magic attacks, and yet could fling enormous balls of enchanted fire and ice when roused to fury. And if you could not block these and counter attack in turn, it was almost impossible to kill: missiles were next to useless against it.

The old tricks of combat that Goldyx had taught her that night, seemingly so long ago, were nigh-on useless now, it seemed. Everything needed to be more considered, more cunning. There were so many more options to consider before each action, and yet more things had become uncertain, unpredictable. New plans would have to be made, and some of them would have to deal with building yourself back up after ignominious defeat.

She whispered of new troops, skills and buildings. Of how she had clambered across walls and got lost in labyrinths never before seen or charted. Of how she’d learned from an ancient monk, alone in the library of an isolated monastery, a dreadful ritual of blood that would leave her wounded but with new and undreamed of powers. Of powerful familiars that needed a constant supply of mana to survive, and would otherwise collapse into dust.

But mostly she spoke of Volkare. Mighty, mysterious Volkare. Of how his rampages across Atlantea, either in search of cities to conquer and control before the Mage Knights got there, or in search of the very portal the Knights used to get to the continent, made solo or co-operative missions much more interesting, challenging and exciting. She stated flatly that the extra law and lore she’d had to slave over for so many long, dark nights, was a worthwhile tradeoff for reducing the tedious burden of overseeing a fake Mage Knight to help cover your tracks.

Goldyx looked doubtful. But Wolfhawk would not be swayed from her subject. When she mentioned Volkare a baleful light blazed in the wide, shining eyes beneath the helm. He was a dreadful enemy, surrounded by an army of his own, quite capable of levelling a city. Or an experienced Mage Knight. Each time she had challenged him and failed. In spite of her newfound power and hard-won wisdom about this new and wonderful world of Atlantea, she had failed. And the failure burned in her like a canker.

“Goldyx” she said, breathlessly, “I want to beat him. I need to beat him. And to do it, I must have your help.” She looked at him imploringly.

Goldyx stood a long while, it seemed. He first met Wolfhawks’ beseeching gaze, then turned to look out the open door. Soft hills rolled off into the gathering dusk, a distant one crowned in fire and smoke. Far away on the horizon there was twinkle that might have been the first star, or the gateway to Atlantea. It had been a long, long time.

“No.” He said finally. “No, I will not go with you. Companionship was never my style.”

Wolfhawk looked momentarily furious, then her shoulders slumped in defeat. She stood, and left without another word, visibly trembling with anger and disappointment.

Goldyx closed the door behind her. He would not help her defeat Volkare. The Law and Lore was still a pain in his scaly behind. It still took so much time to prepare, to journey, to explore that he would hate to share the glory. But maybe, just maybe, it was worth all that effort if he could go alongside her, and defeat Volkare first, before she got there.