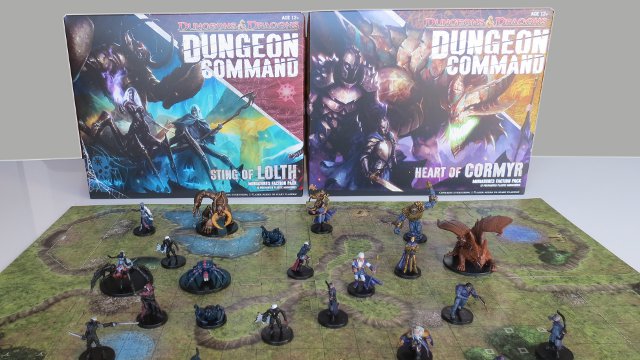 I’ve made no secret of my basically limitless adoration for the new range of Dungeons & Dragons board games from Wizards of the Coast. It’s great that there’s another big beast on the publishing block, better that they’re putting out superbly designed and innovative games. So I was obviously keen to take their newest offering, the modular tactical miniatures game Dungeon Command for a spin.

Each box of Dungeon Command comes with a set of pre-painted miniatures, some double-sided jigsaw board pieces and two decks of cards, one that has the stats for the creatures in the set and another with orders to make them do neat stuff. You need access to at least two boxes to play a proper game, and if you have more then you can have three or four player set-ups. Everything in each box is interchangeable so the potentially bottomless nature of recombining these things should be obvious. And online retailers are offering sets at prices that make owning several of them entirely feasible.

It’s a bold and interesting business model, doing for miniatures games what the “living card game” concept did for collectible card games. But there’s more: these sets aren’t just interchangeable with each other, but also with the superb Adventure System board games. Map tiles from the two types of games will interlock, and each Dungeon Command game has a set of creature cards that allows use of the miniatures in Adventure System games. If it all works, it has the potential to become a massive sub-hobby in its own right.

To answer the question of whether it works we have to play the game. Play in Dungeon Command reminds me very much of lightweight tactical war games, no bad thing in and of itself. Figures move across the board but have to stop when they move adjacent to an enemy. There are ranged attacks and line of sight rules, simple terrain effects and lots of constricting corridors and corners. Clearly, tactical maneuver and positioning is very important in the game and offers the players a lot to chew over as they move pieces around the board. 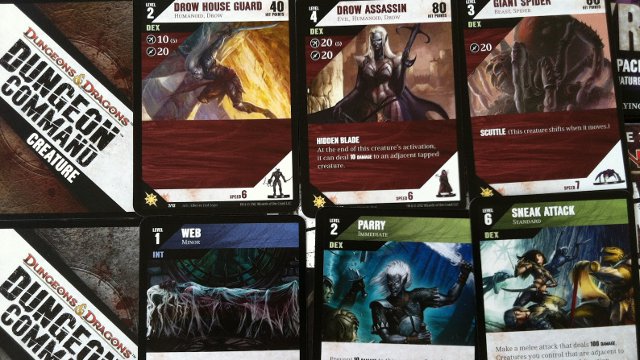 More controversial is the fact that this is an entirely dice-less game. When figures attack they hit by default and do a set amount of damage. But the picture is muddied by the fact that each player has a hand of order cards which can extend movement, boost damage or provide a basic defence by reducing or eliminating attacks made against them. The result is not unlike play with a combat resolution table: you can be fairly sure that when you attack, the possible result will fall within a narrow range but never entirely certain.

But order cards are only regained at the rate of one per turn. And since you can potentially play several on each creature you command each and every turn your starting allowance tends to run out extremely quickly. And then the limitations of this dice-less system become clear: without order cards you can tell exactly what each creature is capable of doing each turn. And with that knowledge you can predict what your opponent is going to do in advance.

Theoretically this should mean it becomes a game of deep positional tactics. In reality by the time the order cards run out you’ve done most of your positional tactics and you’re slogging it out with enemy creatures so the game turns into a repetition of “that does X damage, this does Y damage” until someone wins. There is still some unpredictability because you get one new order each turn. But you’ll start to notice that a lack of variety in the cards means that their play follows a fixed pattern: attack orders do more damage than standard attacks, so you soak up the standard attacks and save your defensive orders to counter attack orders. That’s the mold: play an attack order and see if the defender has a defence order. 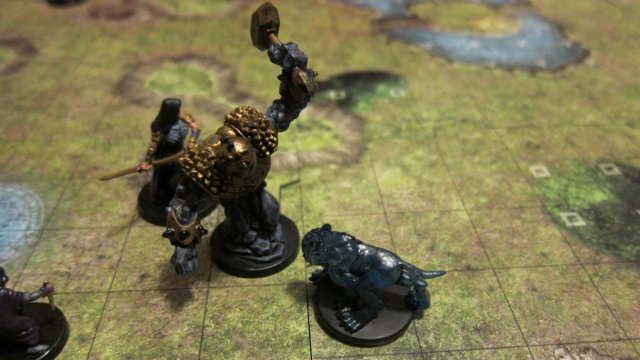 It’s a shame that combat become so repetitive because the movement and maneuver aspect of the game is really good. Getting your forces where you want them is hard work, and a variety of movement-based orders in deck, many of which allow you to bypass normal movement restrictions like stopping adjacent to the enemy or paying double to move over difficult terrain, allow plenty of scope for creative strategy. The early parts of the game when maneuver is still important and you’ve got plenty of cards in your hand is fun and engaging. But it makes you pine all the more for what could have been when the paralysis sets in.

The rules do have one more trick to keep things interesting once the slogging starts and that’s the option to “cower” instead of taking damage. You win games of Dungeon Command by forcing your opponent down to zero morale. Most of the time you reduce your morale when a creature dies by an amount equal to its level. But if you so choose you can have a creature “cower” when something hits it, in which case all the damage is taken by your morale total rather than by the creature. This is by no means a simple choice because creatures generally have higher hit point totals than they do level, so cowering ultimately means you take more morale damage. But sometimes keeping a creature alive can be the difference between landing a killer blow or ultimate defeat. When to cower therefore becomes a key decision in combat. Unfortunately it’s not quite enough to add the tension and excitement that the late game stages lack.

So the base game itself is a mixed bag. What to make of its integration into the wider world of Wizards of the Coast products? I have two sets to review: the wicked dark elves of Sting of Lolth and the noble heroes of Heart of Cormyr. Do I really need to point out that although you can, mechanically, mix the cards from these two sets together, doing so is going to create a thematic mismatch of truly titanic dimensions? That, of course, may well change when newer sets come out but for the time being it looks like a bad idea. Integrating with the Adventure System games presents a similar problem. The drow figures from Sting of Lolth go down very well with the Legend of Drizzt game, but not so much with the other Adventure System titles. Heart of Cormyr is full of heroes and so doesn’t present its figures as new monsters. Rather they behave like non-player characters which can appear in the game with a new event card. It’s a good idea in theory. In practice it’s a couple of new events amongst a big deck and happens so rarely as to be barely worth the effort.

These initial Dungeon Command titles are mediocre games that start out well but go downhill toward a dull endgame. However they’re built on top of a clever premise that’s ripe with possibilities for the future. With some added variety in order effects and creature powers, more than two players in the mix and properly thematic combinations between sets it has the promise to develop into something awesome. Whether that will be fulfilled whilst avoiding power creep and complexity gradients is in the hands of the designers. Antecedents are not good, but if anyone can pull it off then the talented design team at WotC get my backing for being the ones to do it.