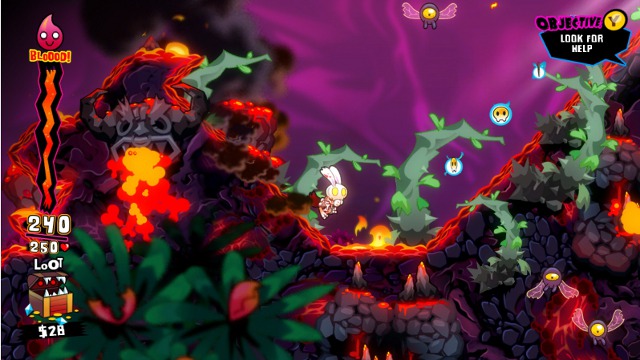 I won’t lie to you, getting a booth appointment with Sega has not always been the most fruitful way to spend your time at E3. Over the past few years, for every interesting looking title, there was one that wasn’t nearly as special. In other words, for every Vanquish there was a Binary Domain. With this in mind, imagine my surprise when I left the Sega booth having played and seen three of my favorite games of E3. 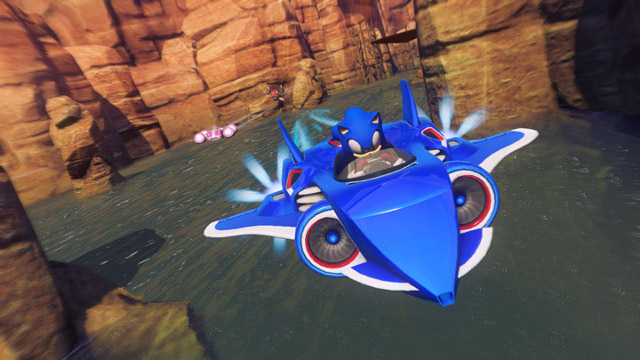 I’m not a kart racer, but Sonic All-Stars Racing Transformed is definitely on my list of games to look out for. The same premise as the previous game holds here, namely you get to race as one of 21 Sega characters, all with character themed vehicles. All 21 characters weren’t present in the demo, but plenty of Sega characters and games were represented from Sonic to Crazy Taxi, Jet Set Radio, Golden Axe and Shinobi.

Similarly, rather than race on generic tracks, every track is themed to represent a Sega property, and each track has a story that unfolds as you complete laps, sometimes altering the track in the process. The Panzer Dragoon track has you evading dragoons as you drive, paddle and fly across the track. The Super Monkey Ball track has plenty of branching paths and crazy turns, complete with a Monkey Target bulls-eye that rewards you with a super pick-up should you hit the center. Finally the Golden Axe track has you racing around a mideval landscape, avoiding lava and fireballs as the track degrades into a molten mess. 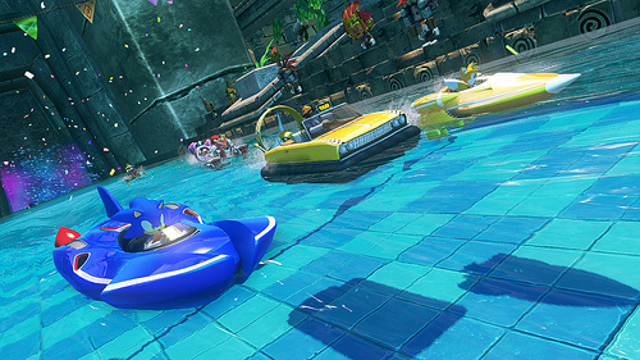 The transformations are handled automatically based on the current need, and while on ground, sea or air, all handle differently with various ways to build up boost. While driving, maintaining a successful drift allows you to build up a boost to be used once you come out of your turn. While in the water (or the lava) catching a big wave and performing in-air stunts rewards you with more zip and while flying, sharp banks and evasive maneuvers are the key to taking first place.

All of the vehicles have distinct differences in how they look and handle, and not every vehicle is right for every track, requiring a decent amount of practice before you can figure out the best car for the job. Power ups have been scrapped and overhauled so that there’s more variety while at the same time not providing a blue shell to any one player.

I wasn’t planning on spending any time with the game at E3, but now I may have to put it on my kids’ Christmas list, even if they don’t know that they want it. Father knows best! 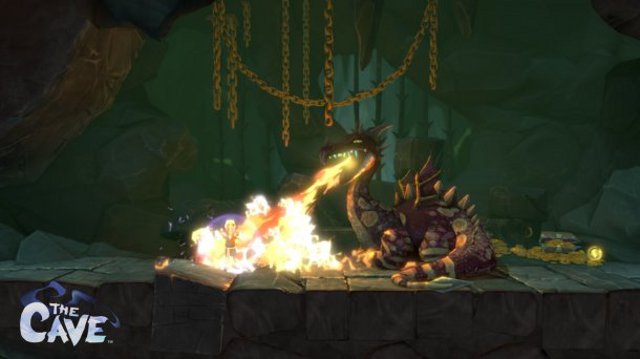 Once I was done racing, I went into a developer led demo of The Cave, the upcoming adventure game from Ron Gilbert and Double Fine. The Cave is a talking cave that has existed for millennium with the express purpose of giving those that brave its depths the chance to find the one thing they want the most. Seven characters are willing to enter the cave including a monk seeking enlightenment, a hillbilly looking for love, a knight searching for a sword of immense power and a time traveler trying to right a wrong from a million years ago. 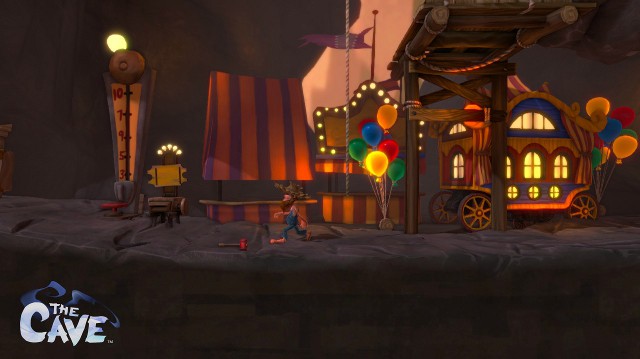 The cave wants to the adventurers to succeed, so death is never permanent and never results in restarting puzzles from scratch. If a monster eats the hillbilly, or the scientist gets torched while trying to steal a dragon’s treasure, they get placed back a slight walking distance from the place of their death. The game is more about moving forward and getting characters to their end goal than punishing players, an important sentiment given how much experimenting and exploring is necessary for solving the puzzles.

While there is no grand ending given for seeing the ending of all seven characters, the unique special abilities and stages for each character is more than enough incentive to play through the game multiple times with all of the characters. The fact that the character models are all unique and beautifully rendered and that the game is whimsical and funny in equal measure also doesn’t hurt.

When the session was over, another writer asked the Double Fine rep if Double Fine had plans to go back to making $60 boxed products. The Double Fine rep answered that not every game is priced appropriately at $60, something I wish more people in this industry understood. We continued to chat later on an he told me that working on smaller projects allows for greater creative flexibility and a greater sense of satisfaction in being able to see the results of their work get to the public in 12 months rather than five years. If The Cave lives up to the promise shown in the demo, I’d much rather they focus on games such as it then spending four years working on Brutal Legend 2. 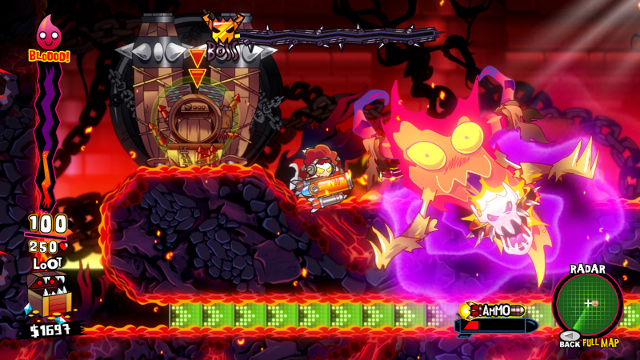 Once I was done with The Cave I headed over to play one of my absolute favorite games of E3, a combat platformer exuberantly named “Hell Yeah!” In Hell Yeah! you play as Ash, the prince of Hell. Ash is a rabbit skeleton, like his father before him. Unlike his Pops, Ash has an unfortunate prediliction towards amorous encounters with his rubber duckie, acts of which were photographed by demon paparazzi and distributed to 100 different monsters. Rather than have his standings in Hell diminished, Ash sets out to kill all 100 monsters and erase any record of his scandalous duckie lovin’.

To fulfill his mission, Ash rides around in a circular saw blade that can be used for killing enemies as well as cutting through barriers for loot and greater traversal options. Ash can mount weapons such as rocket launchers and machine guns to his spinning blades of death to help him deal with the various enemies looking to stop him. If seeing Ash tool around in a saw blade isn’t your cup of tea, spend some money at the shop to give him a donut to ride around in, complete with an afro or motorcycle helmet. 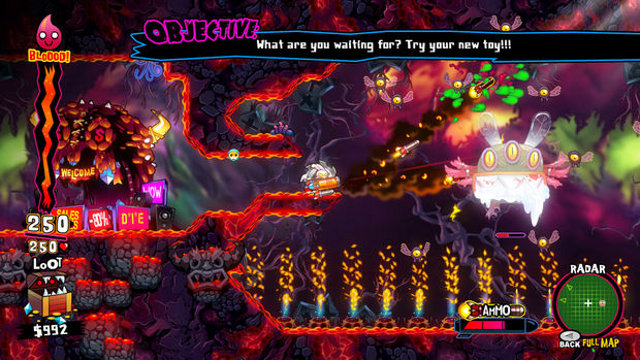 With 100 monsters to defeat, you come across plenty of sub-bosses and bosses to destroy, all of which require a combination of health bar depletion and a WarioWare style mini-game to finish the boss off. In one case you mash the A button to squish a sub-boss between your fingers. In another you shoot a boss with an Ash Cupid arrow, unleashing a volley of heart arrows in the process. It’s all wonderfully silly and over the top, perfectly fitting the vibe of the game.

The game is absolutely beautiful with plenty of day-glo colors and lots of variety between enemies and environments. All of the artwork was done by one person over the course of two years, an amazing feat given the layers of complexity in the backgrounds alone, not to mention the enemies, sub-bosses and bosses. 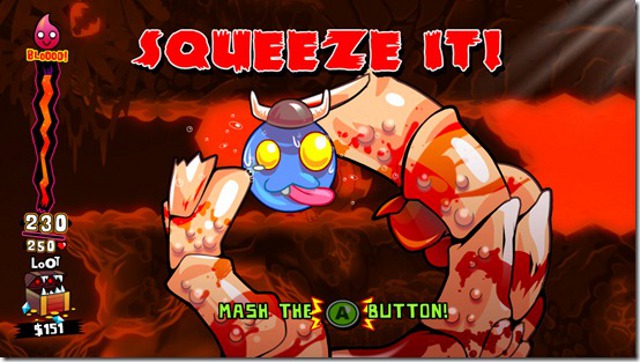 I can see the somewhat immature and self-aware vibe turning off some players, and there were times I rolled my eyes a bit during bits of dialog, but the gameplay is extremely solid and fulfilling, so I’m willing to put up with a little bit of immaturity along the way. After all, the game is named “Hell Yeah!” That title doesn’t exactly scream subtlety.

By the time I left Sega’s booth I was floored with how much promising content they had on display. Maybe it was a case of entering with diminished expectations and having those expectations blown out of the water, but I think it’s more that I saw some genuinely good games there, and when that happens, you can’t help but be enthused.