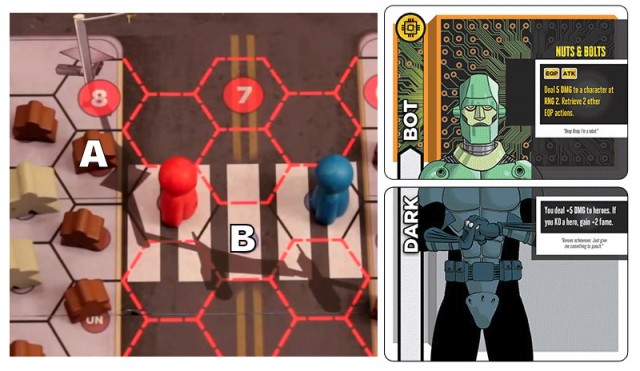 Heroes Wanted, designed by Travis Chance with Nick Little, may be the last best hope for the superhero genre on the gaming table. It is not an elegantly designed game. It lacks polish and the kind of refinement that often delineates good from great games. There are a couple of design elements that I think will likely be terminal issues for some players. It’s not that Heroes Wanted isn’t a fun game- I think it is- and it’s also not that it’s a bad game because it most certainly isn’t. But it is alternately raw, na?ve, clumsy and tentative in a kind of garage rock-y way and your mileage with the game may depend on how tolerant you are of a design that takes a lot of risks but doesn’t always hit paydirt. Regardless, I’m quite taken by a few aspects of Heroes Wanted that I think are quite unique.

The concept cleverly undercuts one of the core problems of the superhero board game. Because of the subject matter, superhero games tend to fall into two camps. One is the licensed game division, where you’ll find games featuring iconic pop culture characters- “name brand” heroes from the Marvel and DC stables. The other is where games like Sentinels of the Multiverse or Capes and Cowls reside, ersatz comic universes with stand-ins where Spider-Man and Batman are noticeable in their absence, regardless of the creator’s best efforts to provide alternative heroes.

In Heroes Wanted, the players are not Justice Leaguers or Avengers members. They aren’t taking on the roles of characters that someone else thought were reasonable competitors with the heroes created by Jack Kirby and diverse others. They’re creating a new character every game from a deck of A cards and B cards that define a couple of simple powers and an identity. It’s not as groundbreaking or boundlessly creative as Cosmic Encounter, but I’m reminded of the alien powers or even the race mix-ups in Small World. Needless to say, The Leather Millionaire, American Meteor and Naked Beard are barely even Booster Gold or Squirrel Girl caliber, and the depiction of heroes in this game is much more Mystery Men than Watchmen.

Thematically, these mix-and-match characters are wannabe, ne’er-do-well aspirants. They’re hungry for fame and recognition, even if that means hammering a team-up partner for a couple of points during a mission to stop a villain from littering or bootlegging DVDs. It’s a competitive game with a co-op angle- there’s only one winner at the end, but if the villain gets away with the crime. The villains are also randomly generated by two cards, just like the heroes- usually to great comedic effect. Expect to square off against baddies such as Frankenpunk, the Rubber Hobo, Mama Skull and the 1,000 Year Old Skunk.

Needless to say, these not-ready-for-prime-time heroes aren’t going to be assigned to save the world from cosmic-level planet eaters or globe-spanning, diabolical crime organization. The brilliant scenario design instead puts the characters into four different street-level brawls including the above pair, one where the heroes run around an amusement park smashing mirror portals and another where a bunch of villains bust out of the Zeta City Asylum. All take place on small, pre-printed hex maps populated by meeples representing all of the characters. I love that these scenarios- all of which are printed on a board designed to look like a newspaper front page with most of the scenario-specific information printed on it- are very mid-Silver Age fare. They’re a little zany and definitely not serious. The one where the heroes have to stop the villain from bootlegging DVDs tends to turn into a madcap chase around a conveyor belt with bombs going off. Rest assured, this isn’t another superhero game where there’s a map of the city and you move a hero token around to resolve a crime token or whatever. This is really a tactical, card-driven battle game with very tight, limited cardplay and an automated adversary.

Each player has a small, set hand of cards that generally move, attack or activate ability. Each turn, a player plays one of these and does what it says on the card. You might spend an attack card to knock out a Henchmen or Underling, all of which are placed on the board at the beginning of the scenario. Or you might be in range to put some damage on the villain- or another hero. Cards played are in discard until a player takes a rest action or is dealt an injury, so managing when to play the limited cards is a critical skill.

After the heroes move, the villain’s turn is automated. A threat marker is moved, which may trigger an effect such as those bombs going off in the DVD factory. Then, each player is dealt damage calculated by the number of Henchmen and Underlings they are adjacent to as well as whatever damage the villain does to all players. Each of those action cards- assuming the player has any in hand- has a Stamina value and playing them soaks the damage. If you don’t have enough, you’re KO’d and dealt an injury. If the villain gets away, everybody loses.

But if the heroes win, Fame points are tabulated to determine the winner. Beating up the horde of minions earns points, as does dealing damage to the villain or accomplishing scenario-specific goals. But the big points- and the key to powering up your hero- are in Headlines. These are modular, variable goals available to all players. You might have one that rewards players for dealing 15 damage to a villain, for KO’ing a number of minions or for putting down one of your “allies”. The first person to accomplish one of these achievement-like goals moves a marker from their hero card over to the Headline token. The sooner you accomplish a Headline, the more Fame it’s worth. And moving those markers unlocks an additional action card and provides some one-time special abilities over the course of the game.

The headlines are where things start to get a little hairy. I like the objectives in principle, but if you’ve got headlines generating points for dealing damage to the villain- and the goal of the game is to beat that villain- then spending those limited card resources to fight underlings and henchmen is a waste of time. And so is fighting other heroes. What’s more, if you are in a position to just nail the villain, it tends to make the most sense to beat the villain early and run the clock out rather than allow other players to get Fame points any other way. And so far, I’ve not really felt all that challenged by any of the villains or their ridiculous schemes. The opposition is almost passive.

I really like how the game can- at its best- feel like a crazy brawl with tons of bad guys on the board and a villain running around, presumably laughing maniacally and delivering a hyperbolic monologue. And then there are the heroes, plowing through the peons to try to get in a shot at the boss. But it also can feel incredibly static- none of the Henchmen or Underlings move, they just add damage if you’re standing next to them. The villain or villains tend to move in a preprogrammed way, and it’s easy to anticipate what is going to happen. On the one hand, I like that it avoids the often cruel capriciousness of games like Sentinels of the Multiverse, but on the other the game can feel terribly un-dynamic.

It doesn’t help that the game feels easy, and the villain is entirely automated with no “AI” or other drivers to create a sense of evolutionary or reactive opposition. This means that tension is too low, stakes never really feel very high and drama is often at a minimum. The mix of competition and cooperation sometimes doesn’t quite gels because the objectives may or may not support both aspects of the game. The game should, at all times, feel like a knuckle-busting melee with super powers going off and the balance teetering on key outcomes. But it sometimes feels like very little is actually happening.

This extends to what the players can actually do in the game, which is as suggested by the cards quite limited. There are rarely big, sweeping moves or turns of events. Usually, combat is just a matter of seeing if something is in range and playing the card. Maybe the other player, if you’re targeting a hero, plays a block card and gets another card from his discard pile. But it can all feel strangely limited and still. If players aren’t buying into the concept and really playing to its themes, it can run aground quite harshly.

There are optional “Quirk” cards to help players sort this out, but I absolutely do not care for them. Each player can take one along with their hero cards and they generally require some kind of in-character statement or proclamation. Maybe you have to say a tagline or behave in a certain way in reaction to something that goes on the game. I hate game elements like this. I have no compunction about making silly comments, saying obnoxious in-character things during play or making up jokes during a game. I do not need cards and a tacked-on score penalty mechanic to encourage me to do so. For those that can’t handle any kind of social element, the solo option is really quite good even if it’s too easy as written.

So Heroes Wanted is really quite sensitive to the kinds of people playing it. Those that appreciate the scrappy charm of playing rolled-up (and usually quite ridiculous) superheroes out to bring a litterbug not-so-supervillain to justice will get more out of the game than those who are looking for something more big-budget, so to speak. Those who can roll with some of the questionable mechanics and the almost too-restrictive card play and dig into the concept might find that there is one quality that puts Heroes Wanted head and shoulders over more or less every other superhero game ever made.

This game has heart, and that is a quality I really appreciate. There’s an almost innocent “aw, shucks” charm about it that I find oddly arresting, to the point where I’m a little more forgiving about some of this game’s issues. It’s unique, with unusual mechanics that aren’t counterintuitive or complicated. I like that the designers went a very different route with the superhero concept and gave the players the agency to create these heroes without the burden of trying to replace IP-bound characters. I like that they went light instead of dark but didn’t get stupid with it, and I especially like that much effort was put into making each scenario distinct, narrative and self-contained.

As it stands, Heroes Wanted is definitely a qualified recommendation and I’m not surprised to see some mixed reviews among the extremes of love and hate out there in the discussion about the game. I like the game without a doubt, but I often feel that I like it in spite of itself. It’s the odd kind of title that impresses me as much for its potential as its current state. It’s actually fairly easy to house rule and it already has expansions on the way so there are opportunities for improvement. I think there is definitely a good game here despite some missteps- consider it a diamond in the rough.