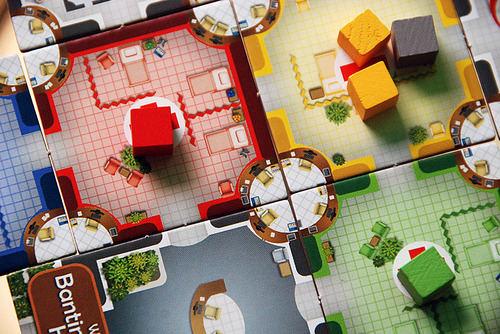 Mark Klassen’s Quarantine, new from Mercury Games, is the kind of title that easily gets lost in the shuffle these days. It’s not another high profile million-dollar Kickstarter zombie game, it doesn’t bear a popular license, it isn’t making the rounds among the video review tastemakers, and it doesn’t feature any deckbuilding whatsoever. It’s really just an old fashioned tile-laying game that smacks of some of the qualities of the old pre-Boardgamegeek.com German games movement, and many might find it unremarkable. But the concept is fun and the theme is appealingly fresh- players are tasked with building a hospital and triaging patients into appropriate care in exchange for resources spent to acquire additional rooms for their facility. Points are scored at the end based on the number of completed nurse stations in your hospital, the special rooms you’ve built, the number of resources you’ve earned and not spent from treating patients, and by not having any patients waiting to get in the door.

It’s a two to four player game. But don’t bother with two, play it with three only if there’s no choice, and assume that it is best with four, always. Process is smooth, accessible, and very family friendly. On a turn, you get four patient cubes that you can place at the door, in a queue, in front of anyone’s hospital. The level of abstraction is high, so you’ll have to use your imagination to determine what ailment or injury each of the four colors represent. You might want to put them in front of yours to shuffle them into available rooms of matching colors, and cure them to earn some money. Or you may want to load up the guy with only one red treatment room with all of the red cubes you drew to slow him down. It’s not uncommon for players to ruthlessly dump unwanted patients at the doors of rival hospitals. The balance is that there are some special rooms that do crazy things like treat ALL of the patients in line of a particular color, so your medical maliciousness might backfire and give the other player points.

You might also draw gray cubes, which are an MRSA-like disease (“Graysles”) that you can stick in another player’s hospital to shut down the use of a room or even cut off parts of their facility altogether. The point-scoring nurse stations, which are built by placing four tiles in a 2×2 arrangement, are also disease vectors. A Graysles cube placed on a tile that is part of a station spreads to an adjacent tile. A player laden with Graysles has to actions to control the disease, preventing them from taking more advantageous actions during their turn and blocking the special abilities of their rooms. It can get nasty.

Once the patients are in line- which is a nice, subtly thematic visual- and any hospitals are contaminated, the player gets four actions that essentially boil down to placing patients in line into rooms, curing those patients for resources, acquiring new rooms, decontaminating, or re-arranging their hospital to ensure that every room can be accessed via hallways or that special rooms that give a neighboring one are in an advantageous position. There’s also an action-banking choice which can be nice for when you really need five or six actions later in the game.

I love the way that buildings are priced and sold in the game, and if there’s one reason that you should pay attention to Quarantine, this is it. It’s a brilliant mechanic. When a player wants to build one of the eight special rooms in the display they open a contract for it by setting a price that is at least two resource cubes (i.e. cured patients). If the round comes back to them and no one has bought the contracted rooms by paying the right number and color of cubes then you put it into your hospital. There’s only two of each type, so other players can effectively steal your contract and thwart your building attempt. If there’s a remaining one it goes back into the display with the price you set on it. Strategically, this means you can set a price in colors that other players do not have or you can put four or five cubes on there to price everybody out of the market. The balance is that every two resource cubes at the end of the game equals a point and each special room is only worth one point, so you’ve got to weigh out the room’s special ability and its actual, long-term cost.

You can also buy additional rooms of the four patient types to increase your ability to treat those colors and complete nurse’s stations, but the special rooms create a lot of interesting tactical and strategic choices. They can bail you out of bad situations, increase efficiencies, and even monetize the decontamination action. They’re not exactly balanced and some rooms are obviously more beneficial than others, but every game only uses eight of the sixteen available so different combinations result in different valuations and utility.

Quarantine is fun, light, and definitely family-friendly but I appreciate that it has some real friction. Players will get straight-up vindictive after someone dumps a bunch of unwanted patients at their door and then also slathers Graysles all over their hospital, and the game gives players plenty of opportunity to interfere with and disrupt other players. Significantly, it does this by limiting the player’s ability to perform standard functions rather than reducing or taking anything away so it’s not so much a “take that” kind of affair. That said, you’re always vulnerable, always reacting, and always considering how to slow someone down without giving them opportunities to turn negative impacts into positive ones.

Tile-laying games might be all but dead these days, but I found Quarantine to be a welcome return to that genre because of the element of interaction and some nicely executed unique mechanics. It’s not going to be a game that people are talking about much a year from now, and it’s unlikely to be celebrated as one of the best of 2013 by anyone. But it’s a solid, inexpensive, and unpretentious title that may be a welcome change of pace for gamers tired of current trends in the hobby.