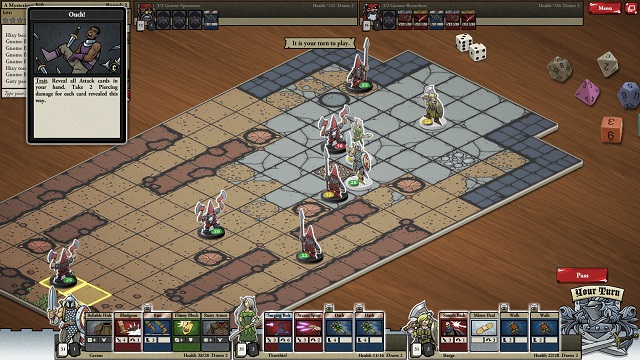 I don’t like grinding. Okay, so when it’s combined with epic detail and rich narrative, like in Skyrim, or with ball-breaking skill, like in Dark Souls, it can add a fantastically fun and addictive element to a game. What I hate are games based around grinding for it’s own sake, the endless repetition of kill monster, upgrade gear, kill tougher monster in the service of nothing more than pressing psychological buttons. The Diablo series is probably the worst offender, but so are endless cheap and free-to-play role playing games.

Card Hunter falls into that category. A free-to-play browser based flash game, with inevitable in-app purchases, it challenges you to assemble a team of three characters from the classic warrior, wizard, cleric archetype and send them into various brief encounters with enemies in search of loot. So I should hate it. I want to hate it. But I can’t. In fact it’s one of the most horribly addictive games I’ve played in ages.

In spite of its crack-like qualities, I’ve only played the preview version for a couple of hours, for reasons we’ll return to later. So this isn’t really a proper review. By the time you read this you’ll be able to check out the real live version for yourself: and you should do so.

There are two reasons why Card Hunter succeeds where so many other games of its ilk manage to be nothing more than dryly repetitive and tedious. The first is the infectious glee it takes in re-creating the feel of everyone’s first encounter with Dungeons & Dragons. Everything is charmingly steeped in sentimentality, from the fonts used mimicking those in 1st edition AD&D adventure modules, to the inexperienced and enthusiastic dungeon master who serves as your narrator. It doesn’t so much hit the nostalgia buttons, as crush them with a sledgehammer, and it’s wonderful.

But the second secret is there’s actually a decent game engine underneath the presentation. Each character has slots for certain types of equipment, and they gain more as they level up. Each piece of equipment that you loot or buy comes with a selection of cards, and the cards of each item an adventurer has equipped makes up their draw deck. Most of the game takes place on small tactical maps where you play move and attack cards to try and outmaneuver and kill the monsters.

Armour gives you defensive cards which you don’t play, but which take up space in your hand and sometimes absorb damage based on a dice roll. I didn’t come across a very wide range of different effects during my brief time with the game, but throw in different terrain types and there’s just enough to make each encounter something you have to stop and think about if you want to succeed, rather than mindlessly wade in with wands and weapons.

But while there’s tactics, there doesn’t seem to be much in the way of strategy. Specifically I was hoping for an experience a little more like the aged Magic: the Gathering PC game from Microprose where you had to carefully plan your deck overall and hunt down the cards you needed to complete it. But in my limited play time I didn’t see much in the way of synergies or complementary card effects to build a longer-term strategy around. Rather, it seems to come down to making sure your party is equipped appropriately for the sorts of monsters they’re likely to encounter.

Although that’s a little disappointing, and may harm the long-term appeal of the game, there’s still plenty to enjoy. It’s accessible, fresh and fun, a delightful contrast to so many lofty new releases with their grandiose goals. And the reason I only spent a couple of hours playing it? Because on launch, all progress on my preview account is going to be reset, and two hours was enough to convince me this was a game I was going to play a lot, and I couldn’t stand the thought of putting in the effort and starting over. There’s a multi-player mode too, so grab your gear, and I’ll see you on the dungeon floor.