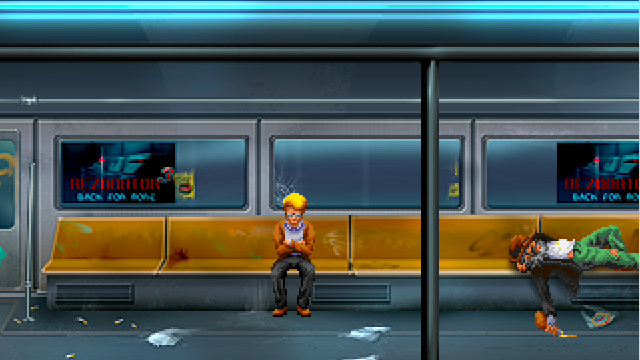 First Fez, now Resonance – it seems that the theme for 2012’s indie retro-styled games is in taking the aesthetic so many gamers are now tired of (oh, hey, this looks like it’s 8-bit/16-bit! My childhood!), and making it relevant all over again. With Fez, it was the magic of the utterly obscure secret world behind the puzzle-platformer veneer. With Resonance, it looks to be a genuinely interesting, well-written story.

I should preface this with saying that Fez and Resonance are very different games, similar only in their embrace of all things retro. This time around, it’s early to mid-90s point-and-click adventure games, complete with lovingly animated characters and slightly fuzzy backgrounds. It looks just like beneath a Steel Sky, if you squint a bit.

However, the demo (which is out now) belies an involved storyline with four playable characters, and a seemingly-awesome storyline. From Rock Paper Shotgun:

“The plot immediately reminded me of NBC’s ill-fated Flash Forward. There was a reason that show was ill-fated – it was rubbish. But the premise was not, and it seems not to be here too. At a certain point, explosions go off all around the world, caused by some mysterious device. You play as four different characters, whose stories run simultaneously in the build up to that moment (and maybe after it – I’ve only played the demo so far), in a combination of near-future sci-fi and just general everyday life stuff. Which is a splendid combination.”

I’ve been following this one since GDC, and I’m excited to finally get my hands on it next week (with a little help from my good friend, Parallells). It launches on Tuesday.