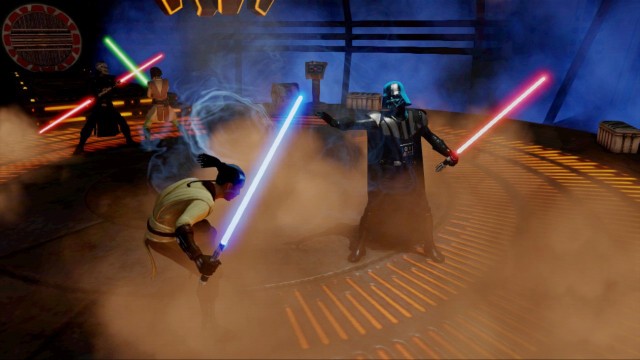 Michigan lost. I’m in mourning. Except not really, because it was an amazing, wonderful season and that team did the school and its fans proud. Also, subs. Craziness. You know the drill. Mostly I’m just hungover. Off of three beers. I’m not sure how that happens. I’m a lightweight. Anyway. This week’s ramblings consist of a large bag of half empty as Disney realizes what we all already knew, EA demonstrates itself to be as tone deaf as ever, and an MS employee gets in trouble for being honest about the wrong things. But first, something wholly awesome.

X-COM versus XCOM. Adam Sessler of Rev3Games did a sit down with the co-creator of the original X-COM, Julian Gollop, and XCOM lead designer Jake Solomon. As a fan of both games, it’s just neat to see two of the principles behind them congratulate each other on being so awesome. And I’m not even being sarcastic. They are awesome for doing this:

LucasArts Is Gone. LucasArts Has Been Gone. A lot of people felt sad, angry, etc. when Disney announced they were shutting down LucasArts. Beyond feeling bad for the people losing their jobs, I’m not sure why. LucasArts hasn’t been the LucasArts we all fell in love with for a very long time. Here’s a list of their projects. First of all, they’ve barely published anything developed in-house for the better part of a decade and the titles they did have a hand in were largely dogs. Knights of the Old Republic? Bioware. The latter-day Jedi Knight games? Raven. Even X-Wing: Alliance was developed out of house. Yeah, 1313 looked cool in a hands-off demo. Lots of bad games look cool in a hands-off demo. There was a time, and this is going way back, when Colonial Marines looked promising. We know how that went. That Disney is going to license out their game properties to other developers isn’t a new development. It’s a continuation of the status quo. There just won’t be a LucasArts logo on the box anymore.

EA Opens Mouth. Announces Business As Usual. There was a time, when they were busy destroying Origin Systems from the outside in, that I absolutely loathed EA. Then there was a time they seemed to be doing interesting things, letting Bioware make awesome games, trying new stuff like Mirror’s Edge and Dead Space, etc. And then… well, you know. I pretty much loath them again, to the point where I’m not even sure I’m all that interested in Dragon Age 3, let alone anything else they might put out. So when the company once again became a finalist for Consumerist’s Worst Company in America award, I wasn’t exactly surprised. I was even less surprised when COO Peter Moore stepped up to the mic and promptly made an ass of himself. I could spend the next 2,000 words telling why the company can’t fix what ails them because they don’t even understand the problems they face, but Ben Kuchera already went and did it for me:

EA has become a company that releases mediocre products created by faceless teams. There is no real vision at work, no grand design. Just the idea that free-to-play games and microtransactions are the wave of the future, or at least they better be, because none of the company’s $60 boxed releases are finding much success with either critics or gamers. Lord knows that the latest Madden game will do well, but that’s only because gamers don’t have a choice if they want an official NFL title. FIFA will also likely remain a hit in the global market. So they have that going for them. Which is nice.

I’m not sure it’s possible to say it any better than that.

Microsoft to Gamers: Let teh Noobz Eat Cakeses! Microsoft has a Creative Director named Adam Orth. Orth uses Twitter. Microsoft would probably like it if he didn’t. Not because he says things the company doesn’t already think, but because he said exactly what they do think. Via The Verge:

“Sorry, I don’t get the drama over having an “always on” console,” he said, before adding a #dealwithit hashtag. “Every device now is ‘always-on.’ That’s the world we live in.” When pressed on the point, Orth compared the situation to buying a vacuum cleaner knowing the electricity in your house might go out, or using a mobile phone in an area with poor reception.

Microsoft put the muzzle on the guy and disavowed his statements, because… well, they pretty much had to. What Orth tapped into was, in my mind, something of a refreshing vein of honesty and not because I agree with him (obviously). I think his sentiments reflect exactly the sort of dickish tone-deaf, consumer-hostile thinking that goes on at these places. I can’t bother to be outraged because, at this point, it’s expected. It’s the norm. The console will come out. If it has enough of the features I want at a price I’m willing to pay, I’ll buy it. If it doesn’t, I won’t. It’s not worth any more thought than that. As for Orth, if MS shows him the door, I’m sure he’ll still have a promising future at EA.