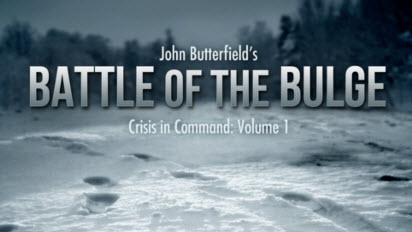 I’ve only had the game for a couple of days, but after playing it almost constantly through the week I’m already prepared to tell you that Shenandoah Studio’s Battle of the Bulge is the new standard as far as IOS boardgaming goes. Unlike the many ports we’ve seen of popular tabletop games or downscaled PC-style wargames like Battle Academy, Battle of the Bulge is a ground-up tabletop design by veteran designer John Butterfield that just happens to be on your iPad instead of rendered in cardboard chits. It’s a digital-only, low complexity area impulse wargame in the classical sense, and it is just about the most accessible and immediately appealing one in any format I’ve played in many years. This is it folks, this is the flashpoint game that makes wargaming a very modern, very real proposition for the tablet generation.

A large part of what makes this game so successful and so innovative is its presentation. I don’t know that I’ve ever played any wargame that was so accommodating, welcoming, and beautifully presented. Everything from the the user interface to the multimedia elements and right on down to the font choices are tasteful and impeccably modern. The usual graphic design traps that usually result in wargames looking like something for your grandpa are avoided, but more importantly this game barrels right through pretty much every barrier to entry the wargaming hobby has ever had.

The first time you start it up, you’re immediately shown a set of “basics” slides that show you all you need to know to get started. Newcomers will feel immediately comfortable with classical, time-honored conflict simulation mechanics. Veteran wargamers will feel like they’re coming home for Christmas- a Christmas spent fighting one of World War II’s most gamed battles. There’s also a comprehensive tutorial that actually isn’t irritating or overly didactic, and if that doesn’t satisfy you there’s a full rulebook complete with- get this- all of the tables and CRTs for total rules transparency.

Two Bulge scenarios are included, one of which is a three-day, abbreviated version of the full game wherein the Axis just needs to get to the Meuse river to win. You can play this in fifteen minutes. The longer game offers more objectives and victory point opportunities as well as more time to maneuver and really experience what the game’s quite challenging AI has to offer. Both scenarios allow you to command either Axis or Allies in opposition to one of the other side’s two commanders, each of which plays with a different personality.

I’m not going to recount the whys and wherefores of the Battle of the Bulge and I sure as hell am not going to give you the order of battle in the space of a review. If you want historical background, the game has a generous section filled with a succinct history lesson complete with a glossary and description of the arms and armor used. All you need to know right now is that this is a game of the Axis pushing hard with their Panzers and Fallschrimjagers against a reactive defense, racing against time to gain ground while trying to maintain a supply line. You want artillery? It’s there. You want narrative events and historical detail? They’re there. Terrain effects? Yep, they’re there too. Pretty much everything you could want in a high-level wargame is present, and it’s all executed masterfully in a no-bullshit fashion.

The interface is as smooth, sensible, and well-thought out as any I’ve seen in an IOS board game, and there are some brilliant ways of presenting information that make everything easy to understand. Attack a unit getting a terrain bonus and you’ll see in the combat resolution how one of your hits- a bullet hole- is absorbed by the terrain icon. Battles can be previewed and a graphic is shown that represents the likelihood of hits or retreats. Odds don’t look so good? Hit undo and try it again.

The gameplay is addictive and challenging. The time pressure is brutal for the Axis player, particularly in the short scenario where you’ve got to make the best use of roads and armor breakthroughs if you’re going to make it to Bastogne for the draw or the Meuse for the win. I love that the passage of time is variable, which means that a turn could take anywhere from zero to 120 minutes. Coordinating forces and getting decent stacks of three units (the stack limit) to the front and in position to smash the lines- or hold them- is just as compelling as it is any tabletop hex-and-counter wargame.

If the AI can’t beat you- but I think it will- there are hotseat and async Gamecenter multiplayer options, and they are both fantastic. I expect to see this game getting a lot of action into the new year with folks on my friend list. I’m really interested to see how different folks play the attack or defense differently.

I’m completely blown away by this game. It does some things that even the best IOS board games and titles like Battle Academy haven’t been able to do. It’s completely nailed the right ways to present a tabletop game in a digital format with absolutely no compromise, and in a way that anyone can enjoy. It does all of the things that digital board games should do, removing the administrative and logistical burden inherent in physical games and allowing the players to have fun with and really engage the mechanics. It’s such a no-nonsense design, almost effortless in its mastery of the traditional wargame form but with an eye toward the future of the hobby.

The easiest criticism about it is that it’s yet another Bulge game, another World War II game. But I think it needed to be something this familiar and well-tread to succeed. If this were a tabletop game, I don’t know that I’d be that interested in it because of the subject matter and the mountains of games available on it. But on the iPad, it’s fresh and innovative enough to be considered groundbreaking.

So the word is out to other publishers working on IOS wargames. Battle of the Bulge is the one to beat. At least until Shenandoah graces us with another $10 miracle- notice that it’s billed as volume one of “Crisis in Command”. Highest recommendation, and a Game of the Year candidate on every level.