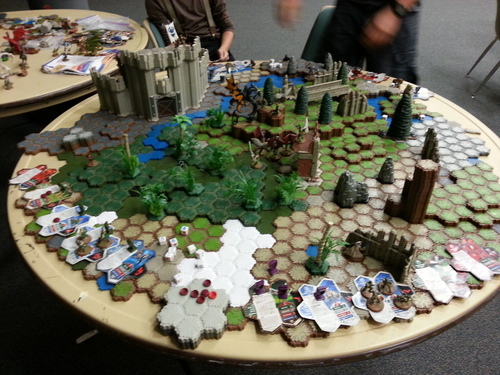 I’ve had an unusual relationship with Heroscape, the Hasbro-produced miniatures battle game with modular, plastic terrain that landed on mass-market shelves way back in 2003. I remember distinctly driving around to Target stores across Atlanta that summer once word was out online that it was available. I never, ever under any circumstance shop at Wal-Mart but I had a moment of weakness after coming up empty at so many stories, and of course that was where I found the last copy in town. I opened it in the car and was kind of blown away by what all you got for $40- remember, this was before pre-painted miniatures were a thing and at this time, $50 at a hobby shop would get you a nice big game, but one that was all cardboard and maybe some wood. Flipping through the rules, I was surprised at how the advanced rules had some tried-and-true hobby gaming concepts- line of sight, special abilities, zones of control and elevation.

I played it with a couple of friends, whose opinions ranged from “I’m buying five sets of this tomorrow” to “meh, would rather play 40k”. For my part, I thought the game was revolutionary- a thoroughly accessible miniatures game that deftly absolved the genre of its traditional barriers to entry (modeling/painting, terrain, complexity, financial commitment) while offering a truly innovative, almost proto-Minecraft system for custom playfield construction. It felt like the kind of game that makes kids game players, the kind of game that had that X factor, the kind of game that had the potential to be another Dungeons & Dragons or Magic the Gathering. I wrote a review of the game and posted it to Boardgamegeek.com, and it landed me my first job at a magazine.

The expansion packs started to roll out. I had friends that were buying multiples of everything, building these massive, elaborate battlefields across multiple tables. But for some reason, I just never could get into buying the additional squads and then later the terrain packs and other add-ons. They weren’t terribly expensive; I just didn’t want to keep up with them- even though I really liked the game. At my store, I sold tons of copies of the Rise of the Valkyrie set that I had bought on clearance from Toys R Us. I kept as many expansion packs in stock as I could.

Regardless of my affection, my interest in Heroscape just dropped completely off. Between 2005 and 2014, I played exactly one game of Heroscape with gaming bon vivant Steve Avery, the both of us trying to escape from a dreadful evening of whatever the popular Eurogames of 2007 were. It was fun enough, and I enjoyed playing with a bunch of stuff that I had never seen before, but at that point I felt so far behind that there was no point in trying to catch up. By the time the game was discontinued, it almost didn’t even exist for me. I had just moved away from it.

Late last year, I realized that I wanted to at least try to catch up. My boy is five and my girl is three, and they LOVE playing games with daddy. So I’m always looking for something that they can play that will also interest me without going over their heads. I remembered how simplistic the basic Heroscape rules were and thought that they would probably like the building aspect of it. So I worked out a massive trade with the notorious (but gracious) Peter “Superfly TNT” Ruth for most of his collection.

After sorting through two big boxes worth of Heroscape- tons of terrain, trees, walls, and of course lots and lots of miniatures- I set up a little solo game. It was almost instinctual; I didn’t even have to crack the rulebook except to remind myself that there was a disengagement attack. I played a few rounds and looked out over this little land I had made and wondered why the hell I didn’t stay with this amazing game.

Next step was to get the kids on board with it. I told them that were going to play a “battle” game and pretty much just dumped a mountain of terrain pieces on the floor and told them to “build a land”. They had some trouble getting the pieces to fit right, but after about 30 minutes we had our land, complete with a little forest area, some snow, hills and a river crossed by a bridge. Then I handed them the giant stack of unit cards and had them pick what they wanted to play with- which went down about as I expected, River chose anything that looked like a robot and Scarlett picked only female characters. I didn’t care about point values, I just wanted them to move figures around and roll dice.

River picked up right away on pretty much everything. He understood the different values, rolling dice to get skulls for attack or shields for defense. He grasped the idea of line of sight like it was nothing, and I asked him why a guy higher than another guy gets a bonus and he said “because he can jump down and smash him”. Scarlett didn’t fare quiet so well, particularly with counting spaces and sorting out how to move. But she mostly got it after a few tries.

We didn’t play with special abilities in that first game, which meant that it was literally just moving and attacking with no regard for unique attacks, buffs or anything else. But it wasn’t very interesting. The next game, I let them use units with simpler powers and by jingo, they both understood that the elf gets to shoot his bow twice, the ninjas can disappear and the ice dragon can blow ice all over everybody. They can’t read, so they had to be reminded of abilities, but with some guidance we were pretty much playing the full game- glyphs and all. They even have a rudimentary understanding of the three activation shields and using the X one to fake out your opponents.

Which isn’t to say that we always play by the rules. I let them make some of it up as they play. I encourage them to come up with stories, explaining what happens during each movement or attack. They like that they can create a “scenario”, describing why there’s a battle. The last time we played the Marvel set, the good guys were trying to stop Doctor Doom and company from reaching a time machine. Last week we played a massive battle where Vikings were defending a castle from a joint force of elves and Scottish Highlanders. The skeletal Marro are favorite bad guys, and tend to always be rising up out of the swamps to attack- often partnering up with the Vipers, whom are understood to have exceptional swimming abilities.

Two things about the game still suck. Teardown is a burden, even with two kids helping. We build some pretty big maps, so breaking everything down and sorting it all out for storage sucks. Speaking of storage, that is also an issue. Our collection is in two large bins and two Plano boxes. Mom is not crazy about how much space this one game takes up.

And of course, I want more regardless of how much room this game is already taking up on our shelves. The kids are happy with what we have and frankly speaking, we already have a larger collection than most people will ever get to play with. But the collectability of the game appeals to me in a way that it never did before. I want the Shaolin Monks, the Romans and the Knights. I want more of the special terrain, including the rare jungle plants and ice tiles. But at this stage, individual units and common squads can command big bucks on eBay- and by big bucks I mean they’ve appreciated in value two, three and four times what they were at retail. It’s one of the rare games that has a real sense of collectability built into it rather than used as a marketing tool to sell some kind of booster pack.

I’ve already bought some extra stuff- some of the less expensive common squads and some single figures that we were missing from the Rise of the Valkyrie and Swarm of the Marro base sets. I’m always looking at lots on eBay to try to catch a good deal. Do we need more? Hell no. But I’m enjoying this aspect of the game more than I might have even ten years ago. Especially because it’s a game I am playing and enjoying with my kids, and I’m looking forward to getting even more into it as they get older.