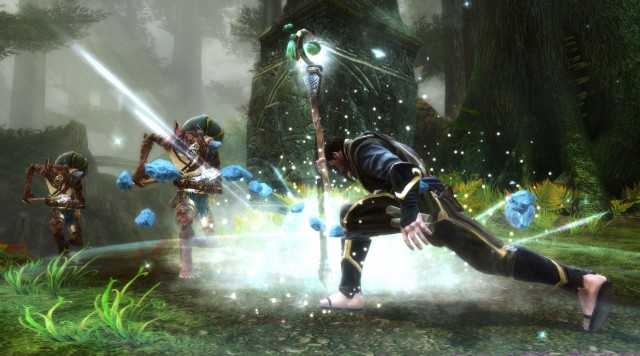 Word out of NPD is that Kingdoms of Amalur: Reckoning has sold roughly 400,000 units in the United States since its launch a couple of months ago. Again this is strictly US sales. Globally, if you believe the unofficial figures, it puts Amalur just under the million sold mark. That’s not bad at all. It’s not a mega hit, and with the time spent developing it, I question what sort of return EA got on the game even with that very respectable number of sales.

Still, regardless of how you look at it, it clearly wasn’t a sales flop. Now, I won’t lie — I didn’t really care for Amalur. It nestled snugly in the “meh” column. But hey what do I know? A lot of people bought and enjoyed the MMO-esque RPG. Godspeed.

But let’s look at a few comparisons:

Skyrim sold over 11 million units.
Fallout 3 sold over 7 million
New Vegas — over 3 million
Dark Souls over 1 million
The original Dragon Age came in around 5 million (DAII not as much)
The Witcher 2 passed the million mark and with the Xbox 360 release will crush that number (a figure Amalur is doubtful ever to get near by the way)
Mass Effect 2 around 5 million
Around 5 million for Fable III (damn people, really?)

The point here isn’t that Amalur wasn’t as popular as these games because EA would quickly tell you, “Hey it’s a new franchise! Lighten up, Francis.”

And EA would be right. But I go back to the used game rant from former THQ suit Richard Browne. Remember when he said this?

The real cost of used games is the death of single player gaming. How do I stop churn? I implement multiplayer and attempt to keep my disc with my consumer playing online against their friends. It works wonderfully for Call of Duty – no doubt it can work wonderfully for me. The problem is, at what cost? Countless millions of dollars would be the answer. Let’s take a great example, one of my favorite game series released on this generation – Uncharted…

The sales figures for these primarily single player role-playing games (Dark Souls is iffy here) takes Browne’s theory and turns it on its head, right? Is this just a phenomena with role-playing games? Could be. Is it that these games are all pretty damn good? Possibly. (I’d fight you on Fable III.)

So we have a few things going on here. Our options seem to consist of:

1) Browne’s just another greedy tool without enough yachts to ski behind.
2) He’s right and although those games all sold well the development costs were so extravagant that they failed to turn ample profit.
3) The people calling the shots in the industry are losing money because they still have absolutely no idea what people want, want they will pay full retail for, and continue to sink money into projects that have no chance at succeeding at a full $60 retail cost. Oh, and that 11 million people bought Skyrim — and it wasn’t a used copy.

Fact is, using Browne’s example, if we’re really at the point when a game like Uncharted can sell over 4 million units worldwide and Sony felt the need to add useless multiplayer in order for it to reach its potential and make more money — the big publishers are royally screwed.