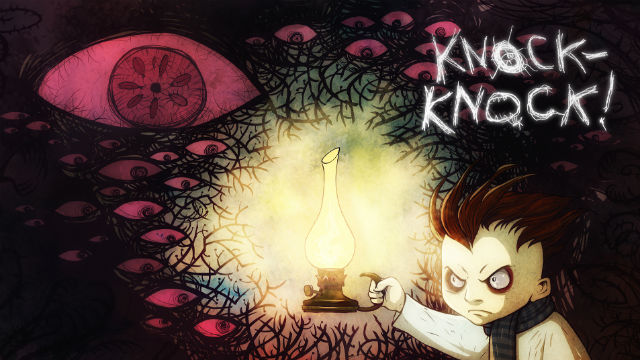 Knock-Knock is the latest game from Russian developer Ice Pick Lodge. That may mean nothing to you: it meant nothing to me when I first downloaded the game. Some of their previous titles did chime a little as names I’d heard now and again – Pathologic or The Void. However I soon came to understand that for those more familiar with this studio and its titles, the name presages a unique combination of inventive gameplay and jarring oddness.

Almost everything you need to know about Knock-Knock can be gleaned from one brief anecdote. About halfway through the game I spent one level wandering aimlessly around a darkened house, turning on lights and began to grow pretty bored. Then I opened a door, walked through and found myself in a dank corridor which I had to wander up and down through a series of more doors before discovering I was back at the start of the tedious level again. Infuriated, I wanted to stop. But I kept on playing.

You’ll spend a lot of time doing nothing in Knock-Knock. Pretty much every other level consists of you walking through a series of perfectly safe rooms to a clock, starting the mechanism and then wandering out into a perfectly safe forest where you’ll perambulate aimlessly until you find yourself back at the same house again. On the alternate levels where a little more is demanded of you, play involves walking into rooms, holding space to fix the lights and occasionally coweing behind furniture while ghoulish haunts drift by in a freakish parody of hide and seek.

The game tells you virtually none of this. You’re left to find out almost all all the mechanics for yourself by guess and by trial and error: what I’ve revealed is the obvious stuff that will become clear after a level or two. And there is more to it than I’ve described. Indeed it’s entirely possible given the way the game offers you absolutely nothing on a plate at all that there are vast abysses of labyrinthine mechanical complexity hidden beneath this simplistic surface.

But I doubt it. I think that play wise, it’s often grindingly repetitive and frustrating, occasionally bordering on the tedious. So why was I compelled to play through to the end? 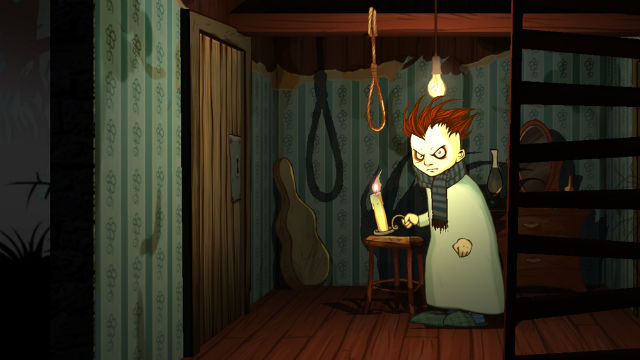 Your avatar in Knock-Knock is some sort of hermetic insomniac who clearly seems himself as a scientist or academic of some kind. What he actually is, it rapidly becomes apparent, is completely deranged. As he makes his nightly rounds through his randomized and ever-shifting house, he whispers to you in an unsettling soprano gibberish about his past and his current predicament. But it’s never clear what, if anything, is reality and what is the creation of a mind badly unhinged by lack of sleep and the suppression of guilty secrets.

You can play through to the end and you won’t get all the answers to the questions that plague the game. You can play through to the end more than once – there are different endings – and you’ll still be wondering what the hell it’s all about. About why there’s a freakish ghost who drags a wheeled leg behind her as she shuffles through the rooms searching for you, or the pitiful apparition of a crying child whose sobs follow you through every level where she appears. About the unsettling inferences to authoritarian dystopias, or the bizarre “fragment of reality” cut scenes you’ll stumble onto occasionally. There are never concrete answers. It isn’t that sort of game.

What it does give you is a lot of intrigue puzzling over the narrative scraps that you’ve been fed and also in marveling over the creative manner in which they’re delivered. It’s kind of hard to describe the way in which the game uses its unreliable narrator and the fourth wall to really communicate the idea of a mind in turmoil. But here’s one example: a missing diary is a crucial component of the plot, and sometimes the game will interrupt the narrator’s ramblings with flashes of diary pages that actually make sense in the context of the conversation. You feel like you’re talking to yourself for no good reason.

While the plot does most of the grunt work in terms of pulling you on through the more turgid bits of gameplay, it’s aided and abetted by the visual and sound design. Don’t let the cartoon graphics fool you: when the lights fizz and go out and eyeballs start coming through the walls you’ll still jump like a five-year old. And the disembodied voices of the phantoms that stalk your home, searching for you, whisper messages you may prefer to forget.

There was more than one occasion in Knock-Knock when I wished that ephemeral things like the narrative and the sound weren’t quite so compelling and I could abandon the game over the poor mechanics. But they are, and I couldn’t. Whether this can really be recommended, especially at launch price, depends strongly on how patient you are with repetitive play. Sadly there’s no demo version to try and find out. But perhaps that’s all part of the mysterious and alienating themes that pervade the game from the outset.