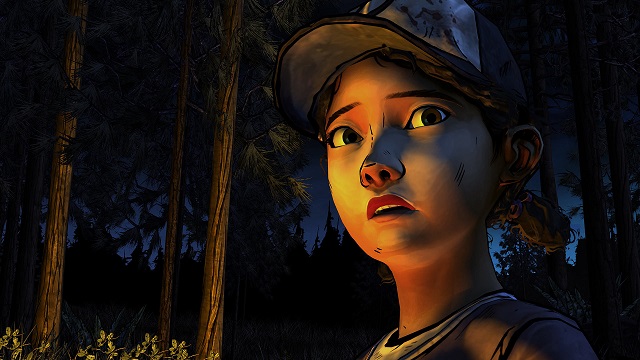 On this week’s JtS, Brandon and I talked a lot, in spoilery details, about the first episode of Telltale’s adventure game, The Walking Dead Season 2. We both like it, but where I cannon-balled into this opening chapter, Brandon though it not as strong as the pilot opener for season 1. It occurs to me that the main reason we differ comes down to the notion that our DNA in these things is entirely different. In season 1, Brandon liked entering a world full of characters he’d never met, getting to know them and their histories and developing Lee from an entirely blank slate. I get that. I think that’s how a majority of players are. Or maybe it’s a question of introvert and extrovert tendencies? Being very much the former, I’ve never been big on discovery. Oh sure, once I discover something and like it, then I wrap it around me and live in it like it were a comfy blanket. So warm. So soft. I am home. And safe.

It’s just very tough for me to get to that point. This is true whether I’m playing games, watching movies, or reading books; especially so when reading books. Part of the reason I used to bury myself in fantasy series like Riftwar, and Wheel of Time and Song of Ice and Fire is because I could live in those worlds for so much longer than I could in your typical modern day work of fiction. There was always another book and I didn’t have to spend time figuring out who everyone was and what they were like. I could just jump in and let the adventure continue. It’s the same reason, when confronted with a Netflix list chock full of movies I’ve never seen, that I’m more likely to seek out a sequel or something by a writer or director I already like, or even something I’ve already seen, than to take a risk on something wholly unknown. And so it is that Season 2 of The Walking Dead plays right into my tendencies.

Even with the past set of character largely absent, the central character of Clementine, the one I am to inhabit this time around, is a character I already know. She’s a character that I’ve already journeyed with, protected, and molded. I know who Clementine is and so, when Telltale tells me it’s time to walk a mile in her shoes, I already know how to do that. This makes season 2’s opening chapter much easier to get into. And what an opening chapter it is. (Modest spoilers to follow.)

The curse of a series like The Walking Dead, regardless of its medium is that it relies on shocking you. Oh my god, can you believe they did that? Oh, that’s so awful, how could they do that? And they’re doing it again, oh my god! Oh shit, they killed Kenny! Bastards!!!

You can get away with that for awhile, but eventually the script flips and the only way to shock your viewer/player is not to shock them. The world of The Walking Dead is brutal and at this point we’re wholly conditioned to accept that. It’s no longer a surprise when the friendly puppy turns feral, or the guy who’s the friendliest to you is the first to get bit. It’s not surprising when zombies appear at the most unlikely and inopportune time. And yet, so far, it still works, and that’s because of Clementine.

Season 1 ensured we invested in this girl. She’s young, yes, but we know she’s not helpless anymore. As Lee, we saw to that (or I did, at least). And so now we take a different kind of journey. The mystery is gone. The world has collapsed and the new equilibrium, such as it is, has settled in. Now it’s truly about how you, as an individual, figure a way to go on living and what you’re going to make of life in this world. Because there’s surviving and there is living.

I’m not sure yet if that’s what Telltale’s end-game is for season 2. It could be I’m reading more into it than is there. Maybe what follows will be another four episodes of torture and human foulness and the worst possible things happening at the worst possible times. Maybe, like the TV show, those are the only bullets they have in their gun and you’ll be able to set your watch by the recurrence of human tragedy. But I don’t think so.

Oh I think that element will be there still –it is The Walking Dead– but I think Telltale has something else to say about humanity and how it handles apocalypse. That journey started with Lee, in the first season. Ultimately, however, Lee only existed to shape and mold Clementine. Now it’s time to see what she’s really learned and how she’ll apply those lessons in the face of new challenges and new tragedies. And it’s precisely because I already know this brave girl so well that, as a player, I already feel well-equipped to help her get there. Clementine’s shoes are worn, but they’re sturdy and comfortable.

This is going to be fun.