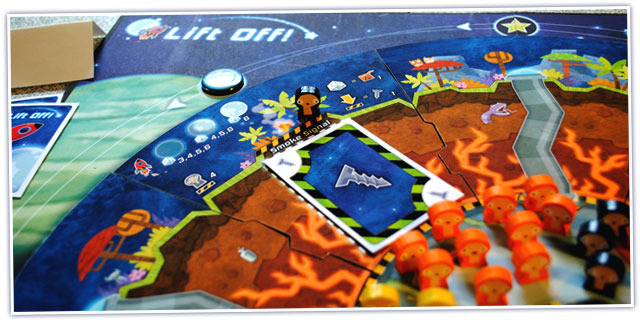 I went into Pencil First Games’ Lift-Off: Get Me Off of this Planet expecting – and wanting – a Survive! style family game with some mildly cutthroat action to spice up situational cooperation . Featuring a roughly similar high-level concept wherein each player is tasked with evacuating an imminent disaster site, this title delivers all of the above but it is a somewhat more complicated design. The box suggests that it is for ages 13 and up, which puts it more squarely in the hobby zone rather than the family zone, and as such the design comes across as something like an “advanced” casual game that may be especially appealing for those wanting Parker Brothers accessibility with more gamer-facing elements.

I was instantly drawn to the colorful, fun illustrations and the overall high visual quality of its circular, modular board and its charming alien pawns. And after reading the rulebook I felt like I had a good handle on how to play because the concepts were familiar. You get two movement points to move your alien from out of the core of a planet that is about to explode. They head to the surface via four tunnels and they are trying to reach four escape points. These four sites vary each game, and they are all completely different. There’s a rocket ship, a jet pack, a trampoline, a bonfire and a star gate as well as a few others available. Your little aliens can also hop up on a platform and wait for a miracle. There’s some fun stuff here.

The catch is that each of these can accommodate a set number of aliens and each requires that players discard resource cards (gasoline or screws) to the site in order to mount the platform. And then there is a second cost, paid by the cards discarded to the escape method, that is required for lift-off. Anyone on the platform can add to the pool to pay for it to activate if there isn’t enough there from the entry fees. Some of the means of escape also require a die roll to be successful. A number of rounds equal to players are run-through before the planet blows up, and the winner is of course the player with the most escaped aliens.

So right there, I think there’s an appealing and accessible game at a base level. Especially because it creates situations where players are kind-of-sort-of working together, promising to move on to a communal platform and help pay the cost if another player pitches in elsewhere. But then there is the jetpack, which one player at a time can pay to go to the platform and immediately leave. It can pay to be completely selfish, or you may get ahead by working with others to get off the planet at a “You and Me+1” rate.

However, there are a couple of points where Lift-Off sort of loses me. One is that the game is filled with Euroglyphics, those language-independent rebuses that tell you what something does in lieu of text. I haven’t yet played a game where I haven’t had to go back to the rulebook to sort out what they are. It isn’t that they are particularly confusing, it’s that every escape area sort of has its own rules and they really need the text provided in the manual to make sense of them. It makes the game come across as more complicated than it actually is, and it more or less cuts younger children out of the game altogether.

Likewise, there are some additional elements that I think bog down the design, in particular this moon phase concept. Each turn, a moon token advances counter-clockwise around the board. When it is shining over a segment, it’s a “full moon” and when it is opposite a segment it is a “new moon”. The position of the moon affects the cost to lift off on some platforms and on others it completely forbids it if it is in the wrong phase. I’ve not felt like this part of the game has added any kind of strategic depth to the game, which is what I suspect was the intention. It just makes it somewhat frustrating and it steers the design away from its best qualities- that whole “let’s you and me pay to get off this rock…oops, left you behind” thing.

I’m also not particularly sold on the action cards. The game offers a really big stack of cards which are either screws, gasoline or action cards. There has to be a lot of cards because discards go onto these launch platforms, not into a discard pile so there’s a lower rate of recycling. But this also means that far too often you wind up with these action cards that aren’t even particularly much fun because they are too common. There’s one that gives you an extra move, there’s one that moves Gargalore the monster out of the core and blocks a launch pad, a tornado that wipes out everyone’s hand and so forth. That’s all usually fun stuff, but the mix feels off, particular in games with lower player counts.

I do like the game despite the complaining but I have one more grievance about it. The Stargate. Not every game will feature this lift-off point and you can toss it into the trash altogether if you want. But I think the game both needs and does not need it, paradoxically. The rules explicitly state that it is the most powerful of the platforms and for good reason – because it fundamentally alters the game process. When the moon comes around to its starting position, you roll a die that can give all players cards, cause all players to lose all of their cards or activate the Stargate, sending everything on it to safety. Or you can roll a result that causes the entire Stargate segment to break off and be replaced with another piece.

On one hand, it’s wildly unbalanced and unstable. On the other, it’s fun and dramatic. But it also requires that moon phase thing that I don’t care for to work. And I don’t like that it changes the game so much, increasing card draws and having such a major impact on the game. It also affects those action cards, because it essentially becomes a dumping ground for unwanted ones- that’s how you pay to put your aliens on it. I find myself alternately wishing that it was mandatory and then thinking that it’s a patch-up design element that just didn’t get tested enough. I wouldn’t be surprised if it were made optional to head off criticism of its volatility.

There are variants included in the rules so you can change up the platforms and action cards for different flavors of game. You can toss out the platforms you don’t like, pare down the action cards and work out whatever fixes you like. But to be honest when I see those kinds of “play it however you want” missives I feel like it is evidence that there is not a firm sense of direction or intent in the design. I think there is some good, fun gameplay in Lift-Off, but in the end it is a family-style game made for gamers despite being billed as a “gateway” game. There’s just a little too much going on to get close to that kind of simple, easy to reach fun that made games like Survive! such enduring classics.