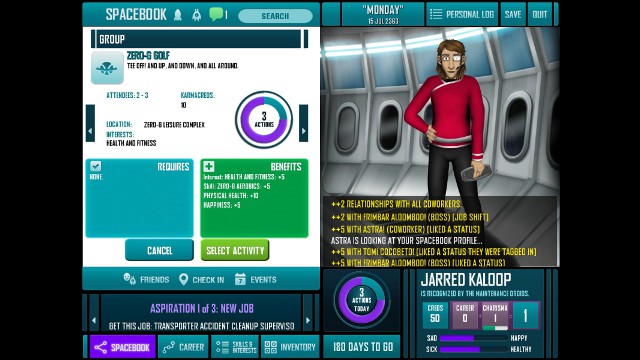 This probably makes me sound old, but I don’t get Facebook. The entire notion of using a publicly available software platform to reconnect with people I have made no effort to contact in the past two decades doesn’t make much sense to me. Sure, I’m on it, who isn’t, but I don’t use it to do more than occasionally chat with old fraternity brothers and other folks here and there. Let me put it this way, my sister is on Facebook and I had no idea up until I got an email reminding me about her birthday.

After playing Redshirt, the upcoming social sim in space from one woman developer shop The Tiniest Shark, I understand Facebook. I have seen the face of evil and I “Liked” it. 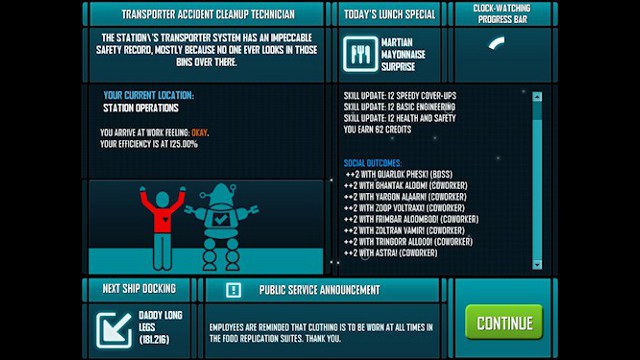 Redshirt is a social media/career climbing sim in which you take the place of a lowly transporter tube maintenance worker who spends as much time on Spacebook, the future’s version of Facebook, as you do cleaning up after errant transporter tube mishaps. Frankly, I don’t know which is worse, the fact that there regularly are transporter tube mishaps or that we still have Facebook thousands of years into the future. The goal of the game is simple, get as many people on Spacebook to like you as much as possible while at the same time climb the career ladder to the ultimate position of assistant to the commander of the space station. Oh, there’s also a strong possibility that some major calamity is going to befall the station.

I may not spend a lot of time on Facebook, but I’ve spent enough time on it to recognize how well Spacebook mimics the banal mixture of friend shout-outs, pithy inspirational quotes and “here’s what I’m doing every second” updates that permeate most people’s Facebook feeds. Every time you start up a new game an entire space station of different aliens is randomly generated, and all of these aliens have different interests. They’re all also already carved up into different social circles. You’re no different and after selecting an alien race, name and gender (if applicable) you’ll have your own circle of friends.

Every day you have a certain number of actions you can spend to raise your social standings. You can Like comments, create group events, engage in simulated holo-events to raise your statistics in various areas of interest as well as spend quiet time alone reading a book or wandering the halls in a desperate attempt to meet up with other people. On weekdays you go to work, with your job performance related to how happy and healthy you are. On weekends you have more free time and more actions to try and get everyone in the universe to love you. Occasionally you go on away missions. They rarely end well for the other members of your party. 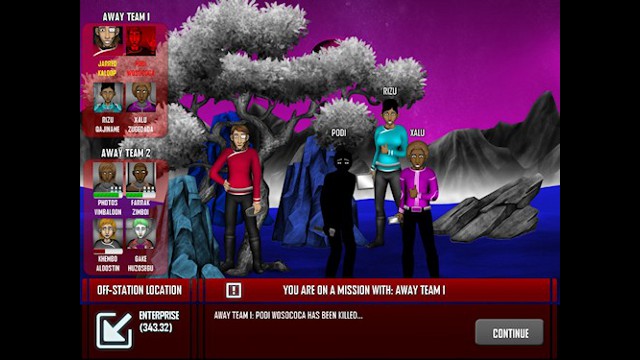 Not being a Facebook user, I’ll admit that I got off to a rough start. I organized events without seeing if the people I was inviting were interested in the event or Spacebook friends with me. They weren’t, on both counts, and their rejection stung deeply. My happiness stat plummeted as those I invited rejected me and those I didn’t invite got pissed about being rejected. As a result of lowered happiness my focus at work wavered and I started screwing up my job causing my coworkers to hate me which in turn added to my unhappiness. I also wasn’t eating which made me unhealthy. In a brilliant move, the game makes you eat every day, rather than handle it automatically, forcing you to tear yourself away from your Spacebook feed to tend to basic bodily functions. Sadly, I did not do so every day and I paid the price for it.

It’s a vicious cycle and it underscores the truth of social media platforms, namely that social media isn’t about connecting with people, it’s about validation. People care about having friends so that they have the highest possible chance of having something they said or wrote commented on in a positive manner. There’s a radio station here in Atlanta that has a commercial talking about how your day was great because three people ReTweeted something you said and the same combination of ego validation and happiness is on full display here. If people like you, you’re happy. If they don’t, you’re not. Eventually I was able to turn my shame spiral around and got some friends and started doing well enough at work to get a new job with an entirely new circle of friends. I also bought a robocat which gave me a daily boost of happiness, no doubt via LOLrobocat pictures.

As you go about your social climbing you’ll have three tasks at a time to complete. Maybe it’s to get a new job, maybe it’s to become friends with someone. One I had was to get mentioned by a certain alien. I wasn’t friends with him so I had to see who he was friends with to see if maybe there was an in there. No dice, so I started liking his responses in hopes that I could get a high enough standing with him to get him to accept a friend request. If I could get him on my friends list, I could invite him to an event, one specifically chosen with his likes in mind, likes I was able to see via his profile on Spacebook. Once I had him in an event, getting a mention was all but wrapped up. 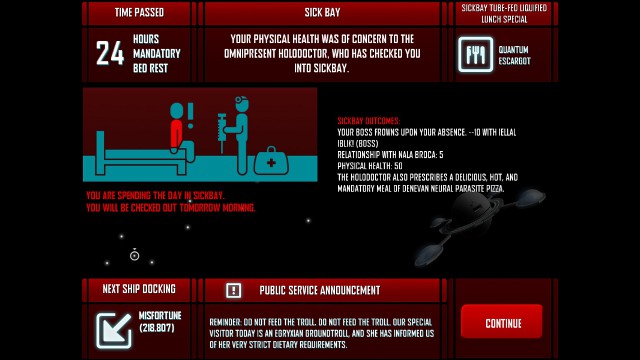 As I was working through the social hoops to make this happen it struck me just how goddamned creepy the whole thing was. I mean, I was basically cyber-stalking this dude, trying to become friends with him not out of a genuine need to connect with another alien, or because we shared interests but because I wanted him talking about me. It also underscored how easy it is for people on these sites who aren’t friends with you to see who you know and don’t know and what you like and don’t like. Sure, the real Facebook has privacy settings, but from what I’ve seen of Facebook, either people don’t know about them or don’t care.

As my social climbing continued the game took an unfortunate turn and crashed on me (it’s an alpha so this isn’t entirely unexpected) and while I was irritated that I had lost so much social progress, I was ultimate relieved because once I started playing this thing I couldn’t stop. When I told my wife about the game she said that it didn’t sound like something I’d like and I didn’t think I’d be as interested as I was, but I was hooked. I had to keep checking to see what people were saying about me, I had to try and figure out who I could get to go to dinner with me, who I could get to add me to their friends list, how I could become more interesting to get people to like me.

The game is set to release on PC, and MAC initially with an iPad release to follow. I think I’d be best served by the iPad version as being able to pop in throughout the day and sim a few days of actions is preferable to a multi-hour session of social climbing and impending doom hinted at by the game’s story. Also, I can’t handle rejection in such large doses.

Redshirt will be released in the coming months but in the meantime you can check out the game’s site, as well Redshirt’s Facebook page, irony be damned.

2 thoughts to “In Space No One Can Hear You “Like””